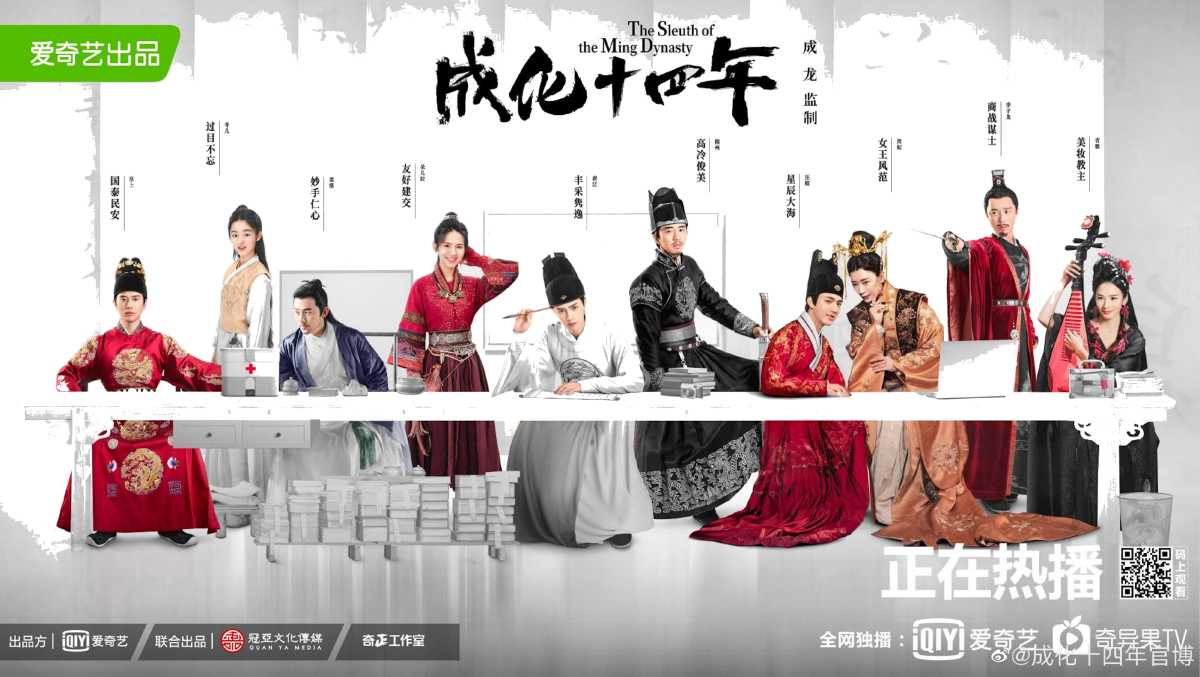 The Sleuth of Ming Dynasty is drawing major attention because of its unique flavor of crime thriller coupled with the lively romance between main leads Tang Fan and Sui Zhou. Add in the cunning Western Depot Commander Wang Zhi, and we have a potboiler of mystery, friendship, betrayal, and romance. Let’s review Episodes 31 to 40, as we get closer to the controversy plaguing the Ming Dynasty.

Storyline
Tang Fan and Sui Zhou join hands yet again to figure out the mystery behind the missing ice cubes from the Royal Cellar. In this pursuit, following the various clues lead them to Ms. Cui from the Huanyi Brothel. On the other hand, Qing Ge, Li Zilong’s daughter, joins the Brothel to keep an eye on Tang Fan. Ms. Cui disguises Tang Fan so that he could meet with the Dealer, Mr. Jin, who sells the ice illegally.

Tang Fan and Sui Zhou somehow convince Mr. Jin, who shares his secrets. But they are ambushed by Li Zilong’s men. Sui Zhou saves the day, and Pei somehow saves Mr. Jin. Mr. Jin it turns out is a woman disguised as a man, to show her gratitude she explains about her heritage and also the secret tunnel, her ancestors build a secret tunnel behind the Royal Cellar.

Sui Zhou suddenly starts having nightmares because of his PTSD. The family rallies around to support him. At the same time, we learn more about Ding Man, the Main Assistant of The Emperor. It turns out that Ding Man is actually Aras, an Oirat Royal, and also Dora’s lover. He has been spying on the Emperor and exchanging important information about Royal affairs as well as the deadly explosive Bolang with the Oirats. They capture Wang Xian, an important official in the Ministry of War, who may seem dim-witted, but is actually a ‘savant’ (someone who is or appears to be exceptionally good at one or a few narrow skills) when it comes to weapons design and implementation. He also happens to be the husband of Princess Gu’an, the Emperor’s cousin. He is the main catalyst behind deadly Ming secret weapons.

Our dynamic trio team up again to bring Wang Xian back safely. While working, Tang Fan figures out everything about Aras and goes to Dora’s home to confront him. However, Aras captures Tang Fan to escape with the Bolang he seized from Wang Xian. The plan goes awry when the Western Depot surrounds them. In their shuffle, however, the Bolang gets activated, and Dora pushes Tang out of the carriage to save him from the inevitable explosion.

We are shown a flashback from three years back, where Tang Fan is pushed back to Fourth Rank because the Officials are scared of his intelligence. Sui Zhou has just joined the Imperial Guards while Wang Zhi works as the Emperor’s Assistant. A similar blast at the Ministry of War causes mass destruction, and our trio cross paths unknowingly.

We return to the present where Tang Fan goes berserk in grief and guilty feelings for the death of Dora. He even goes on to blame Sui Zhou and leaves home. Wang Zhi finds and forces him to face his demons by solving the case. Tang then takes over his Magistrate’s Duty and begins with questioning the rescued Wang Xian.

Sui Zhou withdraws into himself because of his ongoing feud with Tang Fan. He suffers major mood swings and is unable to sleep and eat. Dr. Pei surmises that Sui Zhou’s condition is getting worse because of Tang Fan’s absence, and Dong tries very hard to support Sui Zhou despite his repeated rude behavior towards her. Sui even hurts his own assistant, who tries to stop him from hurting a witness.

However, The pair of Tang Fan and Sui Zhou get back together when Dong figures out that Zhang Gongshu, Wang Xian’s Assistant, is responsible for the manufacturing of Bolangs. Li Zilong, however, correctly guesses that Zhang, in reality, is Princess Gu’an, who is out to destroy the Capital and avenge her father’s death.

Thus begins a cat and mouse game, where Gu’an seeks Li Zilong’s help to rescue her husband. The Western Depot is attacked, and Li Zilong rescues Guan with Wang Xian. While trying to kill Tang Fan, however, Sui Zhou arrives and valiantly fights with Zilong’s men. Finally, Tang Fan’s and his feud comes to an end.

Li Zilong forces Wang Xian to finish the Bolangs that Gu’an exchanged for Xian’s freedom. Later, he forces them to enjoy a ride on the flying machine he has specially designed for them. The machine is rigged with a Bolang to leave nothing to chance. Tang Fan traces the dates and detects the location where Gu’an might be hiding. However, before they arrive onsite, both Gu’an and Wang Xian are seated on the machine, which takes off and explodes in the sky.

Gu’an and Wang Xian’s love story would have been beautiful if she wasn’t hell-bent on revenge and instead focused on living a happy life with the man who truly loved her beyond all else. When we are too focused on negative emotions, we forget about the important people in our lives, and eventually, life becomes a living hell.

The Chemistry Between The Main Leads

We got oodles of chemistry and romance in the current episodes. Sui Zhou is surprised at how dazzling beautiful a ‘feminine’ Tang Fan looks. The main lead’s Darren Chen and Fu Meng Po’s camaraderie is apparent from their online exchange. Darren Chen posted the following picture on Weibo with the caption, “By the way, the woman in this dress is not me, but my distant relative, Ms. Cui.” Fu MengPo posted a second picture in response and commented with “Really?” teasing him about it. Darren promptly replied back with, “Well, my relatives are really good-looking.”

The picture of Fu Meng Po with Darren Chen caused a lot of commotion as fans were excited to see the two together apparently ‘shipped.’ In their reaction video, when asked how he felt seeing Darren in women’s clothing for the first time, Fu Meng Po frankly accepted that “It suited him well, unexpectedly suitable.” Darren got adorably shy when he was asked to repeat his dialogue “Honey” to Fu Meng Po. When Liu Yao Yuan was asked about how he felt seeing Darren in women’s dress, he replied, “It looked beautiful, because Darren is quite good looking.”

The next set of questions is related to the scene where Wang Zhi issues an order to shoot, even with Tang Fan still in the carriage with Dora and Aras. When asked about how Sui Zhou and Wang Zhi’s feelings differ for Tang Fan, Fu Meng Po replied that “Wang Zhi would be more concerned about the bigger picture while Sui Zhou’s love is pure. He would want to protect his person.” On the other hand, Liu Yao Yuan said, “By stopping Sui Zhou, he was trying to save him. Because if Tang Fan’s death was confirmed, so Wang Zhi at least wanted to save Sui Zhou’s life.”

Talking about the scene where Sui Zhou holds back Tang Fan forcibly from running to Dora, Darren accepts that the scene was difficult “Only a really close relationship between the characters could lead to this kind of scene. Sui Zhou is Tang Fan’s target for venting.” Fu Meng Po openly accepts that ” When two people are in love, Sui Zhou won’t worry about the anger. His only concern would be to make sure that Tang Fan vents his anger, and he is safe.”

While talking about the scene where a scared Tang Fan says to an injured Sui Zhou, “Who will cook for me if you die?” Fu Meng Po answers, “That just shows how much Tang Fan depends on him. Even if tomorrow Sui Zhou didn’t cook for him, Tang Fan wouldn’t leave him. This shows how deep their bond is, and hence at such a moment of high tension, they speak such quotidian things.”
Darren accepts saying that “‘ Who will cook for me’ or ‘Your noise is killing me’ might seem unimportant. They are like the air, not important at the moment, but you can’t exist without it.”

My favorite scene is the above one, where Sui Zhou rushes to help a fainted Tang Fan. Sui Zhou breaks down and cries because when Fan doesn’t wake up. So like the gourmet couple they are, Sui Zhou promises to take him home for dinner with Dong. Right away, Tang Fan wakes up and demands “Minced Noodles.” Again it might seem funny, but with the sort of relationship they have, it like confessing their love for each other.

Liu Yao Yuan, on the other hand, is the biggest Sui-Tang shipper. He proudly admits that he was the first to ‘ship’ them, and he would lead the shippers too. However, Liu Yao Yuan also laments being single. When asked how he feels about the fans shipping Wang Zhi with Tang Fan, he jokingly admits, “That happens occasionally. Whenever Wang Zhi regains consciousness after fainting from an explosion, his first concern is always Tang Fan, who never bothers to check on him, though.” When inquired about Wang Zhi’s protective instincts for Tang Fan, Liu Yao again laughed it off, saying, “Because Tang Fan is good looking and that awakens all kinds of protective instincts in Wang Zhi.” Talking about the chemistry between Wang Zhi and Ding Rong, Liu Yao admits, “Wang Zhi does love Ding Rong, but his love for the Emperor is greater.”

Keep following this space to learn more about the forthcoming episodes as our Sleuth Magistrate Tang Fan pairs up with lover Sui Zhou and cunning friend Wang Zhi for the final showdown with Li Zilong.