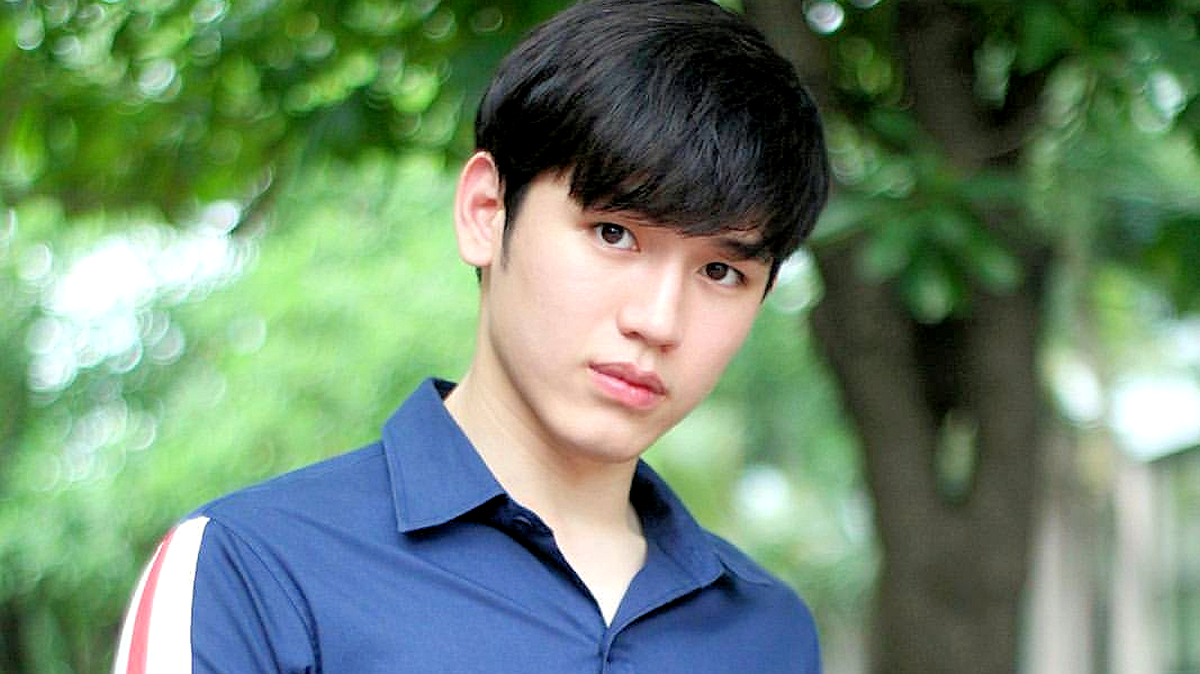 Newwie Thitipoom Techaapaikhun – ฐิติภูมิ เตชะอภัยคุณ, was born January 30th, 1993 in Bangkok, Thailand, and is a Thai actor, TV host, and model. He became popular with his portrayal of Kao (Main Role) in Dark Blue Kiss (2019), which is a sequel to Kiss The Series (2016) and Kiss Me Again (2018).

At age 3, Newwiee moved to Yala Province, where he completed his junior high school education in Kanarasadornbumroong Yala School. He later moved to Hat Yai, Songkhla Province, where he completed his high school education at Hat Yai Witthayalai School. He graduated with a Bachelor’s Degree in Electrical Engineering from the Faculty of Engineering and a Master’s Degree in Business Administration from the Faculty of Commerce and Accountancy, both at Chulalongkorn University.

Newwiee began working as a model in the entertainment industry and became one of the new hosts of the Bang Channel program Five Live Fresh in 2013. Newwiee often appears as a cameo in different series and movies of Thailand. He appeared as a restaurant server in the movie in “Secret Love,” where Korawit Boonsri (Gun), known as Green in 2gether: The Series, was the main role actor.

He made his acting debut by playing the Support role of Ray in Room Alone: The Series (2014), a series by GMMtv.

In 2017, he got the main role of Apo in Water Boyy: The Series, a TV remake of a film with the same name.  The series starts smoothly, introducing a whole array of characters from Ocean College. Newwiee (Apo) was the latest swimmer to join the club together with his roommate – Waii (Earth Pirapat Watthanasetsiri), the most popular member and captain of the Ocean College swimming club. This kicks off the story of the series, which revolves around their efforts to save the swimming club from being disbanded by the school.

Newwie gets the entire spotlight as a main lead, and most of the viewers recognized the improvement of Newwie’s acting in Water Boyy from Sotus: The Series. He was able to do a good job of showing emotions just through actions, looks, and his body – dialog not always needed. He also gave his character Apo life and made him more believable. He had shown a great improvement in a short time, and most viewers were very surprised and enjoyed his performance.

However, what established Newwiee’s mastery as an actor was his portrayal of Kao as the main role in the most anticipated BL series of 2019, the third installment of Kiss: The Series titled Dark Blue Kiss (DBK) (2019), alongside Tawan Vihokratana who played the role as Pete. Enormous viewing audiences agreed that one of the main strengths in DBK is the affection between its two lead actors Newwie and Tay, portraying sensitive, intelligent Kao and hot-tempered, tough guy Pete, respectively. The two are very likable, popular actors, and have amazing chemistry that makes them one of the greatest Thai BL couples.

At the start of this sequel, set three years later, it was centered on Pete, and Kao’s already established loving and trusting relationship. Kao and Pete remain closeted, discreet in front of most of their friends and family. Pete wants to take the next step and come out, while Kao resists firmly and won’t be pressured. The challenge for the couple is to figure out how to tell their families about each other while also discovering what they want to do in the future.

Newwie’s role as Kao got a lot of flack from viewers for being too passive, accepting or allowing what happens or what others do, without active response or resistance. Most serious critics say positive things like “Newwie gives credence to his character, which is well-depicted with conviction, which makes Kao more interesting and memorable.“

Newwie had some of his best work in scenes from Dark Blue Kiss that surprised most of his fans.

What a wonderful moment of unconditional love between a mother and son! That scene where Kao confronts his mother about the whole fiasco was the talk of the BL Fans. Newwie’s acting and expression were delivered with the perfect dose of gravitas and emotional sincerity. Viewers had never seen a performance like that from him before.

Newwie, together with Tay, delivered well-executed, and solid performances. No question about the chemistry between Pete and Kao.They have an undeniable chemistry that pops off the screen and are talented actors that can deliver any scene required of them. Whether dramatic, romantic or even something light and funny.

Aside from the Dark Blue Kiss in 2019, in that same year, Newwie played the main role in both Wolf as the character Plan, and Win, in Love Beyond Frontier. He also starred in Classic Again, a Thai remake of the 2003 South Korean romantic drama The Classic, and this 2020 he is working on I Need Romance 3 as Alan (main role).

In 2018, Newwie was seen in public with and was dating a rumored girlfriend. Some toxic fans cannot handle that fact because they were already ‘in love’ with the ‘ship’ of #TAYNEW, which started from the first two Kiss series. Fans actually started Tweeting hate messages, comments, and even threats to Newwie and his rumored girlfriend. Newwiee was stressed and made his relationship official, but some fans still had the audacity to show hatred towards him for even having a girlfriend.

Newwiee even deactivated his Instagram and posted a message:

Newwie and Kik have been together for a long time. Newwiee and Kik started dating at least from May 2018, both before Kik broke up with her ex.

Toxic fans argue that Tay is single, and Newwie was his first kiss. Fans felt that Newwie betrayed Tay, especially when they have separate series to promote. People actually thought Newwie left Tay because of his girlfriend. For authentic TayNew supporters, they understand and believe that Tay & New are both best friends, and they have a different connection than other BL couples. They do not do fan service; they do not say they’re in love with each other, and most importantly, they DO have a strong bond as friends, which remains.

Newwiee defended himself and put his work on the line to stop the ugly messages and threats. He took the risk of losing his job to protect his girlfriend and family. It was a devastating year for Newwiee to be on the hot seat that year due to his PRIVATE LIFE.

Newwie showed that he is brave when he made his relationship official and protected his girlfriend and family. The mere fact that Newwiee graduated as an engineer. He’s a sharp individual; he thinks logical thoughts; he understands that his work as an actor is totally different from his private life. The fans should accept that as well and stop interfering in his private life.

Newwiee authentic supporters never left him. Instead, they lift him up and supported him. Newwiee, for them, is someone who only does his work to the best of his ever-improving abilities. He continues to work professionally with passion and dedication. The chemistry that he has with Tay is so magical that fans continue to lavish praise and love on them both. He has regained his emotional strength, and with the support that he has around him, he may come back together with his BL partner Tay. Thanks to all the real supporters who appreciate their talents and know the difference between their work and private lives.

His Instagram, up to date, is active with 2.1 million followers. Fans see him again with a bigger smile on his face, and he’s entertaining them with his ‘groove dance’ on Tiktok. Newwie said in an interview months ago that he broke up with his girlfriend, anyway. As long as he is true to himself, he inspires and makes people happy, whether he is in a relationship or not. What matters is that Newwiee continues to be a promising BL Actor.

Newwie teaches BL fans that an actor is good enough if they entertain fans watching their shows. Authentic BL Fans should respect actors and do not need to go beyond the shows because, in reality, it is for entertainment alone.