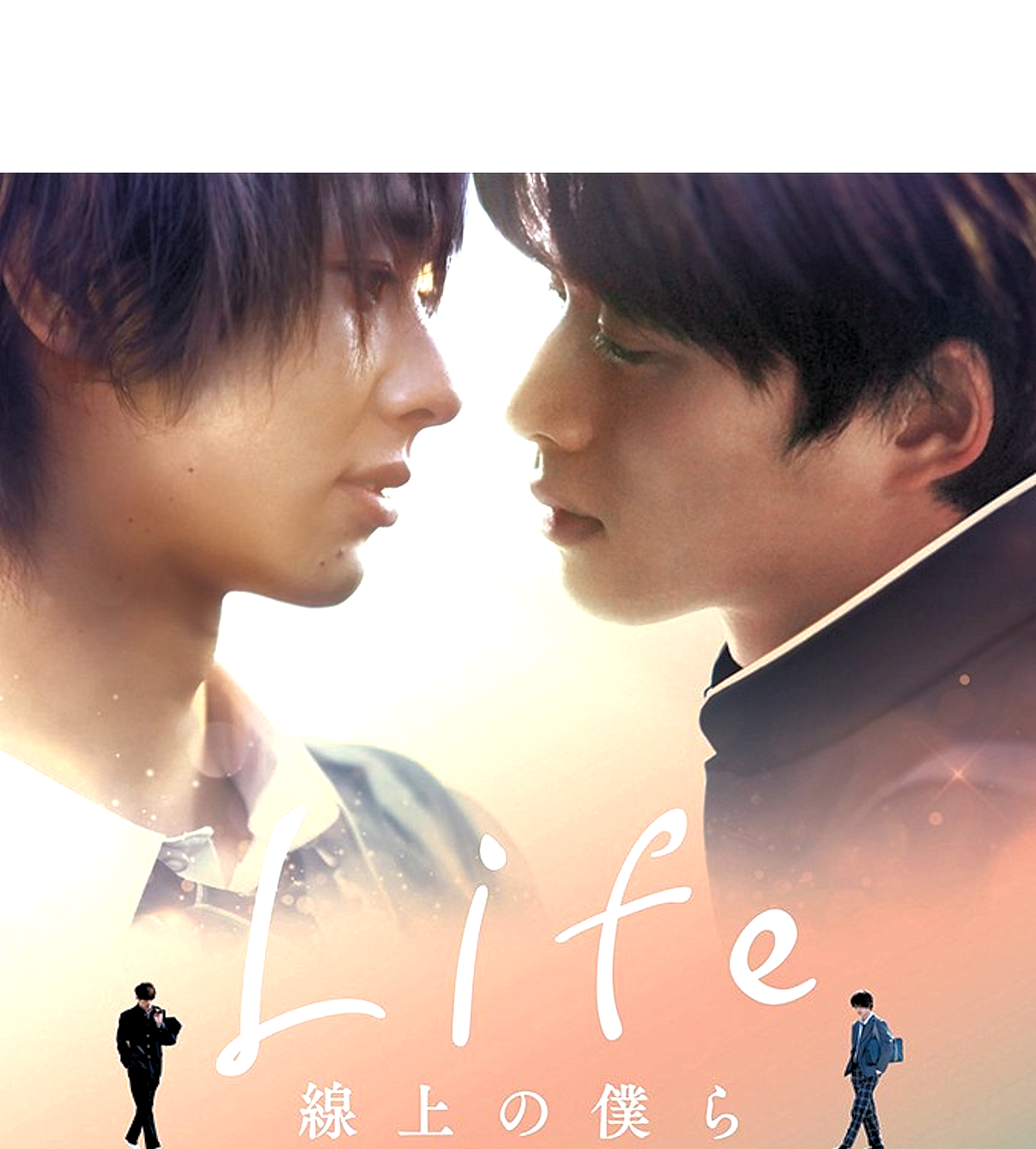 This Thursday, the Japanese BL miniseries ( 4 episodes) “Life ~ Love on the Line” premiered on Viki and is now fully subbed for the international audience to watch. The drama is based on the hit manga title of the same name by Miya Tokokura, which was released in 2017.

Highschooler Ito (played by Shirasu Jin) is a serious, hard-working student. On his way home from school, Ito often plays a sort of make-believe game, challenging himself to walk along a long white line in the road.

One day, while he is playing his lonely game, he comes across another high school student, the naïve but friendly Nishi (played by Raiku) playing a similar game of white line. Ito instantly falls for Nishi’s uncomplicated charms and his silly rules for the same game that Ito had always taken to have serious scenarios in his head.

From the poster and the first episode we can see that the tale follows the two boys as they transition out of late childhood, and into adulthood through three ages: 17, 19 and 28 years, when they are forced to take on brand new challenges that test their love at every turn.

Shirasu Jin has received a lot of praise for his role in one of the recent hit Japanese dramas. When performing as Ito, he very accurately shows the reserved, brooding face for the world, the happy smiles for Nishi, and the frustrations of being away.

This show seems to be the first for Raiku as a Main Lead, and he has equaled Ito well in most aspects. There is a sense of joy, respect, and a little playfulness as he talks to Ito. He definitely looks the part of a guy who might appear childlike in his behavior, but is clear with what he wants and to focus only on the world as he sees fit.

We are just little dots that were forced into this world like this, helpless and lonely. That is why someday we search for another dot to connect with, someone that we can form a line with and live on…

The show starts with a scene where one of the characters is crying and thinking of a promise made long ago. This scene sorta gives me a little ominous feeling regarding the ending of the show (fingers crossed), but you never know.

As Ito and Nishi walk on the same white line towards each other, from opposite directions, the aerial shot for the scene is beautifully done. It immediately puts focus on the characters and the line and setting for their frequent meetings. While Nishi’s reason for not stepping out of line on that day is Sharks, which are shown by really good animation, Ito is keeping himself safe from the Ice swords!

That’s the game the boys love to play, and they continue to meet at the same point on the white line and help each other to avoid death in their game. To find someone who understands the rules of your game and can play it the same way is such a great feeling. It reflects in the joy on the boys’ faces whenever they see each other on the line.  Gradually Ito starts looking forward to these meetings daily and makes sure to be waiting for Nishi after school every day. The scene where the boys keep sitting on the same line and spend a whole evening talking to each other feels so pure and natural. Frustrated by his own feelings and the short meetings, Ito kisses Nishi and then runs away, without bothering to not fall off the line. This event was such a beautiful way to portray the line Ito had crossed that day – both literally and metaphorically.

Even though he is confused about his feelings for Nishi, and has no clue how Nishi feels about his impulsive expression of love, Ito refuses the proposal of the most popular girl from his class, much to the disappointment of his best buddies.  Later, when Nishi tracks down Ito, he appears to be mad, but Ito is shocked to realize the reason for Nishi being mad at him.

And so, we see the boys agreeing to change their game where both can walk hand in hand. There are some cute happy dates shown in the very end along the season and year change around these two guys who seem to be head-over-heels in love with each other.

As expected from Japanese BLs, the show seems to focus more on just the couple and to follow their story through different phases of love and life. It allows the viewer to connect with the characters and to start feeling the same emotions as they do. Ito’s panic about his thoughts and his inability to control himself is well matched by Nishi’s openness and innocence. The 20-minute episode #1 has managed to pack a lot of sweetness that leaves you smiling as the show ends. Among the mostly neutral tones of the scenes, the sunlight on the faces of the boys meeting every evening on the white line hits me differently as it shows them coming into the light of each other.

The music is soothing and matches the mood of the show very well. I am looking forward to hearing more of the same in the next episodes.  The preview for the next episode seems to be a little intense, and I can’t wait to know more about Ito & Nishi and to see the troubles they face for their love.