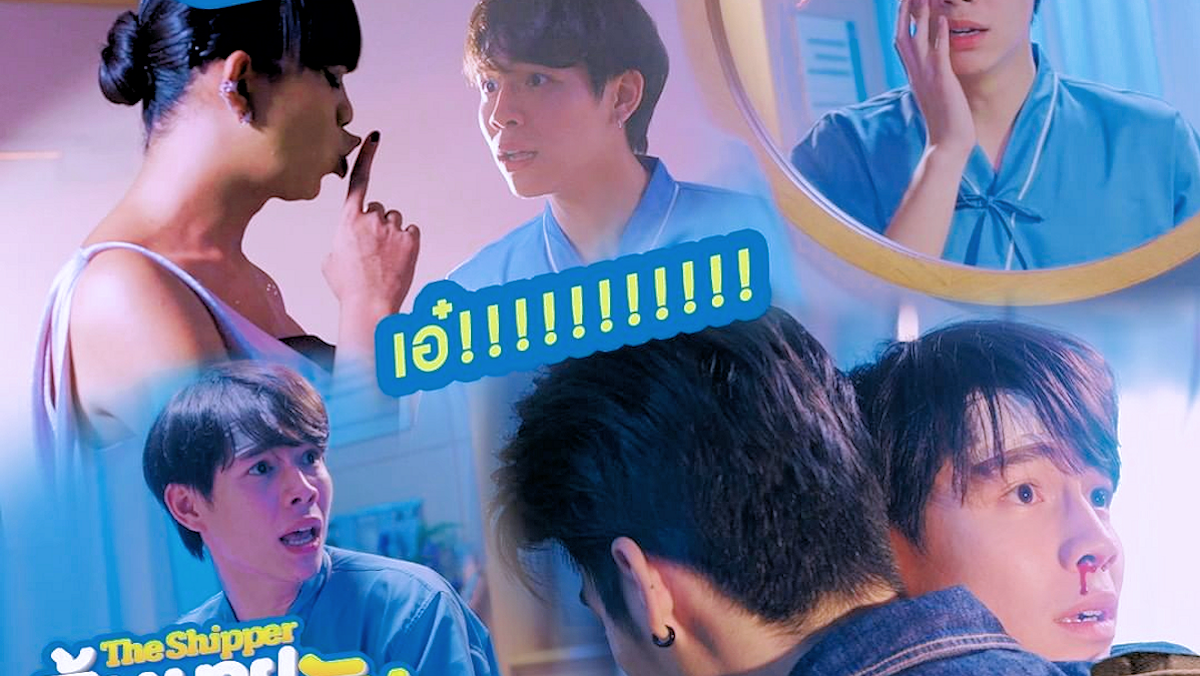 The second episode of “The Shipper” GMMtv’s Friday BL series is back with the show right after Pan wakes up in the body of P’Kim. Queue massive amounts of insanity and funny, awkward moments as Episode 2 does what few BL’s do today by telling you about each character instead of showing it. Whether that’s a good or bad thing remains to be seen.

The Main girl character with the wicked side pony that would put Ariana Grande to shame is Pan played by GMMtv alumni Prigkhing Sureeyaret (Blacklist).  Her whip-smart boy shipping partner with cute glasses is Soda, played by Ploy Kanyarat. Their ‘frienemy’ who clearly has the hots for one of the shippers is Khet, played by everyone’s favorite BL actor Ohm Pawat.  The sassy and downright wicked Angel of Death is played by Jeanie Panham. The hot werewolf and bad boy of their fanfic dreams is the character Way, played by Fluke Pusit.  The Vampire and smartest boy in their BL stories is P’Kim, played by First Kanaphan. And the evil but beautiful girlfriend of Way is Pingping, played by View Benyapa.

Picking up right where ep 1 ended with Pan waking up in the body of P’Kim, she makes the “Ehhh” sound that I both love and hate. I love it cause it’s hilarious, I’m not too fond of it cause I could do a drinking game to how many times I hear it and come out needing a trip to the rehab clinic. Almost instantaneously and with a movie’s star entrance comes Angel of Death. Cut off in the middle of her entrance by Pan, who has no time for that and wants back in her body now! The two have catty words over the fact that Yes, it’s a mistake for the bodies to be switched, and Yes, the Angel of Death has no idea how to fix it. Before anything else can be discussed, the door opens and haloed by light is Way.

To be honest, my gaydar pinged the moment it was made clear this wasn’t a dream sequence. But to see Way’s reaction to KimPan being OK made me pause and have a talk with myself about not shipping every positive male friendship in a BL show. Then I say to hell with that the moment KimPan’s nose gushed blood, and Way yanked his shirt up in slow-motion to wipe the blood away. (No, I didn’t rewind it and watch it again! As If who would do that …me!) Of course, KimPan falls, and Way catches her/him (this will get confusing I bet), and Angel of Death asks if She/he is OK with the switch. KimPan makes the “OK” sign, and I shared in Angel of Death’s jealousy played perfectly well by a smug-faced Jeanie.

In typical body switch fashion, a doctor is used to display all the reasons KimPan will act differently. Way acting as boyfriend *cough* I mean friend listens dutifully. When KimPan uses feminine Thai words, the doctor and Way are confused, but He/She quickly recovers, and Way asks if this is unusual. Before anything else can happen, Angel of Death reappears, having taken a liking to Way (get in line, Sis). She pantomimes things like no one else can see her but KimPan who kicks at her. KimPan fed up with this drags the Angel away.

The two squabble again before the Angel of Death turns on KimPan, explaining the only rule is he/she can tell no one about this. Of course, being an Angel, she inquires about seeing KimPan’s penis in which KimPan hastily refuses.  The reaction by KimPan reminds viewers what I think is important. The characters are around 16 years old.  It rubs me the wrong way that these teenagers are being portrayed sexually, but its GMMtv so…

A scene shows KimPan uses the bathroom as P’Kim before realizing P’Kim is in her body.  How he/she finds the room with her body and Soda and her dad is beyond me.  But a heartfelt scene shows Soda and Dad waiting for PanKim to awaken. Returning to Way, KimPan is shocked to learn P’Kim has a brother and cue the “Ehhh” when he/she sees its Khet.  There is a flashback scene showing she knew the last names were the same but nothing else.

Khet, unlike Way, notices right off the bat something is off with his older brother. But I want to point out that casting a 20-year-old to play a 15-year-old is a bit ridiculous.  I love Ohm, but he is too old for the role, and it shows in his acting. (Editor’s Note: It happens all the time in Thai BL. Just look at the real ages of the ‘students’ in Taiwanese BLs) The two head home and KimPan has to outsmart him before they can rest easy in their room. School is a different matter as P’Kim is the smartest boy in school, and Pan ignored it to write the fanfic.

In an awkward series of moments showing Pan had no idea how P’Kim actually lived, it’s clear she’s in for a rude awakening.  Winding up in the nurse’s office with Way watching over him, Pingping appears and explains all she has done for them. In typical mean girl fashion, she demands an apology from Way in front of everyone present. Kimpan loses it and shouts, “Shut it, Bitch,” of which I approved.

The writers wrote two-dimensional characters to pepper the cast and spend little time on them. So seeing Pingping nag and complain does nothing but make me dislike her more, which was probably the intention. Demanding the Angel of Death who appeared with her scythe to come with her, He/she storms off past a spying Khet.  It’s here we get to see Pan as Pan again, and in a heartfelt confession, she admits her flaw. They flash back and forth between boy and girl, which would have been fine if the boy was crying the same as the girl version was. She was so obsessed with Way and P’Kim she didn’t actually take the time to know them or that her friend is related to him.

Pan, as a character, really gets under my skin because the show depicts her as an empty-headed girl who fantasizes about two men having sex and being cute, but not much else. In an earlier scene, you see her nameless father (seriously name that man ‘GMMtv’), and Soda calls her strong, but you never actually see it. It’s the same with Khet, he appeared as a practical joker in the first episode but we as viewers are told there is more to him. Outside of his showing, he cares about his mother I don’t actually see much in his character (Episode 3 fixes this).

The final part of the episode is when Khet confronts KimPan about having changed. He heard the conversation between Angel of Death and him/her in the bathroom. It should be the game changer moment because she flat out says she isn’t P’Kim! But Khet seems to have ignored this and points out three different things, one which is important!!! P’Kim has a Dairy Allergy, but KimPan is drinking milk! Shouldn’t he/she be physically ill or reacting to this at all. Instead, we get Khet getting to close to HIS BROTHER in an intense moment of staring. Thankfully we see Pan instead of Kim at this moment that lasts a cringe-inducing amount of time. Before Khet realizes what he is about to do (kiss his brother) and backs off.

Instead of addressing any of his points, he pronounces KimPan sick and puts him to bed with medicine and water. He does acknowledge the change but says he prefers it. This scene had me scratching my head cause that was a total 180 on his part.

My Thoughts on This Show

Episode 2 carries the zany almost anime-like cuteness of the first episode. It’s not well written, but since the show is geared towards younger audiences, it could be intentional.  Seeing the characters tell each other about other characters instead of actually seeing the traits described felt a bit lazy to me.  It wasn’t boring as Jeanie appeared often enough to steal scenes with many hilarious antics.

It did feel a bit hollow as it went from one scene to the next as it lacked the action from the first episode and did too much telling but little showing.   There weren’t many memorable moments, and Ohm Pawat’s acting as Khet was great, but he came off as the older of the two siblings, which felt weird mainly because he is supposed to be 15. If you’re looking for a fun superficial episode to laugh at and never watch again, this is it.