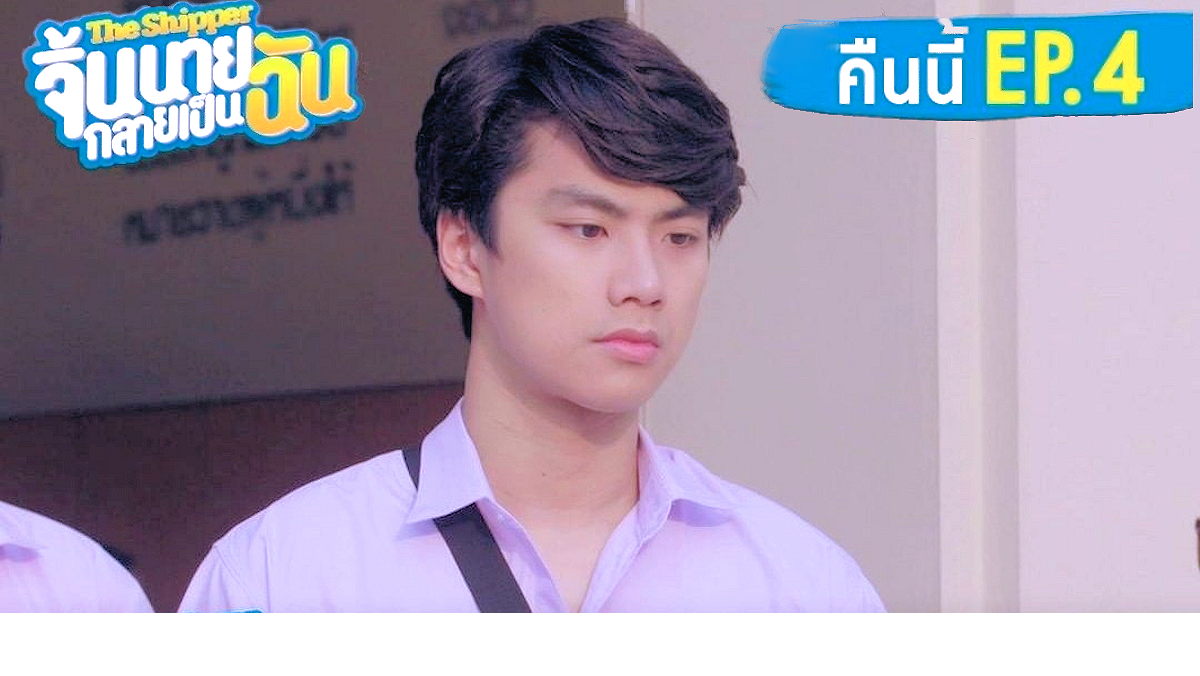 Episode 4 of “The Shipper” doesn’t have big shoes to fill as Episode 3 was a mess of perceptions of sexual and gender roles and lifestyles. While Episode 3 pushed shock value. Episode 4 takes the gauntlet of a more serious show and carries it well. Here is my review of episode 4.

Episode 4 opens with a flashback to Pan, Soda, and another girl being reprimanded by their teacher on the length of their skirts. Their teacher Miss Angkana and her “10-10-10” statement are what got KimPan to realize who Kana is. Which when you see her name should have been the tip-off, but hey, it’s Pan, so we gotta give her a minute to get to things. Flash to present day where KimPan is meeting Kana for their date. Kana appears in a Lolli dress (Lolli is an anime term for a little girl), and zany theme much to KimPan’s shock.

I don’t know why I was shocked by this, but seeing a strict teacher in a Lolli outfit made me spit my coffee everywhere. So let’s continue undaunted, shall we? Remarking with the ever-annoying “10-10-10” for KimPan being on time, the teacher seductively asks how she can reward him, while a horrified Pan asks if she is in an alternate universe. We wonder if we are as well, but it’s real. After all the teen sex mentions of the last episode, it shouldn’t be too crazy for a teacher-student relationship in this show, but the way it’s shown at this point just feels normal.

Kana babies KimPan and calls him “Bii,” which I think means Baby. When KimPan calls Kana Teacher, she turns serious, slapping her hand on the table and reminding them she doesn’t want to be called that when they’re alone. It’s super freaky how Kana acts childlike and when Kana references their secret activity. Which ends up being Karaoke, I was grateful, dear god, I was grateful. Just a moment later, the teacher strips down to a leather bodice and attempts to have sex with KimPan.

Why did they include this? Don’t worry; there is a real reason. P’Kim and Kana have never kissed or had sex, and the teacher is all ‘pent up’ over it. In all her years, she has never been kissed or had sex and wants this 16-year-old boy to be her first. It turns out P’Kim has been putting off doing anything physical with her cause of reasons. Cue a funny moment of KimPan attempting to do Karaoke with her. Soda meanwhile is visiting the body of Pan, who is still in a coma. She goes to put her flowers in a vase and sees that someone has already done it. While she adds hers to the bouquet, she notes that she hopes Phingphing gets pregnant and expelled.

At that moment, Phingphing sneezes on her coffee date with P’Way. It’s an old superstition that if someone is talking about you, you sneeze or your ears itch (Was cute thing to include.) P’Way meanwhile is texting KimPan oblivious to his girlfriend sitting next to him. This scene is one of the show’s charms because it offers one perspective (two people ignoring each other on their phones), but then Phingphing stops and says she loves him. P’Way looks at her silently but says nothing at all; then, he leans against her. He changes his text from “Boring” to “Pretty Good” and continues to lean on his girlfriend silently. The way it’s shot, the soft piano music, these things make the show worth watching.

While KimPan is still trapped in Karaoke hell with Kana, their attempt at escape causes a trip scene trope where KimPan lands on the teacher. Kana misinterprets this as it’s time to have sex finally and the epic music plays as KimPan tries to untangle himself from a very randy teacher. He shoves her away, and she overdramatically falls into a wall while wailing. KimPan has to come up with an excuse for saying no to sex. Cleverly Pan declares that because their love is wrong, they won’t go any further and words it in a way that makes it appear that P’Kim is holding himself back for her. This heroism causes the teacher to entrust him with the task of finding a stolen flash drive with the answers to an exam on it.

Now here is where things take a turn again. There IS an exam leak, and so all the teachers put their notes on flash drives. P’Kim bought Kana a flash drive for her exams, and suddenly it’s missing. (There’s something fishy about this) If it’s not found, Kana will be fired, and once KimPan agrees, she tries for another kiss, and KimPan shoves her off, and it’s ’10-10-10′ time once again (cringes at the sound…).

And again ’10-10-10′ says the teacher while KimPan and P’Way watch her dismiss more students for dress code. KimPan asks if P’Way knows who Kana is, and P’Way says no, and KimPan agrees it’s better if he doesn’t. Khet appears, and it’s revealed if he skips another class, he won’t be able to graduate to the next grade level. Khet goes to P’Way on Soda’s behalf, and P’Way says he will talk to Phingphing about it. After Khet leaves, KimPan notes P’Way already knew. P’Way admits he was aware of it and normally doesn’t care what Phingphing does (that’s your girlfriend, sir, you should care), but because Soda is Pan’s friend, he will take care of it. Because P’Kim is a hero and wouldn’t stand for it, he tells KimPan to keep being a hero, putting a hand on his shoulder, and the two share a BL Look before P’Way leaves. While Kana gives a suggestive gesture from not too far away, the moment is ruined.

While KimPan is snooping in Kana’s desk (why would it be there????), Kana tells Pongpol (gang leader from the first episode) if he fails the exam, he is out of the school, putting Pongpol at the top of the suspect list. Further implicating himself during P.E., he says that he will pass for sure. At this moment, KimPan is going through his bag and the three BULLIES bags in front of everyone. Why KimPan thought doing was OK is beyond me, but of course KimPan is caught. P’Way saves KimPan from a deserved punch for being stupid. And when Pongpol calls KimPan, his wife P’Way loses it. But by then, the teacher approaches. Naively one of the bullies says their leader has nothing to hide and empties his bag without being asked, and a knife falls out. KimPan is thanked, and the bullies are taken away.

Next up is Khet. Who, while he’s talking about an order, drops a gray flash drive that’s a cute cat paw (I want one) leading KimPan to believe the USB drive thief is him. Cue an embarrassing moment of KimPan stalking Khet all the way to a buy-sell moment that ends up being for a hair product, not exam answers. The flash drive KimPan is looking for is black….Khet demands to know what’s wrong, and KimPan turns it around on him. Just when Khet’s boss calls him to work at….a hair salon?! The reason Khet has been missing school is that he wants to be a hairdresser. KimPan learns a lot more about Khet from this encounter, which is well-acted and filmed very well. Once again, Ohm Pawat acts way older than he should for the role, which is not a positive.

Story-wise it’s nice to see how in a flashback and product placement for tea Pan and Khet met. Once again, Khet knows more about Pan than she thought, and it’s blatantly obvious he has the hots for her, but she’s oblivious to him. He calls her a dog, which is cute in how he says it, and they have a moment of looking before yelling that each other should hide somewhere else. Pongpol appears, and Pan, of course, makes the OoooWeeee face at Pongpol’s phrasing, and a new ship begins in her head (I can’t agree with her. You got the feared boys of the school right next to you, and all you can think about is will they kiss. She needs help, seriously.) Khet pays them to leave, and Khet says he can’t get his hands hurt because they have a purpose, which is cutting hair.

So who stole the flash drive? After a wonderful scene between the two brothers, we learn it was P’Kim. He hid it in the plant, throwing all of Pan’s delusions about P’Kim out the window. He is dating Kana only to use her for answers on exams. His achievements were probably ‘stolen valor,’ and her ship has sailed on without her.

My Opinion of this Episode

Stronger in writing than Episode 3 by a mile. This show concludes the game-changing aspect of the show as it pulls the superficial curtain off itself. Displaying these characters honestly, we now see them in new roles. I enjoyed the interactions of Khet with KimPan and Pan, showing more to the character. The teacher/student relationship is cringeworthy but needed to show how duplicitous P’Kim is. The reveal that P’Kim stole the flash drive was not surprising as they have been dropping hints he is not a good guy. It’s clever how they built the show around the superficial image of P’Kim and has now torn it down. Now that Pan knows the body she is in is a bad one, what will she do with this information?