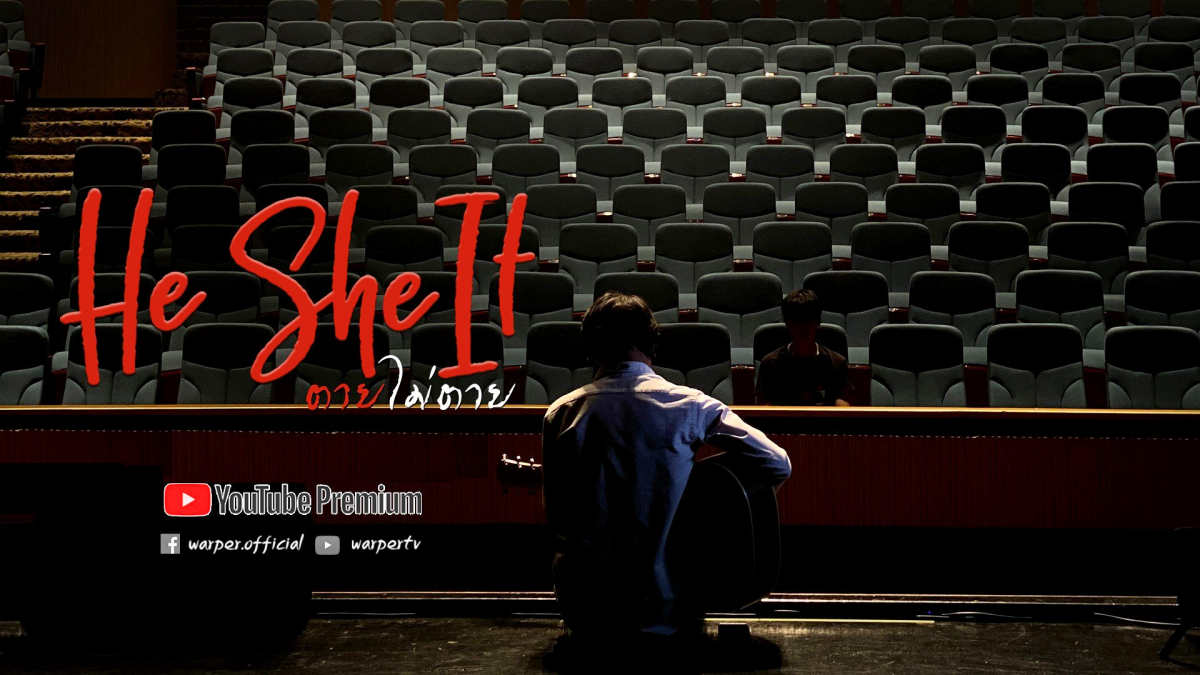 A tragic yet hauntingly beautiful love story! That’s exactly what I feel every time I listen to Mike sing with his voice cracking with emotion. HeSheIt is a rather ambitious project by Warper TV official, depicting the complexities of a relationship converging with supernatural phenomena.

Jeff Satur and Gameplay Garnphapon portray the roles of Mike and Peem throughout the series. While their sensual chemistry sets the screen on fire, what touched my heart was the raw depiction of their relationship.

The episode starts with a memory of teenage boys apparently in love and then switches to two grown-up men. I’m not sure if the teenage boys were a fragment of imagination or real. But in the present, we have both men practicing their lines while the Acting Coach praises their performance. Mike (Jeff Satur) listens to her ideas about how acting exists both on and off stage. You can never tell who is acting in real or reel. Her words resonate with Mike, who sits tensely as Peem (Gameplay Garnphapon) enters the room. The acting coach asks both of them to perform the next act, and the obvious tension is quite visible.

We yet again switch to a past memory, where Mike is swimming in the pool, and Peem enters. Mike scolds him for not responding to his messages, and Peem replies back, tersely that he didn’t want to disturb Mike and his girlfriend. You can see Peem is jealous. Mike flirts with Peem and pulls him into the water. Mike is fooling around, but he doesn’t realize that Peem doesn’t know how to swim. Finally, he realizes his mistake and pulls Peem to safety.
Mike confesses, “Whenever I’m with you, I can be myself,” and Peem promises that “I’ll never leave you again.” With that, they both share a passionate kiss, and damn they are hot!

With that, we are back to the acting session, where they are continuing the kiss. Everyone is surprised to see their passion. But then they stop suddenly, and Mike starts convulsing. The lights switch off, and when the lights are on, Peem vanishes. The friends surround Mike, who acts scared. The audiences can see scary images of Peem but not the others. The presumption is that it’s Peem’s ghost, and he is scaring the daylights out of Mike. The acting coach, she looks sadistically pleased. Go figure!

The group of friends is goofing around when Pear and Mike’s girlfriend enters. Peem is, as usual, sitting close to Mike, and she asks him to swap places. But Peem fools around and declines.
Next, they are studying late at night. Mike can’t concentrate and suggests listening to songs. It can’t be a Jeff Satur show if we don’t get to hear him crooning a romantic song. Peem rests his head on Mike’s shoulder, and before long, they are kissing. Their friend, Meen, who is sleeping in the bedroom, guesses what is going on outside.

The next morning, Meen rushes out of their apartment, and Mike is pretty confused. Meen goes straight to meet Pear, who it seems is his elder sister. He shares his doubts about Mike and Peem’s relationship, but Pear doesn’t trust him. So, Meen shows her a recording of Mike and Peem being close with each other. It seems he has been following up on this for quite a long time.

Mike is talking to his friends about his third anniversary with Pear. Later he takes her to a funfair and is pretty excited. Pear is upset and, at last, breaks up with Mike. Mike drops her home and pleads with Pear to reconsider her decision. Pear shows him the recording, and he rushes out of there.

He goes straight to Peem and accuses him of sending the video recording to Pear. Peem refuses the accusation, but Mike loses his mind. Utterly broken down, Peem asks Mike if he ever had any real feelings or was just using him for physical pleasure. In their ongoing struggle, Mike pushes Peem into the pool. Peem starts drowning, and Mike just leaves him there to drown.

“IT” is a very clever adage of the supernatural. Mike and Meen are with their friends at a mall. Mike is sitting solemnly while his friends try to console him about Peem’s death. They take him along to play at the bowling arena. That is when Meen observes movement close by and gets scared. Meen is in the basement when suddenly the lights switch off, and it feels like someone is watching him. He is appropriately spooked when his friends catch up with him and brush off his concerns.

Mike walks back to their empty apartment, and there is a moment when you see Peem’s image in the mirror. Mike feels an unknown person but doesn’t think much about it. Meen, on the other hand, is busy spreading the word about Mike and Peem’s intimacy on the acting class group chat.

The next morning Mike angrily confronts Meen and demands an explanation for ruining his life by sending the video to Pear. But Meen doesn’t back down and questions him back. He raises a question mark on Mike’s morality about being intimate with a friend while he was dating someone else. He gives the final blow by saying, “It was not me who ruined your life. It was You, yourself.”

Meen is alone at home and cooking dinner when he feels someone following him around. As he sits down to eat, Peem suddenly appears out of thin air and proceeds to choke Meen. Meen rushes back to his bedroom and locks himself in the bathroom. His roommate finds him there later, and we see Peem smiling sadistically.

Mike is his room feeling remorseful of his actions. He begins singing, and Peem’s ghost lays his head on Mike’s shoulder. As Mike sings, he chokes up and apologizes to Peem. They both start crying, and Mike finally realizes there is someone beside him. But when he turns around, Peem is gone.

The show ends on a sad but beautiful rendition by Mike in Peem’s memory, where we see a montage of their happy and sad moments.

My Opinion On This Mini Series

I had obvious issues with the main concept of this mini-series, which is “Making difficult decisions…Following the heart or following the rules”. Mike and Peem are childhood friends, and although Peem’s feelings for Mike are pretty obvious, it is not the same as Mike. He seems to be two-timing both his girlfriend Pear and Peem. The first episode sets the premise for the same, where we get a glimpse of their relationship both in ‘real-time’ when they are together and in ‘reel time’ when they are in their acting classes. Mike can’t seem to give up on Peem and expects him to be his dirty secret all his life. I truly feel bad for Peem, whose emotions are being toyed with.

The second Chapter, “She,” focuses on Meen. No, he isn’t the main character, but more like a villain for Mike and Peem. Although his intentions are still unclear, he certainly plays an important role in moving the story forward. Whether he recorded Mike cheating on Pear intentionally to help his sister or because he hated Mike for being a two-timer is not known.
But he clearly has a bone to pick with both of them. What really upset me was the way Mike dealt with the situation. Instead of immediately jumping to conclusions and accusing Peem, he should have considered the situation carefully. Yes, he was enraged, but Peem was never at fault. His only downfall was falling in love with a guy who is being duplicitous about his relationships. Peem paid with his life for the mistake. I don’t think I can ever forgive Mike for his decision not to help Peem. That was inhumane and unforgivable.

The finale episode “IT” left me with mixed feelings and discontent. Clearly, it was focused on the supernatural, and as such, Peem’s revenge took precedence. But shouldn’t he be focusing on Mike instead? The guy kept using him and discarded him like garbage. Instead, we have Peem spooking the daylights out of Meen and crying on Mike’s shoulder. Does Love make you that stupid, that you fail to see the other person’s shortcomings? I’m not condoning what Meen did, but Mike was equally responsible. The character left me with a bitter taste. It would have been better if Mike had admitted their relationship with Peem and shown him the respect that Peem deserved. No amount of remorse is going to make up for his loss, and I don’t feel sorry for him.
Moving onto the main actors, Jeff Satur, as usual, was awesome. While he plays a die-hard romantic in “Ingredients” who obviously adores his roommate Tops, in “HeSheIt,” he flipped the tables to play an unfaithful lout. Gameplay, as usual, impresses with his seasoned performance of Peem. From being head over heels in love with Mike to being outright scary like a ghost, his expressions are perfect. The surprise package is Runn Tiyakorn, who plays Meen. Meen might not be an outright person, but I really enjoyed watching him dress down Mike in the finale episode. That being said, this mini-series is certainly for those who are bored of watching the romantic BL series and want to explore the thriller genre. It will leave you confused in certain instances but watch it for the lead actors who never fail to impress with their mindblowing chemistry and soulful music.