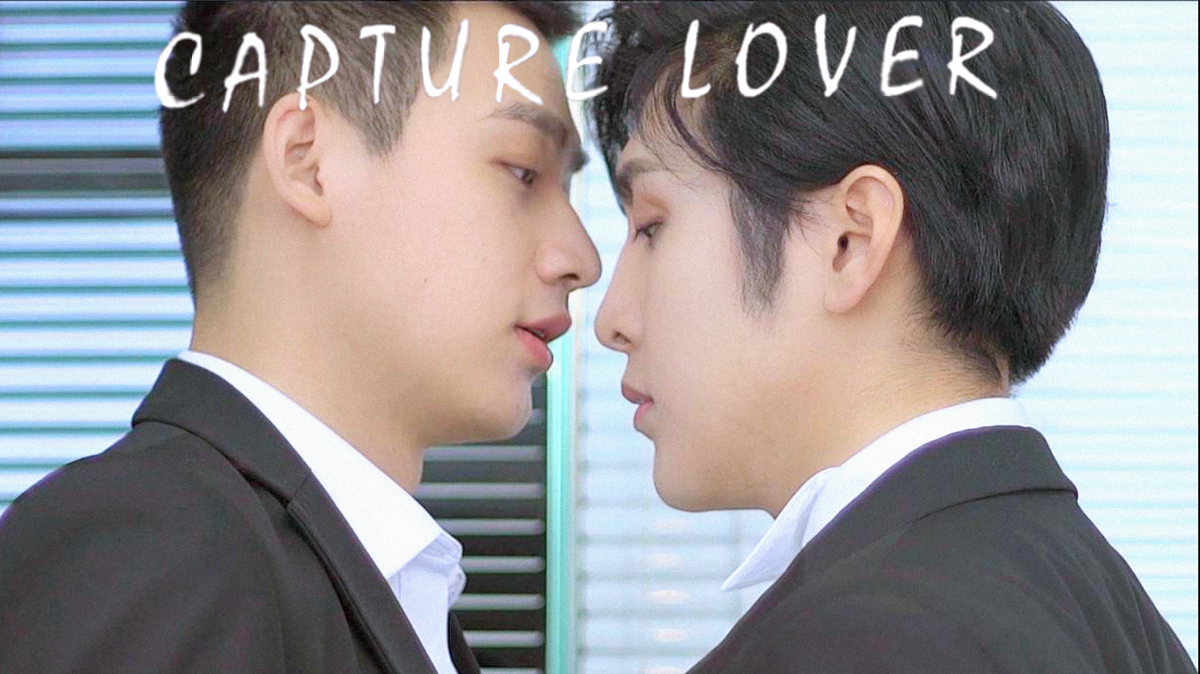 Capture Lover, despite being slow-paced in the initial episodes, is picking up speed. The old adage of “Opposites Attract” comes into play as Ying Jiaming’s mischievous demeanor suddenly turns flirtatious. Ding Junjie is left flustered at times and overwhelmed at others. Certain scenes might seem lacking, but the chemistry between the main leads shines through, and you can’t help adore them.

The first three episodes set the premise where Ding Junjie, Deputy Manager of the Marketing Department, is at odds with his company’s new recruit, Ying Jiaming. The tables turn when Ying Jiaming is elevated to the position of the Manager. Thus begins a tug of war, which turns into a major clash of egos. When Jiaming’s ex-girlfriend starts stalking him, he is left with no choice but to beg Junjie for help.

Ding Junjie enters Jiaming’s office angrily and confronts him about making him work overtime intentionally. Jiaming agrees and is quite flamboyant about it. Junjie can’t stand his attitude anymore and threatens to resign. As he walks out, a scared Jiaming pulls him closer, and they have a charged moment. But Junjie pushes him away. Jiaming promises to make it up to him with a promise to approve Junjie’s project and paid holidays. Junjie seems pleased and accepts the offer.

Later Meng Yue asks Junjie if he really loves Jiaming. Jiaming refuses and tells him about Jiaming’s offer. Meng Yue asks Junjie how he can trust Jiaming. It’s hilarious when Junjie does a spit take and realizes that Jiaming is indeed not trustworthy. Jiaming enters right at that moment and threatens Meng Yue with overtime. He cautiously inquires about their relationship, and Junjie replies that they are best friends. Jiaming is appeased and invites him to dinner.
Jiaming and Junjie have an honest conversation where Jiaming accepts his mistakes and apologizes. He thanks him for helping get rid of his girlfriend. Jiaming explains that he never liked Lucy Zhang, and his father forced him to date her. He talks to Junjie about his dreams of becoming a chef and opening his own restaurant. Junjie sees a completely different side of Jiaming and realizes that he had been wrong about Jiaming all this time.

Ding Junjie enters his office and finds a drink on his table. He is suffering from a sore throat, and Jiaming’s specially made it for him.

Manager Lang has arranged a meeting to finalize the new ideas for their company. Both Ding Junjie and his colleague Xiao Liu suggest ideas. Lang likes both ideas, but only one idea can be chosen. She asks for Jiaming’s decision that seems too besotted with Junjie. He spends an inordinate amount of time staring at Junjie and throws his support behind Junjie’s idea. Obviously, Xiao Luo disagrees because of the market risk. However, in the end, Jiaming dismisses their arguments, and finally, Junjie’s idea is accepted.

Later Junjie asks Jiaming why he supported him. At first, Jiaming brushes it off as his attempt to bring losses to the company so that his father would fire him. But later, he accepts that he believes in Junjie’s ideas, and the company can’t develop in the future if they don’t take market risks.

But it seems that Junjie’s ideas indeed bring good results and the company gains profits. To celebrate this occasion, Jiaming takes the entire marketing team to dinner. The fangirls begin gossiping about Jiaming and Junjie’s relationship and request them to sing karaoke together. Junjie doesn’t agree at first, but then he joins Jiaming. They are both very drunk and end up hugging each other. A montage of their sweet and bitter moments follows. Seeing Junjie and Jiaming so close to each other, Meng Yue seems to be rather uncomfortable.

The next morning, Jiaming wakes up Junjie with a call and invites him for a day out. Junjie refuses and mocks him about going on a date with Meng Yao. Suddenly Junjie wakes up in shock as he remembers their late-night conversation where they promised always to support each other. He can’t believe that he said those words to Jiaming in his drunken state.
Junjie meets Meng Yao at a park for a date. What’s hilarious is that both Jiaming and Meng Yue are stalking them. They both decide to tag along as they stalk Junjie on his date with Meng Yao. Junjie and Meng Yao next move to a restaurant where Jiaming and Meng Yue hide behind books as they watch Meng Yao act cute with Junjie. Meng Yue gets frustrated and confronts them. He accuses them of leaving him behind, and Meng Yao claims that she is dating Junjie. Meng Yue gets even angrier and stomps out of the restaurant.

Jiaming can’t stand it anymore and sits right beside Junjie. At first, Junjie acts irritated, but he is pleased to realize that Jiaming is stalking him. To make him confess, Junjie keeps on instigating him. Meng Yao gets frustrated seeing them act lovey-dovey and leaves in a huff. They start bickering again, and finally, Jiaming blurts out, “Because I like You.”

At night both are lost in thoughts. Jiaming seems lonely in his apartment while Junjie smiles, thinking of Jiaming’s confession. Junjie suddenly takes an absence of leave from the office for a few days. Jiaming threatens Meng Yue about kissing him in public. Meng Yue confesses that Junjie took a sick leave day to avoid Jiaming. He gets Junjie’s information and turns up at his home for dinner. Junjie’s Mother is especially happy to see his new colleague and invites him to dinner. Junjie is still faking sickness when Jiaming enters his room. But Jiaming deduces that Junjie just feels uncomfortable about his confession. Junjie shuts his mouth and asks him not to talk about it. Junjie’s Mother calls them for dinner, and Jiaming gets emotional as she feeds him the same dumplings that Jiaming’s mother used to make.

The storyline is heavily leaning on the jealousy troupe now. But the fact remains that finally, our main leads are beginning to accept their attraction to each other. Jiaming never does anything halfway. He seemed to be a reckless and irresponsible character in the initial episodes. But the current episodes give us a better understanding of his upbringing and issues with his overbearing father. He might be the Company heir, but he wishes to live a simple life. He can’t stand the thought of living a boring life being stuck at his father’s office. Also, being forced to date a girl of his father’s choice really doesn’t help the situation. I guess that’s why he finds Junjie intriguing. I guess it’s the first time in his life that he has met someone who opposes him so strongly.

Junjie, on the other hand, seems to be developing feelings for Jiaming. But he is either shy or doesn’t trust Jiaming’s intentions entirely. Given Jiaming’s mischievous nature, that’s quite believable. But there are instances when he looks at Jiaming like he hung the moon and make no mistake, but he certainly growing closer to this notorious brat.
Han Jing Cheng, as Ying Jiaming showed major improvement. From playing the spoiled rich kid to suddenly being observant seasoned Manager, the change was instantaneous. Jing Cheng lived up to the challenge. Luigi Zhang might be a newcomer, but coupled with his handsome looks, he makes Ding Junjie come alive. You can’t help but swoon when he stares longingly at Jiaming and wish they would become a couple sooner.

I’m looking forward to watching the finale episodes, to see how Junjie finally accepts his feelings and their relationship progresses.