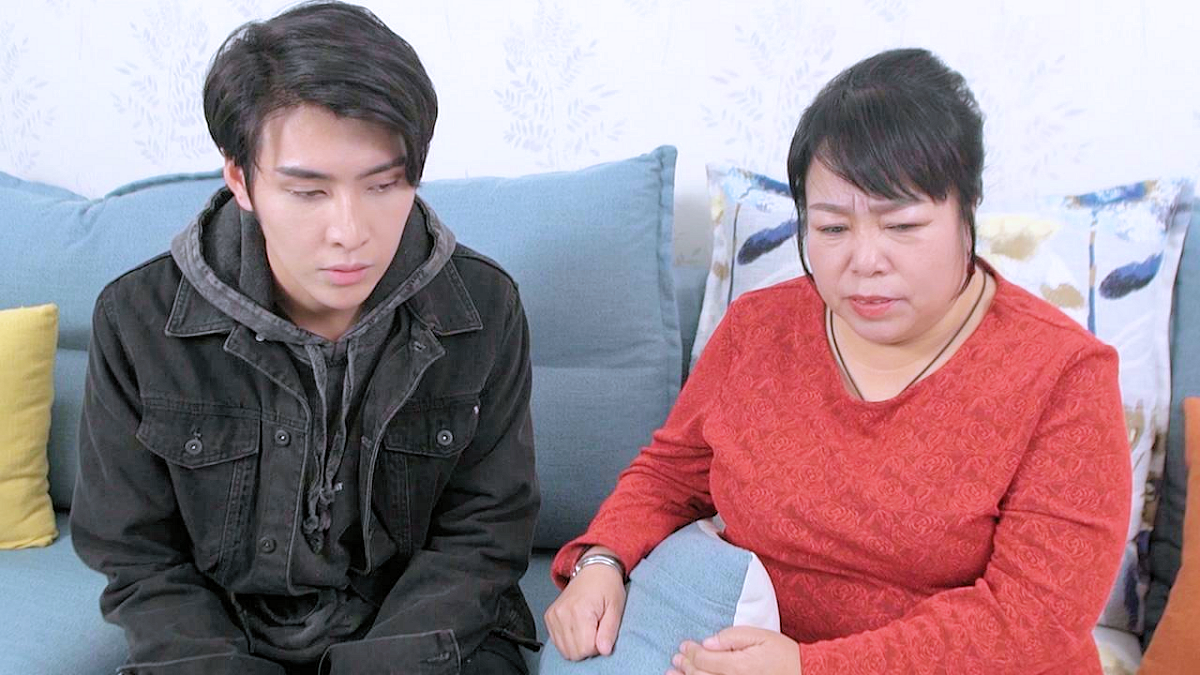 The Finale Episodes of the Chinese BL drama Capture Lover left a lot to be desired. Although the main leads got a convoluted “Happy Ending,” the penultimate episodes seemed rushed and haphazard. I’m least disappointed to say, but the actors’ have chemistry in spades, and that’s what keeps you hooked to this show, that was banned on the local shores for depicting same-sex relationships.

Jiaming is having dinner with Junjie and his mother when he discloses that it’s his birthday. Looking at his sad face, Mom immediately orders Junjie to buy more alcohol so they could celebrate. Mom and Jiaming get rip-roaring drunk while Junjie has no idea on how to control both of them. Jiaming gets quite emotional when he says that Junjie’s mom reminds him of his own mother. Mom promptly declares that from now, Jiaming is her son as well. Finally, Junjie has enough of the melodrama and drags his mother to her room. She orders him to let Jiaming sleep in his room.

Junjie next drags Jiaming to his room and takes off his shirt. He makes Jiaming lie down on his bed and sleeps beside him. But obviously, our drunken hero has other ideas and wants Junjie to remove his clothes as well. They have a struggle, and Junjie pushes him off. Jiaming impulsively kisses him, and Junjie is stunned. With that, Jiaming bares his heart, “I have wanted to kiss you forever. It’s like I’m possessed. I even dream about you. I actually care about you. I like your confidence and unyielding spirit.”

He further confesses that not seeing Junjie at work puts him in a bad mood. He only wants to look at Junjie and kiss him. Jiaming accepts that he wanted to ask Junjie why he has been avoiding him lately, but looking at him now, Junjie’s heart is softened.
Meng Yao returns to her apartment and is shocked to find it thrashed. She immediately calls Junjie, and the best part is seeing them cuddled together. Junjie promises that he will be at her home and Jiaming tags along because he doesn’t want Junjie to go out so late.
Meng Yao has calmed down by the time they arrive, but she insists on Junjie staying with her. That ruffles Jiaming’s feathers, and he protests. Junjie orders him to go back to his home, and although it seems like Jiaming wants to argue, he reluctantly agrees. After he leaves, Meng Yao cuts to the chase and confronts Junjie about having feelings for Jiaming. Junjie is unsure, but Meng Yao correctly guesses that he is just dishonest to himself. She is completely accepting of their relationship and decides that from now, she will stop pursuing Junjie. She is happy for her friend, who has finally found someone to love.
The next day, Jiaming begs Junjie to go on a date with him. Manager Lam finds them being close to each other and rushes out of the cabin.

For their date, Junjie meets Jiaming at a riverbank. Jiaming explains that this place is his safe haven. Whenever his parents used to argue, he would come here to find some peace of mind. Jiaming confesses that he wants to share everything in his life with Junjie and spent the rest of their life together. Junjie is suitably surprised and overwhelmed.

As they walk home, Jiaming asks Junjie what he feels. Junjie accepts that he is still confused. But Jiaming points that he isn’t confused and that Junjie’s feelings are clearly visible. Junjie admits he is wary of the consequences, especially for his mom. Jiaming decides they can pretend in front of her unless she accepts them.

As Junjie walks back home, he is kidnapped by two strangers. Jiaming is at his office thinking about Junjie when his mother worriedly calls him. She informs him that Junjie is missing, and right at that moment, Jiaming gets a message from Zhang Lucy. The vamp has kidnapped Junjie, who tries hard to make her understand that Jiaming doesn’t love her. Jiaming rushes to the spot and, in order to placate Lucy, accepts that he doesn’t love Junjie. But she has her lackeys beat up Jiaming because apparently she hates him and is out for revenge. Luckily, the police arrive on time, and Lucy is arrested.

Junjie wakes up in his bed to find an unconscious Jiaming beside him. He gets alarmed, but his mother tries to comfort him. He cries and begs Jiaming to wake up, who finally becomes conscious. Jiaming seems tired, but despite that, he consoles a frantic Junjie and asks him to rest as well.

The next day they are back to bickering like cats and dogs. Junjie’s mom actually supports Jiaming and scolds Junjie for not helping out an injured guy.

At night, they are again together in the same bed, and Jiaming decides to take advantage of the situation. He tries to get closer to Junjie and gets him all flustered. At first, Junjie protests too much, but when Jiaming reminds him about the way he cried yesterday, Junjie finally admits his feelings.
The next scene shifts to them having a heartfelt conversation. Not that Jiaming is interested in talking. But Junjie wants to know how he fell in love with him. Just at that moment, Meng Yue calls Junjie. Jiaming gets irritated and tells at Meng Yue. Junjie scolds him about being impolite to his best friend. He further accuses Jiaming of doing the same thing to him or his mother. Jiaming is taken aback and promises that he will never be impolite to Junjie’s mother.

With that, Junjie finally confesses that he trusts Jiaming. With Jiaming by his side, his life is finally complete. Finally, they spent the night together.

Junjie comes back home to find his mother in a dejected mood. It seems that Jiaming’s father contacted her and told her the truth behind their relationship. She recklessly bashes Junjie and orders him to stay away from Jiaming. At first, Junjie refuses and tries to reason with her. But suddenly her condition worsens, and he has no choice but to accept her decision. At night, she catches Junjie texting Jiaming and again confronts him.

The next day, Junjie meets up with Jiaming. It almost kills him when he breaks up with Jiaming. Jiaming tries hard to change his mind, and you feel sympathy for the guy. Junjie returns home and comforts his mother. He also switches jobs, and we see both of our main leads lost in their thoughts as a montage of their happy moments plays.

Sometime later (I’m not sure if it’s months later or years), Junjie is sitting outside a cafe. When someone walks by and stands beside him, yes, it’s Jiaming, and we finally get to see what happened on the day they broke up. Watching Jiaming walk by dejectedly, Junjie calls out, “Ying Jiaming, you wanted freedom. You said that you wanted romance and wanted to set up a BBQ stand. Let’s not set up a location. But if we ever bump into each other, I’ll bravely take your hand” With that, we return to the present, where Junjie seems grateful that they have finally met again. The show ends with both of them smiling widely.

The finale draws to a conclusion, certain major issues like parental disagreements which are currently a major issue not only in China but worldwide. It was disheartening to see Junjie’s affable mother turn into a villain and separate the two lovebirds. But the show would have been disheartening if they never met again. I’m glad that Ding Junjie made that promise. Maybe he was thinking of it like a cool-off period, where he might be able to soften the edges and get his mother to finally accept his relationship with Jiaming. Although she isn’t exactly averse to Junjie being with Jiaming, her fear about societal rebuke is certainly viable. How they will tackle both these issues would have made an interesting watch!

What impressed me the most about Capture Lover was the easy camaraderie and chemistry between the main leads Han Jing Cheng and Luigi Zhang. I must appreciate Jing Cheng’s acting talents. In the initial episodes, he seemed a little lackluster. But he improved in the later episodes. In the scene where Jiaming confesses his feelings to Junjie, you can see the honesty reflected on his face, and you can’t help but admire Jiaming. He has a sensual presence and can hold your rapt attention.

Luigi Zhang, on the other hand, plays his part perfectly. But I felt his discomfort in their lovemaking scenes. He seemed expressionless, and that made the scene entirely abysmal. I wish they had avoided the close camera angles and just focused on their kissing scenes instead. It just put a whole big question mark on their relationship. Overall, Capture Lover wasn’t anything extraordinary. But the cinematography is commendable, and the Director did try his best with the limited sources available at hand. I think you should definitely watch this show for the handsome leads and their believable chemistry!