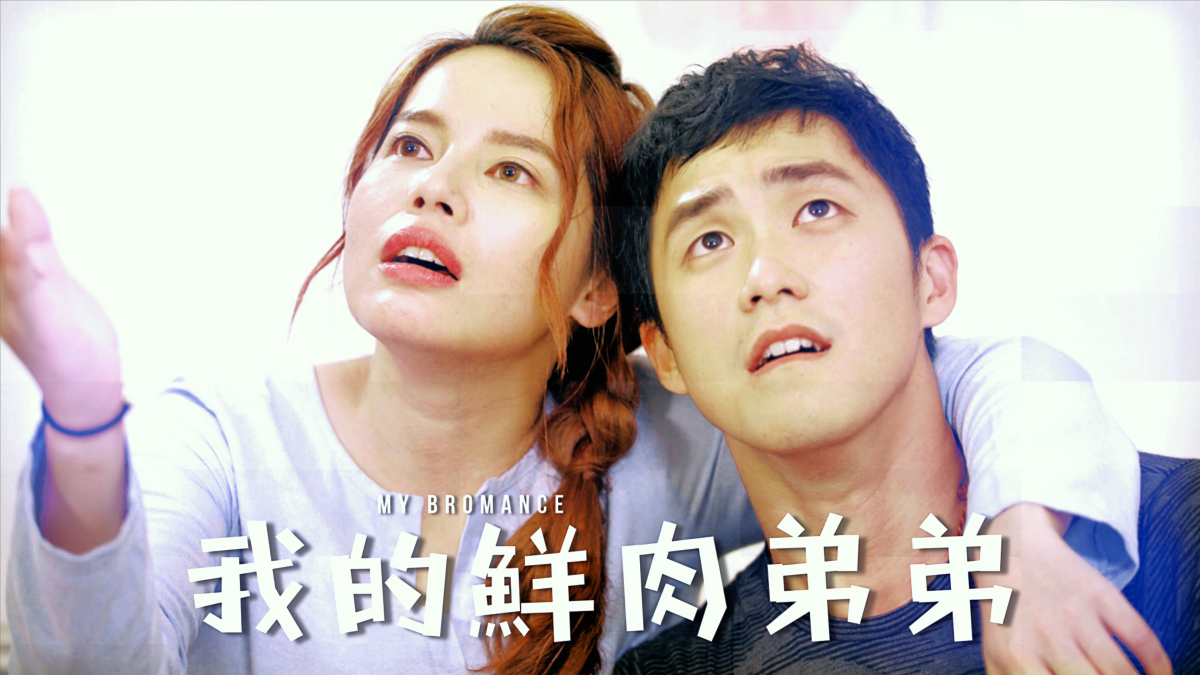 My Bromance 我的鮮肉弟弟 Review (Ep.1 to 4)

My Bromance is a light-hearted Taiwanese BL mini-series featuring main leads Amy Lai and Hao Ran Lai’s hilarious attempts to hide their secrets from their meddling, nosy, and homophobic mother. The show premiered on EBC Network’s YouTube channel on April 11th, 2020, and is fast approaching the 1M viewership ratings. The mini-series focuses on the relationship between Kary and her children, Amy and Hao Ran. Whether she accepts them and their life decisions are yet to be seen.

Hao Ran Lai, portrayed by Hao Ran, is a gay man hiding deep inside the closet. He is in love with his roommate Nick, but they split apart as roommates. Later he moves to live with his elder sister Amy Lai, where he meets a new love interest.

Amy Lai plays the character role of the elder sister. She is rambunctious and over the top, just like her mother. Unfortunately, she loses her job, and that’s exactly when her mother turns up to stay with them.

Heaven Hai portrays Kary. She is suffering from a mid-life crisis; she decides to divorce her husband and moves in with her children. She is flirtatious, quite loud, and also homophobic. The core of this storyline is how the mother wreaks havoc on her children’s lives by overruling their decisions.

Nick Hsieh plays the role of Nick, Hao Ran’s roommate as well as his ex-boyfriend. He doesn’t take their relationship seriously and only thinks of Hao Ran as a fuck buddy. They eventually break up.

A young woman’s life suddenly becomes extremely troublesome. First, she gets fired by her evil boss; her roommate is a care-free (but smart) Internet personality, and her brother crashes at her place after being dumped by his boyfriend. To top it all off, her mother announces that she’s getting a divorce and moves in with all of them. The hot guy who keeps buying her coffee at the coffee shop is suddenly the least of her worries. Even more trouble starts brewing on the horizon when her roommate’s best friend comes by. It turns out he’s hopelessly in love with her brother Ran Lai.

We have this hilarious over the top introduction by Amy, where she describes herself as a workaholic and is awaiting the news of her promotion. When her boss calls her in his office, she doesn’t let him speak and fires off her “Thank You” message. The boss reluctantly conveys the decision that she has been fired.

Thus begins her search for a new job where each time she is either met with rejection or riddled with ridiculous appraisals. She finally gives and sits dejectedly at her apartment. Her roommate, Erica who is a popular internet personality tries to cheer her up and posts a video online asking her subscribers to help find jobs for her best friend.

Finally the hard works pays and Amy gets an opportunity to act as a Hotel Concierge. As she walks inside the hotel lobby, she bumps into intensely handsome man. He helped her pick up her room key and walks off. As she saunters to her hotel room to get done to reviewing the amenities, Amy is stunned to find her room occupied. As she enters the room, she is shocked to find two men in a compromising situation and screams.

We finally learn that one of the guys was the handsome man, Nick whom Amy bumped into earlier. The other guy to Amy’s shock is her younger brother Hao Ran.
They sit down to have a conversation where Amy questions him about liking men. He accepts that he is gay and makes her promise to keep this a secret from their conservative parents. He then turns the tables and asks why Amy isn’t at her office. She reluctantly accepts about being fired from her old job and makes him swear that he won’t tell their mother about this.

Hao Ran is working out at the gym with his trainer but his entire attention seems focused on his boyfriend Nick. Nick seems to be a flirtatious character and is seen playing along with another trainee. Hao Ran confronts him angrily and Nick brushes off his concerns saying that they were never in a relationship. Hao Ran breaks up with Nick and moves out of their apartment. He moves in with Amy who at first consoles him and later wants to know everything about their ‘sexescapades’ at the hotel. Damn this girl is an authentic fujoshi!

Just then their mother calls and informs them that she is coming to visit Amy. Both are suitably alarmed and freak out thinking about the consequences of her arrival. Amy is worried that if she finds out about Amy being jobless, their mother might force her to marry old Uncle Lee. Hao Ran on the other hand is tensed about her finding out that he is gay. Both decide that they will work together and pack off their mother within two days.

Erica finds a stranger (Hao Ran) in their shower next morning and screams. Later she calms down after learning that he is Amy’s brother but is tad disappointed that he is gay. In her true blue fujoshi style, she proposes arranging a blind date with her best friend, who according to her would be an ideal choice for Hao Ran. Hao Ran rushes out giving excuses yet Erica texts her best friend. The best friend turns out to be Hao Ran’s Gym instructor Wyatt. She threatens to reveal his bad pictures, if he doesn’t turn up at her apartment tonight and Wyatt agrees.

Wyatt chances upon a strange woman who is having troubles with her phone’s GPS. She unsuccessfully tries to flirt with him but he fends her off by pointing her in the right directions. The strange woman next turns up at Amy’s apartment. Erica thinks she is a salesgirl and shoos her off. It’s so damn funny but the woman keeps ringing the doorbell. Ultimately the stranger reveals the fact that she is Amy’s elder sister Kary.Erica wonders why Amy has never talked about her. But Kary barges inside and makes herself at home.

She ruffles through the things in Amy’s room and finds men’s underwear. She delightedly asks Erica if Amy is in a relationship. Erica actually has a doubt that she is behaving like Amy’s mother. Just then Amy enters and it is confirmed that Kary is indeed their mother. Amy admits that Hao Ran is staying with her.

Later she joins the girls in the kitchen and shows some photographs. It seems like she is trying to set up Hao Ran on a blind date with one of the girls. Amy gets alarmed and tries to brush off her concerns saying that Hao Ran is still “little”. Kary does hilarious take on Amy’s “little” and says that Hao Ran is all “grown up” now. She then describes one of the girl’s families as being filthy rich and that they own 5 buildings in Taipei. Hearing that, Amy instantly agrees that the girl is a good choice. I can’t believe that she just changed teams like that. Like mother, like daughter!

Hao Ran returns home and they have a full blown arguement where Kary tries to emotionally blackmail him into dating the rich girl. Amy has a hard time playing peacemaker while Hao Ran upfront rebukes his mother’s attempts to sell him off to the highest bidder.
When their argument gets out of hand, Amy drags Hao Ran out of their apartment with the excuse of grocery shopping.

Kary hears the knock on the door and opens it to find the handsome stranger from the morning. Wyatt as usual ignores her abysmal attempts at flirting and walks inside to meet best friend, Erica. Kary however doesn’t give up and interrogates him about his preferences. She keeps on trying to flirt with him and Erica can’t stand it anymore. She joins the conversation and asks Wyatt to make things clear to Kary. Wyatt confesses that he is gay and likes guys.

I almost feel sorry for the guy as Kary bombards him with questions and tries to seduce him even further. It’s so embarrassing, yet you can’t help laughing. Erica reveals that Wyatt tried dating girls and it didn’t work out for him. Kary finally deflates and seems to have given up for the moment.

Amy and Hao Ran walk home and he is worried that their mother might find out about his secret. Amy is worried about what will happen when Kary finds out about her being jobless. She consoles Hao Ran and promises that she will call their Dad to ask for help.

Kary over exercises and pulls a muscle in her leg. Wyatt picks her up and after lying her down on the sofa, massages her ankle. That is exactly when Amy and Hao Ran enter. Hao Ran is surprised to see his trainer at their home and Erica tries to set them up. Amy is worried about their mother and asks her to be conscious. She advises Kary not to exercise and take rest. Kary is affronted as she reveals that she has signed a three month subscription at Wyatt’s gym. Both the brother and sister freak out on learning that their mother is planning to stay with them for three months.

Hilarious and out of the box! It’s nothing complicated yet it deals with the major issue that most teenagers face when they want to walk out of the closet and face their parental units. Hao Ran and Kary are the perfect example of how much struggle, each individual faces when they are unable to reveal the truth behind their identity. The fear of being unacceptable to their parents drives most teenagers into their inner shell which often leads to depression or anxiety. Katy is defined by her homophobic behavior and conservative nature.
In contrast, Amy’s character is more amiable because she not only accepts her brother’s sexuality but also stands beside him. How many teenagers actually get this sort of support when they are struggling with identity crisis? Frankly, not many because societal norms and prejudices still rule our society.

I’m not saying this show is giving out life lessons.Nope, My Bromance is rather a light hearted banter between the ridiculous characters who make you laugh with their over the top acting and leave you with happy moments. From the supportive ladies in the show like Amy and Erica to the overbearing mother Kary, each character has a particular troupe which is essential to moving the storyline forward. You sympathize with Hao Ran when he feels helpless faced with his mother’s matchmaking attempts. I have just started watching this show, so I’m obviously interested in learning how the brother-sister duo will tackle their homophobic mother, will Wyatt confess his feelings to Hao Ran and what will be Hao Ran’s decision after all. Keep watching this space for further updates on this romcom delight!