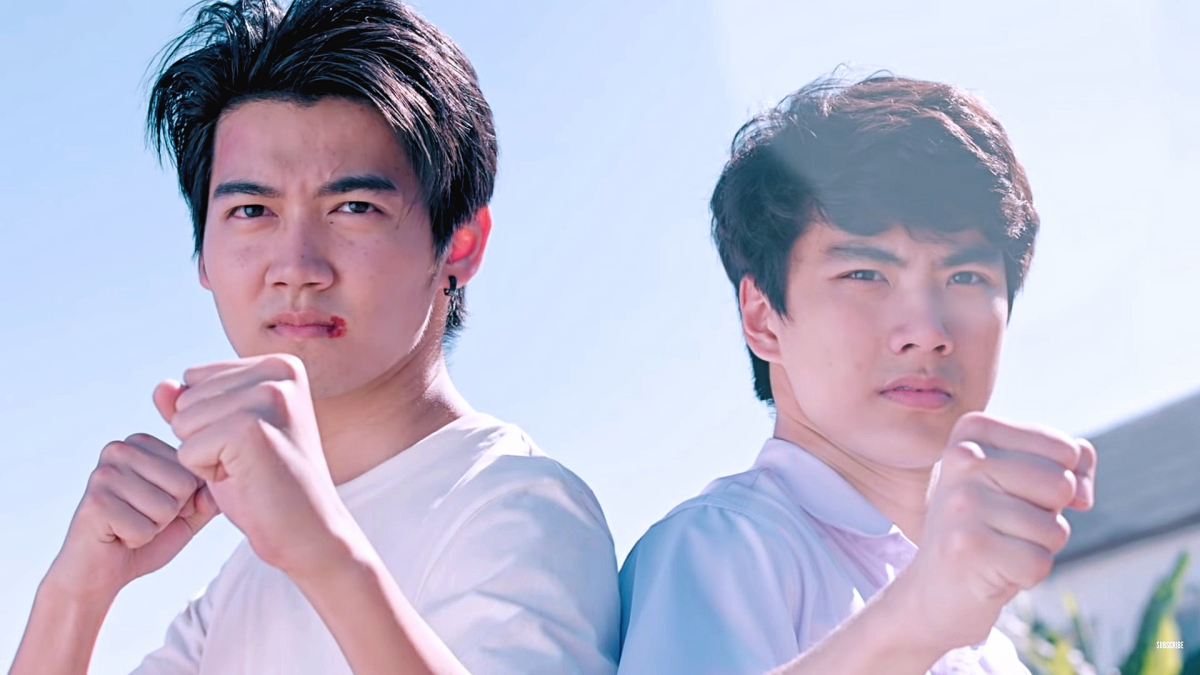 Pan’s back in her body. P’Kim’s body is in a coma. Why? How? What? With P’Way set to act on his feelings for P’Kim, finally, what will this mean? Khet should already know everything by now, but does he? Phingphing isn’t one to take a break up well; what will she do? Find out. Right now!

They are beginning right where the last episode ended. Pan looks at a confused Soda and is equally confused. Before they can figure it out, a nurse comes to sponge bath Pan but see’s P’Kim and runs for a doctor. With an array of poorly chosen sound effects, the clueless pair try to figure out how the body-switching theory works and what it means that Pan was in P’Kim’s body. Neither seems at all interested in the boy’s well being, which is just how these two are.

Instead of seeing how that plays out, we are shown the school is a buzz about P’Way cornering KimPan and having his leg up suggestively. Everyone is in support of this, including the two goons for Phingphing, who are spreading it like wildfire across social media. The two find her in that same bathroom that, by this point, we can determine, is their clubhouse. She is, of course, furious and decides to use P’Off to make P’Kim pay.

Back at the hospital, a concerned P’Way is by a sleeping P’Kim while a doctor examines the now comatose boy. I wonder how he knew to be here, but we are going to toss that up to lazy writing as Khet is watching from the foot of the bed looking a lot less concerned for his brother’s wellbeing, which P’Way notes before Khet rushes off to see Pan. Pan has a serious talk with her uncle, who is actually her stepdad. At this moment, we get to see more of their relationship and why she won’t refer to him as Father.

After he sees her hospital bills and goes off to start a payment plan, soda appears, and once again, the two show how self-involved they are in how they react to the situation. Khet appears and catches them in an obvious lie, and the two both feign headaches. Any concept of Pan having grown in maturity by being P’Kim is dashed as I watch her lie her way into more suspicion and take things either at face value or utter indifference. This behavior would be fine if, by this point, she hadn’t shown actual signs of personal growth, I was disappointed with the writing, but it’s what I’ve come to expect at this point.

The two girls fake every illness you can think of before Pan plays insanity to get Khet to leave. As the girls leave with Pan’s uncle, they see Khet talking to his mother and feel justifiably bad. The pair decide to summon the Angel of Death at Soda’s home. Pan naively surmises that the Angel Of Death appears where there is wind, so the pair try different blow dryers to summon her. Calling out to a Goddess who has appeared whenever Pan talks in the past is just too obvious of an answer. (thoughtful logic need not apply here to these girls)

While those two decide since she didn’t show due to them not calling for her means everything is fine (facepalm). Phingphing meets with P’Off and his two goons in an abandoned building. Now, this scene is well acted by all concerned, but I question why the goons who were expelled are wearing their school uniforms months after being expelled. Or why three high school girls are wandering around at night in theirs (Wardrobe choice malfunction).  P’Off agrees to help with P’Kim and instructs Phingphing to keep P’Way busy.

At the same time, P’Way is still sitting by P’Kim with Khet looking on. The two have a friendlier than usual exchange, and it’s nice to see not only them getting along but two characters who actually make sense. I’ve thought this the entire show and am going to say it. I feel like the writers are writing P’Way and Khet’s script leagues better than Pan. I don’t know if it’s intentional, but at times it undercuts the shows overall watchability as I have to sit through the nonsense to get to an actual logical plot.

The next day Pan returns to class, and Khet outsmarts her evasion, and the two have a conversation after Pan once again tries the headache trick she faked the day before. She cycles through every trick as Khet states P’Kim did the same. Finally, they wind up in the infirmary where he states P’Kim never woke up. Meanwhile, Phingphing visits P’Way and, after a while, gets caught because she was texting P’Off the whole time. P’Way leaves truly done with her and to protect P’Kim, who is now in serious danger.

P’Off and his goons appear at the hospital and are caught by P’Way.  They go to fight, and P’Off pulls a knife on a P’Way.  Now to suspend disbelief as Phingphing appears before P’Way just as P’Off was about to get started. She tries to stop it, and P’Off shows he doesn’t care what she says. Phingphing runs off to get help while the goons fight P’Way. She finds Pan who is looking after Khet and tells her she needs P’Kim to help P’Way, and I’m wondering why she didn’t call the police?

Pan decides to become P’Kim again while a bloody P’Way fights for his life! The action is amazing, all involved do a fantastic fight scene, and Photcharaphon Thepsukdi’s P’Off is a very convincing sadistic teen. Pan argues with Khet and finally tells the truth. Khet points out the flaws in her logic before going to help fight with P’Way, and it ends with the two ready to take on P’Off and his goons. I seriously wonder how Phingphing and Khet knew how to find P’Way…

My word there was a lot of suspended disbelief and lazy writing to make this episode work.  Anyone this far into this show knows that this style of writing is as good as its gonna get at this point. What makes the show worth watching is the actors, and the individual scenes that don’t rely on “How did the character know exactly where to be?” Or “How did this character get told LITERALLY EVERYTHING but still not know about the body-switching? And this episode delivers on that.

Ohm and Fluke share the MVP slot for best actors for this ep. Given huge chunks of screen time and range to play with their characters growing friendship, they shined. Phingphing playing the conflicted ex was pretty well done as well. Dumbing down Pan seems like a mistake because, as a viewer, I was growing to like her, and now she is back down to being the worst part of the episode (again). It’s asking a lot from a viewer to sit through her nonsensical reasoning to get to the actual meat of the story and better writing, which is every other character on the show.

Well paced. Emotional. And seeing other characters grow was enjoyable and memorable. Photcharaphon Thepsukdi, who plays P’Off is stealing scenes as the villain of the show, and I enjoy watching his single-minded revenge plot. So as long as you’re in it for a fun romp with substance only by all the side characters. It’s worth watching