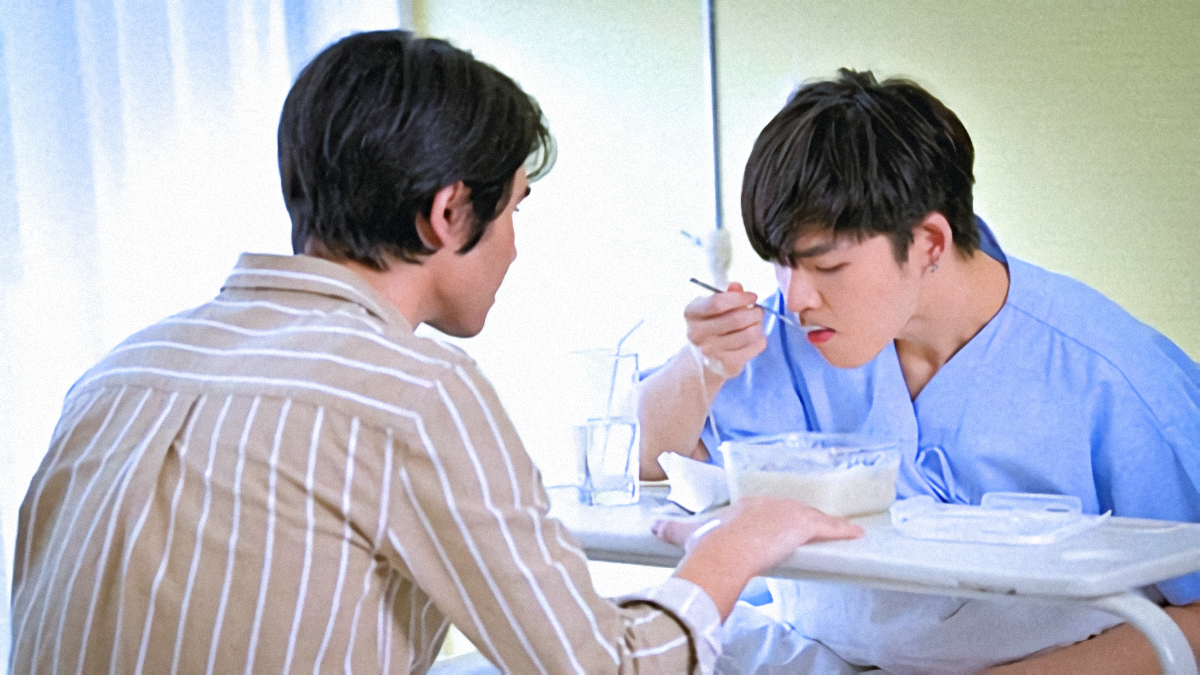 “Caring” is a two-way street. If only one party keeps receiving and doesn’t give back, then the relationship would surely get weary sooner than later. Marwin has always been on the receiving end of the care extended by Tops. So, what happens when the tables turn and Tops is the one in need of TLC? Will Marwin live up to the challenge? Episodes 7 and 8 highlighted a different side of Tops and Marwin’s relationship, which was invariably pleasant and a total surprise to Mike, Marwin’s friend. Let’s review and enjoy the adorable moments sprinkled with a gourmet flair!

Marwin is rehearsing when he notices that Tops didn’t read nor respond to his messages. He goes upstairs to check on Tops. He tries hard to wake up an unresponsive Tops. Finally, he checks Tops’s forehead and finds Tops is suffering from high fever. He searches through the drawers for a thermometer and figures that Tops has high fever. He is alarmed and helps Tops with a cooling patch.

It’s pretty obvious Marwin has no idea how to care for a sick person. He calls his friend Max to ask for help, but the said friend bows out on him. Marwin has no other option but to rush with Tops to the hospital.

Tops wakes up the next morning to find Marwin sleeping uncomfortably on the sofa. He wakes Marwin up, who immediately inquires about Top’s health. Tops asks Win if he carried him alone to the hospital. Marwin blushes ten shades of pink as he admits that he did because his friend had bailed on him. He then discloses that Tops has been diagnosed with Dengue Fever. Tops quickly figures out that Win might have become alarmed, thinking that Tops might have COVID-19. Tops remembers that Win has a rehearsal and reminds him not to forget. Win doesn’t budge, so Tops assures him that he will be fine. Win halfheartedly leaves for the rehearsal.

After the rehearsal, Win rushes back home with the groceries and decides that he will cook for Tops. Obviously, he is not a Chef like our adorable Tops, and the ensuing disaster in the kitchen is hilarious. Yet, he somehow manages to put together a meal and gets back to the hospital. Tops thinks he bought the food, and Win lets him think the same. But as soon as he tries the food, it tastes weird. Tops guesses that the food is supposed to be Rice Porridge and realizes that Win actually cooked for him. The gesture touches him, and even though the food isn’t exactly appealing, he eats it.

Win continues the white lie about buying from it from elsewhere, but Tops tells him to stop it. Win admits and apologizes for lacking cooking skills. Tops rightly points out that he can’t sing or compose music like Win does. Tops explain that “Life is like food. Different Ingredients give different flavors. Some are good, and some are bad. But when we mix them, they turn out to be unexpectedly good“. Win seems satisfied with the explanation and urged Tops to eat more. Tops teases him, and the episode ends with both smiling at each other.

Tops is working in the kitchen when Win arrives with his friend Max. It seems that Max is back from Amsterdam. He introduces Max and is happy to hear that Tops is cooking for them. Max asks if this is same Tops was sick a few days ago. Max inquires about his health, and Tops assures him that he is feeling better now. With that, he gets busy with cooking.

Win and Max are having a conversation about their respective jobs when Win invites him to visit them often. He praises Tops’s cooking and asks Max about what he wants to eat today. Max wants to try something without vegetables. Tops is undecided with what to cook for them. They further discuss Max’s YouTube channel, and Win proudly shows him the videos on Tops Channel instead. Tops finally serves them the meal, and the two immediately dig in. The menu is noodles with nuggets, and they assume its chicken. They just gobble all the food. Tops is actually surprised that they ate all the vegetables. Max and Win are shocked, while Tops explains that the noodles, sauce and the nuggets were all made from vegetables. Tops explains that he cooked Beetroot Pesto with Amsterdam cheese, so the smell doesn’t exist. Also, he deep-fried the cauliflower nuggets, so they didn’t notice the difference.

Tops advises both of them to eat vegetables. Win promises to do so if Tops cooks more vegetarian food for him. Then they start flirting as usual, and Max is actually embarrassed by watching them. It becomes obvious to him that they are more than just “Roommates.”

My Opinion About The Episodes

Both Jeff Satur and Gameplay have this natural chemistry, which would make you believe that their relationship exists for real. “Caring” emphasized Win’s affections, and his feelings were obvious. Seeing Tops is pain distresses him. In their relationship, Tops has always been the caregiver. He makes sure that everything in their life balances out. So when the balance is upset, Win doesn’t know how to handle the situation. However, that didn’t stop him from trying his best. He rushes Tops to the hospital and spends the entire night beside him. His reluctance to leave Tops alone in the hospital emphasizes those feelings loud and clear.

Gameplay, on the other hand, is a most handsome patient. How he managed to glow even in the hospital scenes is beyond me! Even though Win lies about buying the food for him, Tops is quick to deduce that Win cooked for him. Even though the food doesn’t seem edible, Tops still wants to eat it. Because for him, all that matters is the thought and the effort. They are a match made in heaven!

The same thoughts continue in the following episode. The sudden entry of Win’s friend adds a needed twist. Max obviously knows that something is happening between the two. He can see their connection as well as the obvious concern about each other’s health. Although I did feel a little bad that Win just assumes that since his friend is home, Tops should cook for them. Also, both Win & Max are really gluttonous and don’t leave anything for the poor guy who spent all his time cooking the gourmet fare. Win really needs to work on his manners a little more.
I’m looking forward to watching the next episodes to look at what transpires between our adorable couple and how they are drawn closer to each other with time.