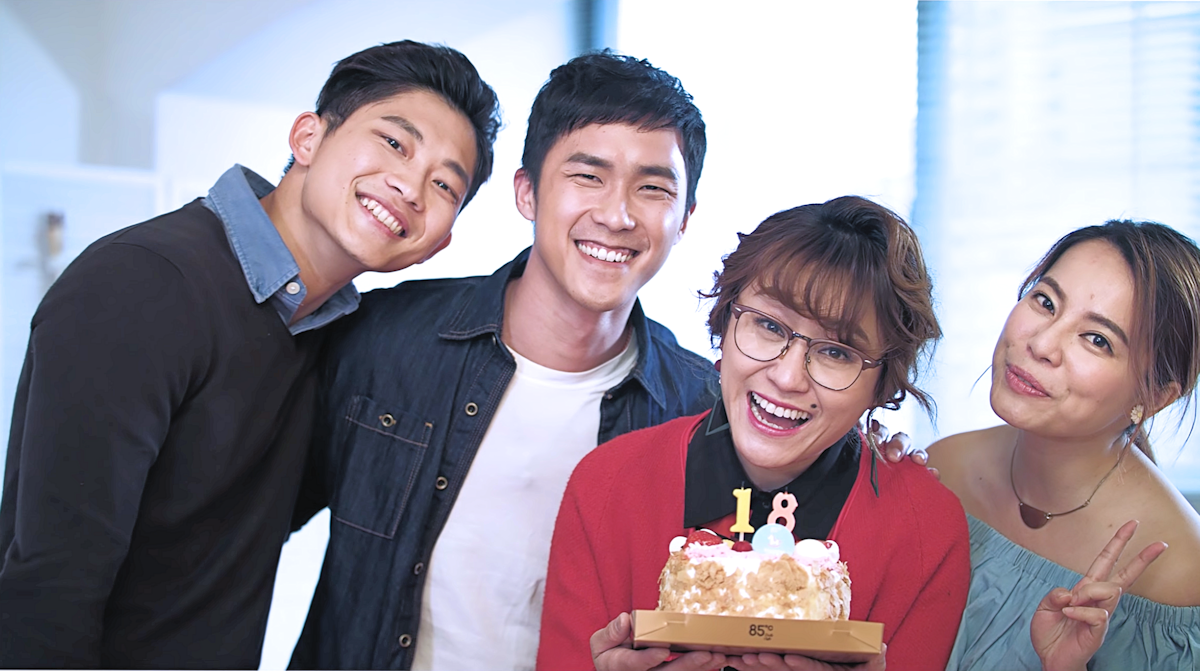 Kary’s curiosity gets her into major trouble with Hao Ran. As shocking truths stumble out of the bag, Amy and Hao Ran are faced with the important decision of revealing the truth to their mother. The finale episodes neatly tied up loose ends and resolved major issues that teenagers face when they are going through the “Coming Out” phase. It’s difficult and confusing, but it’s necessary. This show gave me important life lessons that will forever be etched in my memories.

Kary’s overzealous nature to interfere in her children’s lives leads to yet another hilarious situation. Schemes and major plotting ensues so that Kary can be sent away. However, the truth is far more complicated than they could have imagined, and everyone is left at loggerheads. Family is an important fixture of your life, and as Kary says, “Only family gives you a hand when no one else does.”

Curiosity kills the Cat. Kary, unable to contain herself, unlocks Hao Ran’s phone while he is sleeping and goes through his conversation with Nick. She screams in disbelief when she reads about them having a one night stand. That wakes up Hao Ran, who rightfully and harshly rebukes her for invading his privacy. They have a back and forth, which ends with Hao Ran walking out in anger.

Luckily, Erica was eavesdropping, and she calls up Wyatt to explain the situation. Hao Ran is on the crossroads when Wyatt rushes to him. Hao Ran is surprised as to how Wyatt is always there to support him whenever anything goes wrong. As they take a walk, Hao Ran relaxes and says that Wyatt’s partner will be indeed lucky. As Wyatt looks at him longingly, Hao Ran gets a call from Kary. He ignores it, and Wyatt offers to take him home.

Kary gets worried and wakes Amy up. Kary explains the situation and asks her to contact Hao Ran. Amy explicitly tells her that she isn’t getting into the middle of this war and promptly goes back to sleep. The next morning, Kary is sitting solemnly when Erica walks in. Kary tries to set her up with Hao Ran. Erica refuses, saying that Hao Ran already likes someone else. Kary assumes it’s Nick and vehemently insists on breaking off their relationship. She then inquires about any temples in Taipei. Erica seizes this opportunity and points her to a Gypsy instead. She lies to Kary that the Gypsy gives advice for minimal fees, and Kary jumps with joy.

Amy is at a cafe and orders coffee. However, the barista gets her breakfast as well. The Barista insists that their store manager has asked her to make sure that Amy gets her breakfast free every day. Amy finds this fishy and wants to meet the Manager, but unfortunately, he has already left. Erica calls her, and they both concoct a plan to fool Kary.

Kary arrives to meet the Gypsy. As planned, it is Amy disguised as a Gypsy, and she takes using her crystal ball to fool Kary. She convinces Kary that Hao Ran’s Ying and Yang are unbalanced. The only solution to this problem is that both mother and son should stay far away from each other. She also uses the opportunity to make Kary more amiable towards her daughter. Amy uses the opportunity to needle about Kary’s problems with her husband and is shocked to learn about their pending divorce. She strongly suggests to Kary that she should leave Taipei immediately or else Hao Ran would forever be gay.

Kary is sitting at the gym when Wyatt tries to console her. Kary laments about Hao Ran not replying to her. She wants to talk to him before she leaves Taipei. Wyatt is surprised and asks the reason for her sudden departure. She honestly admits that she is leaving because she wants Hao Ran to turn straight again. However, Kary confesses that she has nothing against gays, she just doesn’t want Hao Ran to live such a difficult life. Wyatt assures her that he will refund the full amount for her gym sessions. He also assures Kary that Hao Ran will surely contact her soon.

Hao Ran packs his bags and is leaving in a rush when Erica chances upon him. She questions him about going back to Nick, and Hao Ran denies it. Erica guesses that Hao Ran is going to stay with Wyatt. She advises him to get some action between the sheets, and Hao Ran fires back that Wyatt is not that kind of a guy.

Kary is sitting at a park, hoping that her kids will notice that she is missing. She keeps looking at her phone, hoping that Amy or Hao Ran will call her. But no such luck. Just then, a guy walks by. He is talking on his phone and is very rude as he grouses about not having time to meet his Mom. Kary gets angry and lashes out at him for not making time for his family.
Hao Ran gets settled at Wyatt’s apartment. Wyatt gets him his favorite drink, and finally, Hao Ran realizes that it was Wyatt all along. Wyatt apologizes for creating a misunderstanding between him and Kary. But Hao Ran thanks him instead. He also wonders if their story would have been different if he had met Wyatt before Nick.

Kary is waiting for the bus when Amy rushes to her and takes her back home. Hao Ran comes back to Amy’s apartment, and worriedly asks about their mother. Amy instead asks him if he is with Wyatt now. Hao Ran brushes off the topic and inquires about their mother again. Kary enters and assures him that she is fine.

Wyatt is jogging when Hao Ran messages him about successfully clearing all the issues with Kary. Hao Ran then confesses his feelings, and Wyatt jumps in joy. I’m so glad that finally after ages these two will be together. Wyatt is a genuinely nice person, and he deserves all the happiness in the world.

Amy and Kary seemed to have resolved their issues as well. As Amy leaves for her interview, Kary assures her that she has a secret stash that they can use until Amy gets a new job. As Amy enters the Vice President’s cabin, she is surprised to find the Coffee Guy there. He introduces himself as Hunt Chang, and Amy recognizes him as her school mate. He obviously wants to date her but instead asks her to join his company first.

Kary is having a deep conversation with Wyatt, trying to figure out his interests. Finally, she admits that Hao Ran told her about their relationship. She is happy that Hao Ran chose a good man like Wyatt and gives them their blessings. Kary also makes him promise that he will take good care of Hao Ran.

The show ends on a happy note as everyone gathers around to celebrate Kary’s birthday. She wishes that Amy gets married soon and that Hao Ran is always happy with Wyatt.

My Bromance has such an interesting mix of eccentric characters that it leaves you with fuzzy feelings. However, I must admit that I was undeniably wrong about Kary’s caricature.
In the scene with Erica, where she is trying to set her up with Hao Ran, Kary’s immediate concern isn’t about Hao Ran being gay. She doesn’t want her son to date a douchebag who won’t respect him. Although she does have problems accepting Hao Ran’s sexuality, it is not because she is disgusted. Kary is simply worried that Hao Ran would have to face difficulties in his future because of his orientation.

Her worries, however, seem to cease when she learns that Hao Ran is dating Wyatt. For a mother who unconditionally loves her children, she endlessly worries about them. She might sound snobbish, but that’s exactly the way most mothers are. Her only desire is that Hao Ran doesn’t get hurt in the future and always gets the necessary support from his family. An emotion I strongly agree with!
Another sentiment that strongly resonates in the finale episodes was Kary’s need for familial support. She is depressed and hence seeks her children’s attention. In our busy lives, we often forget to spent time with our families. Slowly we grow distant, and the damage is sometimes irreversible. So take time out to sit with your parents and siblings, learn what is happening in their life, disclose secrets, and find your inner peace. Because no amount of money can buy you the comfort and warmth that a HAPPY HOME offers!

Series Rating: 4 out of 5 stars [See our Review Guide]