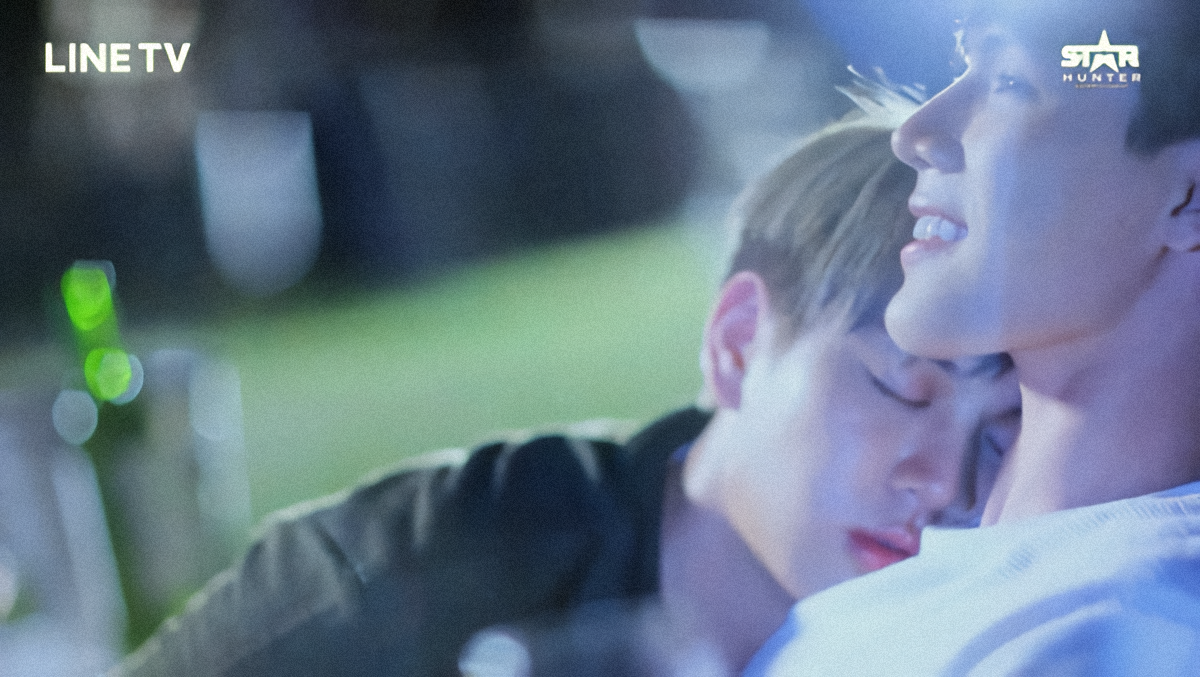 The second season of “The Moment,” starring Thanapon Aiemkumchai and Bank Thanatip premiered on  August 1st, 2020, to high anticipation. Bank and Thanapon reprise their roles of Dr. Mok and bartender Bay, along with Jet Jetsadakorn Bundit, who plays Bay’s boss Boston. This season, however, we have a new character in their midst, bringing turmoil to Mok and Bay’s perfect love story. TharnType star AA Pattarabut Kiennukul plays the flirtatious eye candy, Jimmy. Will Mok’s possessive nature stand the test of time, or will they fall apart? Let’s review the first two episodes and get to know them better.

Bay is on vacation with Mok. While he is checking something on his phone, Boss calls out to him. Bay is surprised to find him at the same resort. Just then, Boss’s overtly flirtatious friend Jimmy rushes in and introduces himself. He tries to get handsy with Bay, who mostly avoids any sort of contact with him. I’m sorry, but this scene was cringeworthy, with Jimmy acting like an over-excited puppy wagging his tail.

Next up, we have a dream sequence. Mok is seen walking with a bouquet. As soon as he reaches Bay, he hands over the bouquet to his handsome boyfriend. The said boyfriend then pecks Mok on his cheek, and that sets off sparkles. Mok is smiling like an idiot when he realizes that it was a dream. He rushes to meet Bay, only to find him sitting with Boss. Jimmy, yet again, rushes there, searching for his lost bag. Jimmy assumes that maybe his bag is in Bay’s room and asks for his room keys. True to apparent form, Jimmy tries to get handsy with Bay again, while both Mok and Boss watch with trepidation. As they walk out, Boss finally sees Mok and mockingly greets him.

Mok is stewing in his room as he remembers his conversation with Bay. He assumed that Bay had invited Boss and Jimmy. He angrily reprimands Bay and inquires about how Jimmy’s bag ended up in Bay’s room. In the present, Mok decides to cut the vacation and return home. As he passes through the lobby, the receptionist is shown inquiring about the same orange bag that Jimmy lost. Mok realizes his mistake and rushes out to meet Bay.

Mok actually rides a horse to meet his Prince Charming. The show’s cinematography is at another level. Bay is stunned as our hero walks to him in slow motion and hugs him tight. Mok apologizes and promises that he will not jump to unreasonable conclusions in the future. Bay being the sweetheart, easily forgives him. They have an adorable moment where Mok whines about Bay not taking any pictures of him on the horse. Bay asks him to promise that he will be cute like this throughout their trip.

We finally get to know about the mystery behind the lost bag. Since their assigned room will have been available only after check-in time in the afternoon, Bay offers Jimmy and Boss his own room for the time being. Jimmy, as usual in more interested in flirting with Bay and forgets his bag in the lobby.

Mok is gazing at the night sky when Bay arrives with a bottle of wine. Mok admits that since Bay introduced him to stargazing, he always watches the starlit sky whenever he is upset. Bay pours him a glass of wine, and they have a charged moment. Bay gets flustered when Mok touches his hand and rushes back to his seat. Our Doctor is obviously quite proud as he mercilessly teases Bay about having a fever. Bay brushes away his concerns. They enjoy the wine while conversing. Bay gets totally drunk and slides closer to Mok. Just as he is about to kiss Mok, Bay falls asleep on Mok’s shoulder. Mok is disappointed yet adoringly holds Bay closer.

Mok and Bay are with Boss and Jimmy. It’s pretty obvious that Mok wants to be anywhere else except with them. Jimmy suggests that they play a game of ball. They decide to split into teams where both Boss and Jimmy try hard to get Bay into their team. At last, they vote on swapping teams when anyone loses. The game starts, and as they proceed, a lot of swapping happens. After a while, they decide to rest, which turns into a random striptease event. I laughed so hard because Bay was looking at them like they have lost their mind. But I got to drool over their hot bodies, so who’s complaining?

Later, Bay is sitting alone when Mok walks up to him. He talks about the game being exhausting and then realizes that Bay is actually sleeping. Mok sits closer to Bay and rests Bay’s head on his shoulder. He even tries to shield Bay’s eyes from the sun rays. Bay smiles and thanks him.

Both of our main leads have adorable chemistry, and that made “The Moment” special as well as this sequel. Mok and Bay are like two pieces of the puzzle that fit together. In Season 1, we had a heartbroken Mok, hell-bent on getting drunk. In Season 2, however, we have Mok, who is obviously in love, and the happiness reflects on his face a thousand times. But that doesn’t mean he has given up on being a grumpy bear. Mok is territorial like any other alpha male. Although Bay doesn’t realize Boss’s apparent interest in him, Mok does. That’s enough to make him a bit disgruntled when he finds Boss and Jimmy intruding into their private haven.

He makes erroneous assumptions, jumps to conclusions, and retreats. I really appreciate Bay for his endless patience while handling Mok’s wild mood swings. But the point of contention remains that Mok realizes his mistakes and apologizes. Star Hunter Entertainment’s collaboration with media giant Line TV promises even better cinematography than the first season. The sheer grandeur of the locales and close camera shots of the handsome main leads will leave you astounded.

Stealing moments from the first Season, where Mok and Bay enjoy stargazing, brings back fond memories. They are exploring their new relationship, and although Mok loves to get Bay flustered, they are in sync with each other’s emotions. Mok is trying to become more understanding as against his earlier demeanor. They have sensual chemistry that draws you in and leaves you mesmerized. I’m curious about how Mok sees this new relationship since, obviously, he identified as straight before. The tension between Mok and Bay sets the screen on fire, and you hope that they would kiss at last. Thanapon Aiemkumchai and Bank Thanatip have the kind of heat that sets them apart from the usual BL couples.

I’m also confused about Jimmy’s introduction, though. If the show’s producers were looking for an additional plot point and decided to add jealousy, then we already have Boss contending for Bay’s heart. Why the added complexity by the character of Jimmy, who’s obviously a flirtatious blabbermouth? After having watched Pattarabut play serious and challenging roles in “Tharntype” and “Hotel Stars,” his Jimmy seems lackluster and disappointing. I’m hoping that by the end of the season, they add something better to the storyline and give us a more memorable arc as the first season did.