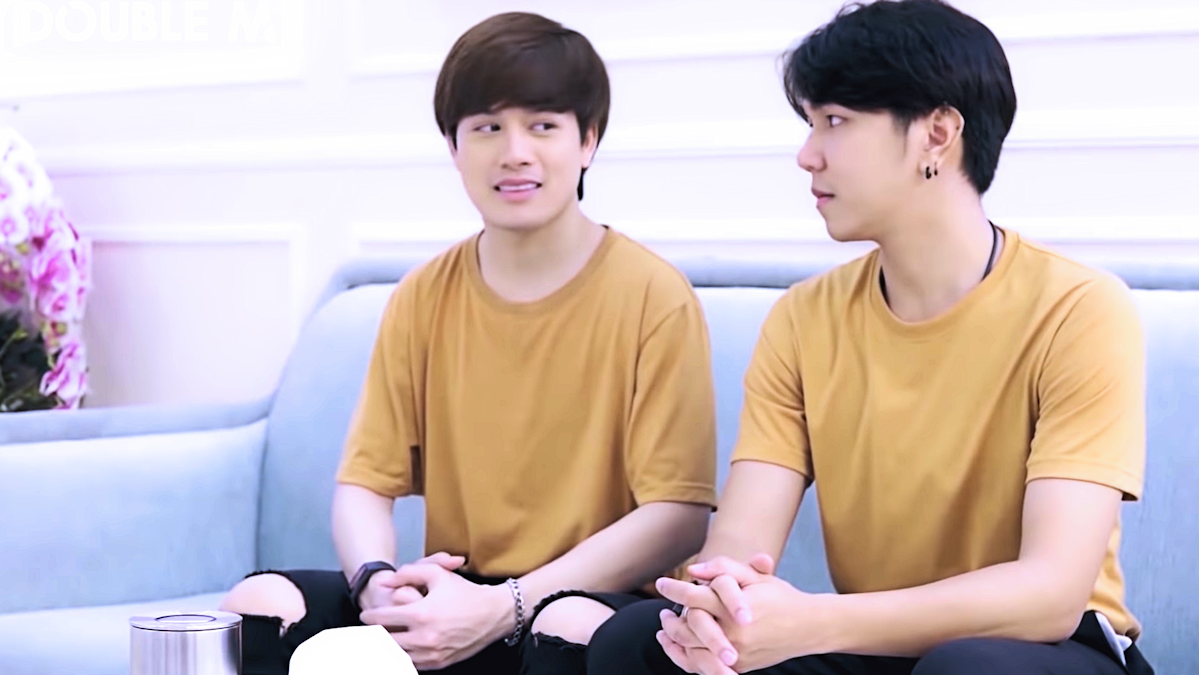 On August 16th, when the trailer for Episode 4 was released on Twitter, the Roommate Series team also pinned the message below for the fans because a lot of us were surprised and disappointed to see that this series only has four episodes –

The “Roommate the Series • This room is for only you” is a small project that all of us wanted to create as a Boys Love series. All of us, the staff, and the actors worked together to think and create this series for ourselves.  [We] do not have the budget. There are not any sponsors.  Everything we do [was done] by ourselves. And [we] just want to make a great short-series on our channel, so we [could] only do four episodes. Thank you for all [of] your support. Every criticism and compliment, every encouragement, and everyone who loves and supports our series. That [is] beyond our expectations. If there is an opportunity, [and] Double M Studio and “Roommate the Series • This room is for only you” get support from a sponsor, we hope we’ll be able to create works that will come out for everyone to see in the future and we will make it even better.

Fans have poured in messages of disappointment and also of gratitude for making a beautiful little show, which was both similar to and different from most of the Thai BL shows we’ve seen in past years. But before we talk about that, let’s see what episode had in store for the viewers and our two boys.

The episode begins from the scene where Sky is upset and yells at James for coming home late and not even informing him about it. James is annoyed a little, but he still shares his number with Sky so that he won’t be worried next time. The next day, Sky takes care of James when he is unable to wake up because of the hangover. Later, Sky convinces James to take part in a “couple” photoshoot so that they can get a free beauty treatment. James tries to ask Sky if he is gay again, but Sky still refuses to reveal the truth.

After another evening getting drunk, James returns totally sloshed, and Sky’s attempts to get him into the shower, and they end up in an (old reliable) accidental kiss. It’s not definite that James remembers this or not, but the boys do get closer to each other during the time jump that’s shown in the story. The episode ends with the probability that Sky might have to go away or move out for some time to take care of his aunt, something that makes James appear to be unhappy.

The third episode clearly shows Sky’s growing feelings for James, and also his hesitation in confessing the same. James is comfortable to flirt with Sky, as he mentions paying in “some other way” with a smirk when Sky refuses to take money for food & medicine. He also wants to know Sky’s feelings, but instead of asking directly, he tried to know if Sky is gay. His awkwardness in this scene felt more like he was nervous what Sky’s answer will be and how it would affect both of them [that bullet was dodged though] The scene at the beauty clinic was a way to add some humor to the show and also portrayed how happy Sky was to be doing that with James, even if for pretense. He looked so adorable in the scene while James felt shy and perhaps uncomfortable as well, but more as in having to pose in front of a stranger.

I wish they had made this scene shorter and given us more scenes of the two boys bonding and having fun together. We do get to see them doing everything together and being close, but I personally would have loved to see those scenes more focused as a story plot in the episode. Nevertheless, not many complaints because the two looked so adorable together, and it was a flawlessly done time jump before the last scene.

From a shaky first episode to a really good written Episode 2 and the adorable Episode 3, this show really stepped up its game. The time jumps were an indication that the show might be a short one, but it is a major disappointment that such an honest work had to be this short. The trailer for episode four looks promising, and  I would love to have a good conversation between Sky and James to know of their feelings not at that moment but how and when it all started for them. It is quite clear that both have mutual feelings for each other, and Sky is not a closet gay, but what about James? The show attempted to capture the essence of a BL relationship, views from the Yaoi friend characters, a little ribald humor, but it always kept the story revolving around the two main leads.

There was never a moment that did not reveal their changing dynamics, and it was so natural to see them together. As Sky wondered at the end of the third episode, if there would be a day when they would be “lovers,” the viewers have the same question and are eager to see how it is handled in the next episode. I am sure the writer & director will stay clear of a non-con situation or an overdramatic showdown but rather a sweet confession that more suits these two amazing characters.

James and Sky are quite nice and mature, with their “guy-next-door” looks, and vibes.  They are very different from most BL couples where one is quite a jerk to the other in the beginning. They are honest and approachable always, which makes them more relatable for the viewers [at least I prefer them over the arrogant ones.]

As with many short dramas, there are a lot of unanswered questions, and many might just be left as it is. So while the team gears for the final episode and hopes to come up with longer fulfilled stories in the future, I for one would be praying for a sequel/reboot/movie to know James and Sky’s story in detail because let’s admit, these two actors definitely nailed their roles in their very first foray into web drama, especially for a BL.