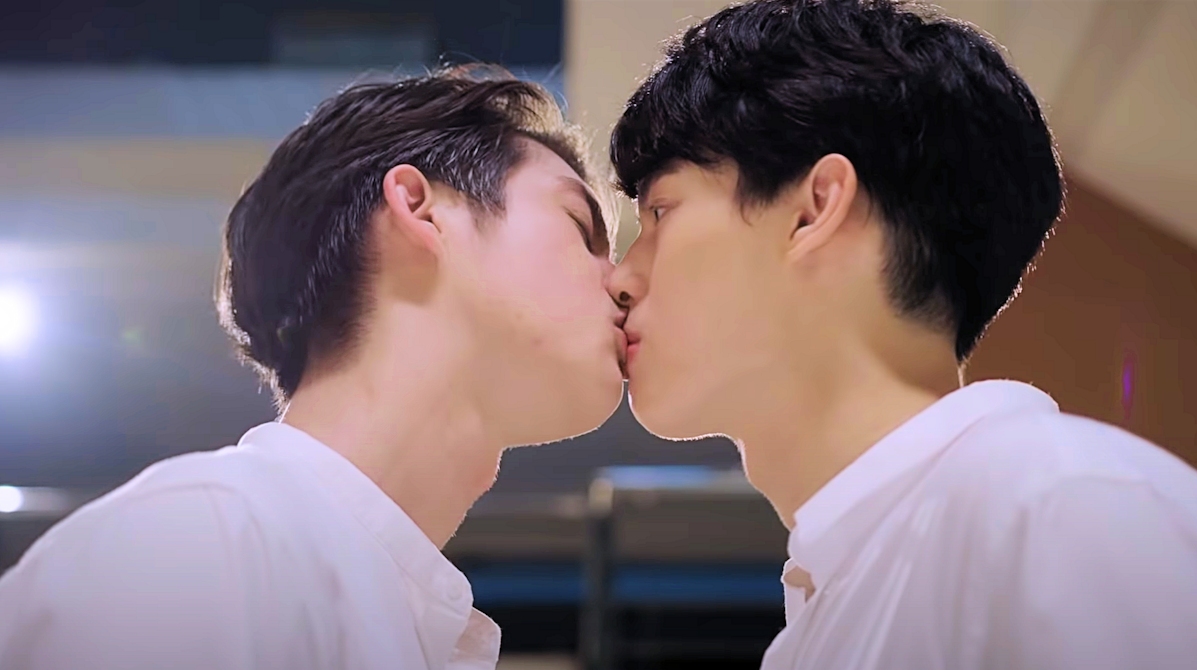 Everyone who knows me on twitter is aware of my love for 2gether the Series [yeah, even the high-five did not make me like #SarawatTine any less], so when Still 2gether was announced with a different director, I was very excited. The trailer and the first episode totally lived up to my expectations (and then some). The first episodes ended on a really high note with a lot of humor, love, and quite organic conflicts with a resolution for all of them.

It seems the director and writer sat down and watched the whole first season and made a note of every scene they could do better and delivered on that promise. The re-enactment of the snack game and the quick kiss by Sarawat I’m sure made many viewers pause and rewind to confirm that it really happened [I know, I replayed it twice]. Guest start Jennie made an appearance in this scene, and she was her natural self. She hit all the right notes for humor, fangirling, and her screen presence even overshadowed the lead couple for me.

Sarawat and Tine faced some conflicts in this episode. First, when Tine had to step down as secretary of the music club and take over the Cheerleading club and then when both find their clubs sharing neighboring rooms, making enough noise that neither club can practice effectively. I enjoyed watching both of them in these scenes as they never let it become a huge argument.  Rather they worked together to resolve the situation for each other’s respective club. It was also interesting to see that the conflicts were neither from another love angle, nor forcibly introduced artificial situations. However, being leaders of their clubs, they should have realized that they couldn’t work well in such close proximity because of the noise each makes. Not to mention how the situation was made much worse by P’Dim’s out of control ego. On top of that, P’Dim has already graduated and is choosing to hang around the Music Club for professional and social reasons, so no one really has authority over him. Bonus points to the writer for this and to use it to show a different face of the relationship between Sarawat and Tine.

Sarawat and Tine have many sweet moments in this episode again – supporting each other, giving encouragement, celebrating Tine’s birthday, and learning to balance work with personal time together. I kept wishing that all this should have been present in Season One already, so this series would not have gotten so much flak from the viewers.  However, I am not the one to complain when I am getting all this fluff from the handsome duo now.

Man and Type have always been a special second couple for me in 2gether, and I am glad we see them living together and being such an adorable couple despite their opposite personalities. This episode also brought some trouble for these two as Type is given a promotion with the condition that he will have to move to a different city. Even though he hides it from Man while he figures out the dilemma, it is Man who helps him decide in the end, as any good couple would do. Again, no unnecessary drama and misunderstanding but really good communication and display of affection by the couple. These two are so much more naturally adorable than our lead couple at times, and while we are talking about them, let’s not forget how amazing they looked in the shower scene together [More of that for other couples too, please].

And then we have Mil and Phukong still playing the same game of cat and mouse most times. In the final episode of 2gether, I was not at all happy with the way Mil and Phukong ended because that hinted at them being together or at least trying to be. I do not appreciate Phukong being OK to be a second choice for Mil so soon after his failure with attracting Tine. Even if we assume its been a year now and Mil would have moved on, why are the writers still making Phukong do everything that Tine did in the previous season? It’s like making Mil notice him because he is similar to Tine, which for me, is very weird. I feel Phukong deserves better, so all his efforts to get attention from Mil made me a little sad but full marks for him doing anything to win Mil, even if it includes listening to all stupid ideas from Man & Boss. I had not paid much attention to Frank in the previous season, but I really liked his acting in this episode, and it reminds me that I need to watch his & Drake’s earlier show at some point because the two look really good together. I just want a better story for them here because this one isn’t working very well.

Overall another brilliant episode in the series for me that made me so happy that I even forgot everything else for the whole time I watched. Then and again, as I write this post, I know I am smiling again. Many viewers have stated that this season or extension of the first season is marked by not having any character growth or story to drive it forward, and is just catering to the fans or riding the success & popularity of Sarawat-Tine from the previous season. Well, I am not going to argue with anyone for any opinions they hold, but the way the series is topping trends and the fact that fans are loving this mini-season makes it a win for everyone involved in the show.