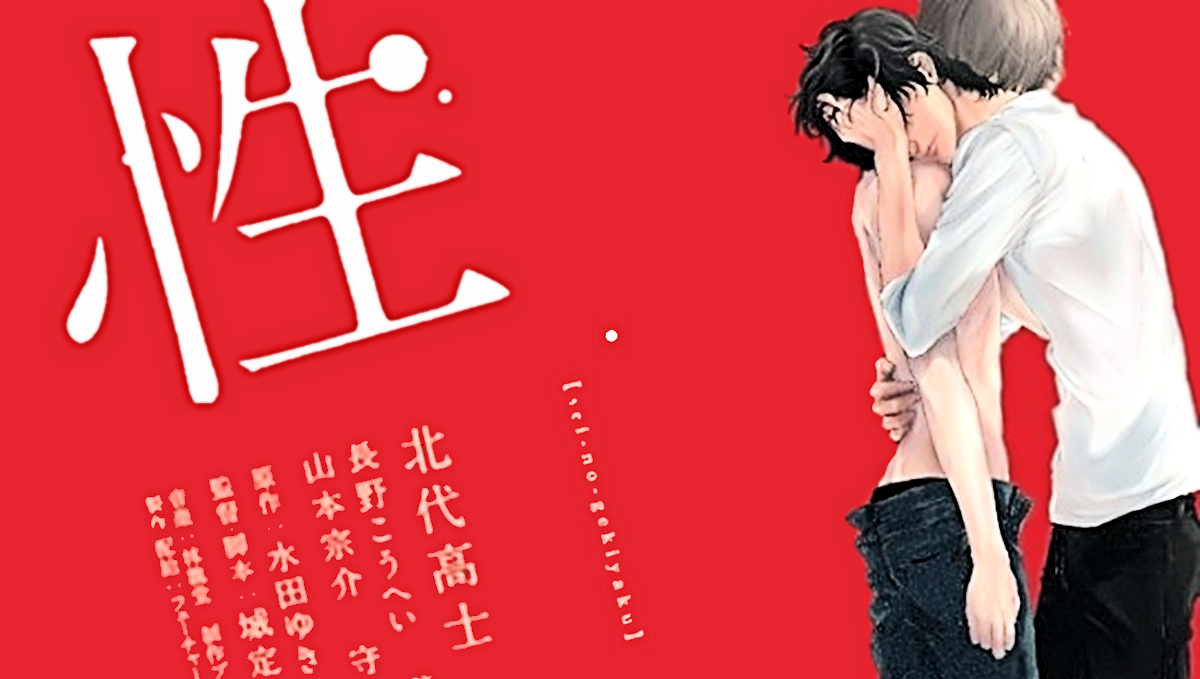 Now appearing on GagaOOlala! That survival instinct. That will to live. That need to get back to life again is more powerful than any consideration of taste, decency, politeness, manners, civility. Anything. It’s such a powerful force – Danny Boyle

Human tendency to feel regret for past decisions and learn from them is indeed a lesson in survival. But what if you fail to give yourself that chance to regret and repent? What if your decisions end up changing your destiny and inevitably damage someone you love? Translated to English as Sex and Dangerous Drugs, Sei no Gekiyaku – 性の劇薬 is a fast-paced psychological thriller that is equal parts horrifying as well as innately humane. The film’s cathartic attempts to instill “Survival Instincts” into a suicidal character aren’t exactly orthodox.

Using sexual assault and rape as a method to control the victim’s fragile mind, the film has some pretty disturbing scenes which may be difficult for some viewers to watch. Psychomilk strongly condemns any sort of non-consensual event, but despite that, the film shines the spotlight on how “Suicide is not the only solution to life’s problems.” Sei no Gekiyaku draws a poignant parallel between the victim and his assailant’s life story and you are left wondering if their meeting was really coincidental or fated?

Kitadai Takashi portrays the character of Dr.Yoda Ryoji. This character’s moods move in grey shades ranging from vulnerable to psychotically violent. He is very dedicated to his profession, so much so that he fails to recognize his dead lover’s suicidal tendencies. This failing changes his personality as he becomes overtly temperamental.

Watanabe Sho portrays the victim Katsuragi Makoto. Katsuragi works as an elite office worker, but enduring his parent’s sudden death and his girlfriend’s betrayal ultimately drives him to the desire to commit suicide. From there, he gets caught in the web of sexual torture and deceit until he learns to fight back.

Sei no Gekiyaku narrates the story of Makoto Katsuragi, an elite office worker. His parent’s sudden death and his girlfriend’s cheating ways destroy his carefully orchestrated life. In a drunken stupor, he attempts to commit suicide by jumping off a building’s rooftop. Unbeknownst to him, Katsuragi is saved by a mysterious man, Ryoji Yoda. Yoda, instead of being the savior, becomes a dark, mysterious presence in Katsuragi’s life. Under Yoda’s “confinement training,” Katsuragi experiences unimaginable pain and torture as he slowly begins to fight back and realizes that his instincts to survive are much stronger than his desire to die.

My Thoughts Of The Movie

Finally, the show’s producers decide to give us a reprieve from the sexual torture, and we get to learn more about the victim, Katsuragi Makoto. He is a highly respected employee and a dedicated son. But unfortunately, his parent’s sudden death pushes him out of his “living comfortably” zone. Also, finding out that his girlfriend is cheating on him is the final straw, so to speak. While in a drunken stupor, he decides to jump off a rooftop, and before he can accomplish that suicidal act, a mysterious savior pulls him back and claims his right on Katsuragi’s life. The scene would be romantic, but the savior isn’t an angel, but a devil in disguise!

Thus begins the solitary confinement phase where the so-called savior strips Katsuragi of his clothes, his dignity, as well as his sense of worth. Every day is a new form of torture as he tries to break down Katsuragi’s will and surprisingly faces a strong retort. As Katsuragi refuses to give up or enjoy the sexual torture, his tormentor’s claws grow stronger. This phase was surprising because Katsuragi had given up on life and wanted to die. But the physical pain he endures starts the reversal of those tendencies and makes his mind grow stronger.

Another scene that surprised me was where Katsuragi breaks a mirror and decides to use a broken glass piece to kill his assailant. However, when faced with his target, he can’t bring himself to commit that level of violence against another human being. The scene was surprising because it was the first honest conversation between them. When his assailant asks Katsuragi the reason for his decision to commit suicide, Katsuragi dejectedly admits that he has lost everything. The next question from his assailant resonates, “If you die, will you get back what you’ve lost?” This surprises both the audience as well as the victim. It’s the first visible dent in the impenetrable armor that the assailant wears, and you catch glimpses of this suppressed humanity. Deciding to spare Katsuragi from more torture, the assailant leaves behind a vial of poison, and you bear the foreboding tension of the consequences.

From there, the storyline shifts to give the audience a view of a more humane side of the assailant. We finally learn that he is Dr. Yoda Ryoji. As he goes about his daily activities, you realize that he is a doctor par excellence, and saving his patients’ lives is of utmost importance to him. I was shocked by this sudden change in plot because, as Yoda solemnly promises his patient that he will save his life at all costs, you wonder how this person can be the same barbaric individual who stoically disregards Katsuragi’s pleas to cease the torture. On the other hand, the film portrays a sudden behavioral change in Katsuragi, who concludes that committing suicide is, after all, a self-centered and cowardly act. I just love this contrast, where one character becomes stronger, and the other becomes seemingly weaker. In a moment of apparent infirmity, Yoda commits the emotionless brutal act of raping Katsuragi.

This movie continuously shocks you with its twists and turns, as Katsuragi’s sudden release from confinement, follows the rape scene. As we try to understand the transition we’ve just witnessed, Katsuragi strikes a chord when he starts displaying symptoms of Stockholm’s Syndrome. Following Yoda on his journey of the past, the film peels off the layers of this character, as we learn more about Yoda’s boyfriend’s untimely suicide. We understand Yoda’s resolve to awaken Katsuragi’s hidden desire to survive. However, why he thought that sexually torturing Katsuragi was the right way to do it, is still unclear. I can understand his logic, but the ways he goes about it is so disturbing that it’s difficult to watch.

Both Katsuragi and Yoda carry massive amounts of guilt. Yoda because he couldn’t perceive his boyfriend’s suicidal tendencies while Katsuragi feels he is responsible for his parent’s death. This guilt draws them together as Katsuragi starts to understand Yoda’s pain. I’m not judging Katsuragi because immediately after his parent’s death, he spent his grief in confinement. There are only two ways to his behavioral pattern – strong hatred towards his rapist or unusual attachment to the only human presence in his life. For some reason, he deigns to choose the second.
The show’s ending credits are somewhat surprising as the two characters willingly have sex after Katsuragi saves Yoda’s life. I was disappointed that the film had an open-ended conclusion, which left the protagonist’s relationship subject to the audience’s imagination.

With that being said, the two actors are at the heart of this film. Watanabe Sho portrays Katsuragi’s pain, suffering, and strength with an honesty that leaves you shell-shocked. You have to imagine his plight at being naked for around three-quarters of the movie, with all the production personnel on set all the time. We must really applaud his emotional strength as well as acting prowess because he delivers the character with a absolutely solid conviction.

The movie would not make any sense if Kitadai Takashi didn’t carry the weight of playing a role that switches from antagonistic to positive. In the first half, where he physically and emotionally tortures Katsuragi, Kitadai draws the audience’s hatred. However, when you understand the character more, you see the vulnerability underneath and appreciate his acting talents.

Certainly, it is not an easy movie to watch, but Director Jojyou Hideo manages to cast a spell that keeps you hooked, and you can’t help but wait with uneasy anticipation at to what course of action each character chooses. The concept of choosing the basement of the same hospital where Yoda works as a surgeon contravenes one’s normal sense of decency and is certainly ironic because it adds certain credibility to the storyline. If you are a connoisseur of sweeter romances, then this movie is definitely not for you.

Watch this movie if you are looking for something dark, heavy, and twisted, but expertly executed.