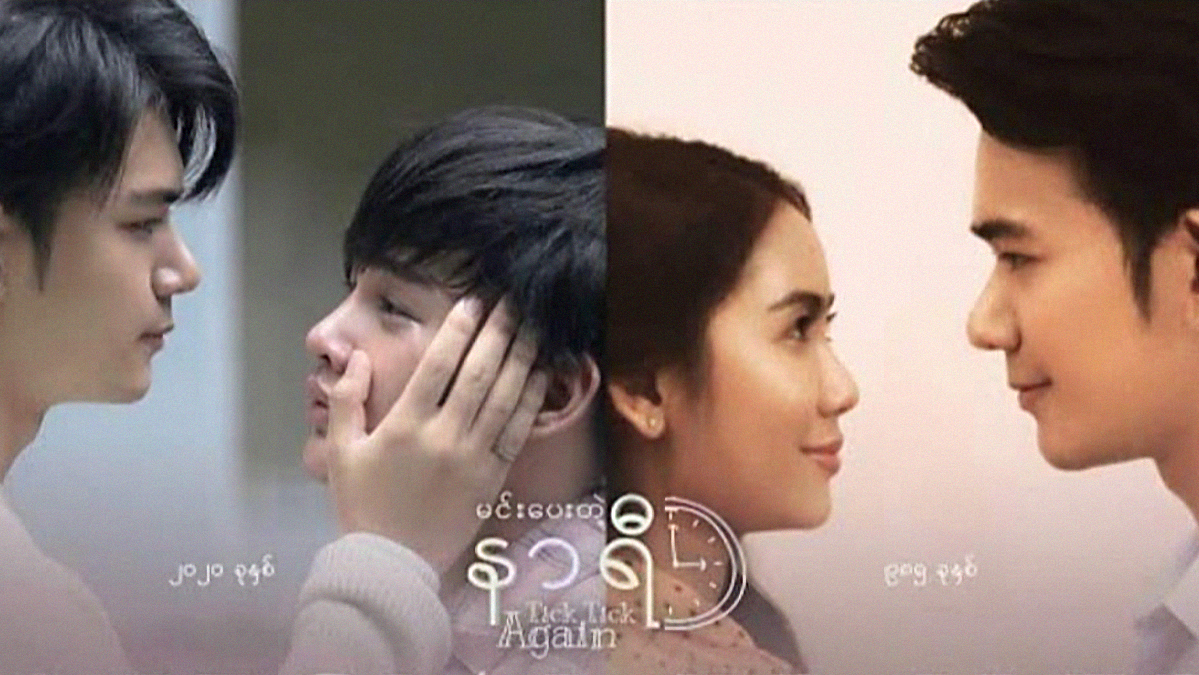 Never be bullied into silence. Never allow yourself to be made a victim. Accept no one’s definition of your life; define yourself – Harvey Fierstein

It takes a certain amount of guts to produce a reincarnation saga based on homosexual relationships in a country like Myanmar, where LGBTQ+ individuals are subject to official persecution and discrimination, along with legal and social challenges not experienced by the straight community. When I’m talking about courage, it’s not just the Directors and Producers or the crew but also the lead actors that carry the burden of bringing to life the “Gay Characters.”

It is daunting, unassuming, yet daring. In an unprecedented move, Love TV has daringly crossed the line to anchor their rather ambitious BL project “Tarrar: The Star Series.” But before the original film’s premiere, they have released albeit an alternate version of the film “Tick Tick Again,” with the same actors playing the main leads. I was never a huge fan of reincarnation dramas simply because I don’t much believe in the concept. But then Thai BL “Until We Meet Again” came out, and my perspective changed. So, when I saw the trailer of this movie, I was ecstatic.

Tick Tick Again is a transition between two eras, a love story that transcends time and gender. Writer-Director Ko Set has created an alternate world that phases between the present and past. The stories are almost parallel, and the curiosity keeps you on edge. The film is fast-paced, and even though it has straight romance piqued with BL elements, you appreciate the effort. Some love stories take more than a decade to reach fruition. Tick Tick Again is one such saga, where two souls reincarnate to complete to their agonizing love story.

Moe Nyi Nyi is portrayed by the Min Set Thit. He has constantly plagued with nightmares from his childhood, where he envisions a love story between an adorably sweet couple. They belong to a long lost era, and Nyi Nyi doesn’t understand his connection with them.

Sithu Oht Soe plays the dual roles of Linn Maung (past) and Di Par Maung (present). Linn Maung was in a happy relationship with his girlfriend, Moe Ni Ni. But unfortunately, they are separated as a couple by an accident. In time, he reincarnates later as Par Maung and suffers from the same nightmares.

The utterly gorgeous Chuu Sitt Han portrays the character of Moe Ni Ni. She dies a gruesome death while trying to elope with Linn Maung and reincarnates in the present as Moe Nyi Nyi.

Have you ever loved someone with no limits, so much so that you feel you could leave this Earth to be reborn again, just to reunite with them?

Tick Tick Again is a story of reincarnation with a twist. It spans across two lifetimes and follows character Moe Nyi Nyi’s journey as he retraces events from the present and progresses to the past. He attempts to unearth the connection between him and the happy couple who continually appear in his dreams, and it leads him to a shocking discovery. As he comes to terms with the honest truth and accepts the new reality, Nyi Nyi is forced to make an important decision that will change the course of his life forever.

My Thoughts of the Movie

Tick Tick Again would essentially be a flawed attempt at recreating a believable universe if the characters weren’t so endearing and realistic. There are plot holes, but the most amazing fact remains that the film has managed to beautifully depict the relationship between the main characters that transcends two major eras in time. You empathize with Moe Nyi Nyi as he is constantly assaulted with memories about a couple who seem to be in love.

The images are jarring, but he always manages to remember both of them as well as wristwatch which seems to be a symbol of their affection. So imagine his shock when one fine day, one of these characters walk by him solemnly. It’s like his worst nightmare comes alive. The only difference is that the man in front of him is modern as compared to the one he sees from the past in his dreams, and this one looks unusually sad. For some reason, instead of being afraid, Moe Nyi Nyi is drawn towards this mystery man.

A chance encounter gets them closer, and Mo Nyi Nyi becomes friends with Di Par Maung. This turn of events is where this story takes an interesting turn because we are shown a beautiful visual montage of moments between both of the couples. The romance between Nyi Nyi and Par Maung is interspersed with Ni Ni and Linn Maung’s love story. It’s an indicator that the present couple shares the same providence as in the past, albeit the only difference being gender.

As Nyi Nyi grows closer to Par Maung, he experiences an emotional attachment as well as confusion. He likes being with Par Maung but is unable to accept his feelings. Maung in Nyi Nyi’s dreams is straight, and he has to assume the present one is the same. I love how this movie projects his apparent fears because first, he is questioning his own sexuality, and secondly, he is also apprehensive about the mysterious girlfriend in his nightmares.

While Nyi Nyi is figuring out his own emotions, the film switches the focus to a shocking revelation. We, at last, catch a glimpse of his mother, who surprisingly turns out to have been Mo Ni Ni’s best friend. She glances upon Nyi Nyi’s picture with Par Maung and is absolutely stunned. At last, she recounts the poignant romance of her best friend Moe Ni Ni with her close friend Linn Maung. Both of them had planned to elope, but unfortunately, Nyi Nyi died in an accident. I have issues with this turn of plot. Firstly, it’s unusual that Nyi Nyi doesn’t recognize that the mystery girl’s best friend is his own mother until she reveals everything.

It is a little incredulous that he doesn’t recognize his own mother’s younger version. Secondly, Nyi Nyi’s Mother assures him that he is actually Moe Ni Ni’s reincarnation. How she comes to this assumption is unclear. Is it because she can’t accept that her best friend is dead, or is it her intuition? She even goes to the extent of naming her own son after her dead best friend. The real surprise was her easy acceptance of Nyi Nyi’s relationship with Par Maung. There is no confusion on her part when she voices her support. I’m guessing it is because she wants her best friend to find her long lost love, but still keeping in mind the Myanmar societal norms, Nyi Nyi’s mother is surely quite fearless.

But unfortunately, his Mother’s courage doesn’t rub off on Nyi Nyi as he resolutely decides to bury his feelings and never disclose the truth to Par Maung. I wouldn’t say I like this self-sacrificing tendency often displayed by the main leads. But thankfully, the decision is taken out of his hands when the movie switches focus to Par Maung. We learn that he has been experiencing the same nightmares as Nyi Nyi. The connection wasn’t one-sided, and although Nyi Nyi reincarnated as a boy instead of a girl, it doesn’t change Maung’s feelings.

I’m guessing that was the message that the film Producer’s wanted to imply. Love is irrespective of caste, creed, and gender. Maung loves Nyi Nyi, and his Nyi Nyi’s gender isn’t an issue for him. I also want viewers to appreciate the fact that despite the strict restrictions in Myanmar, the filmmakers didn’t portray the main lead’s relationship as a “Bromance” or “Friendship.” They were daring enough to conceptualize the main characters’ gay relationship, and although they didn’t show overtly intimate scenes, their love is loud and clear. Chinese Mainland authorities could take a cue from this playbook.

I spent a lot of time comparing Tick Tick Again with UWMA. Yes, both BL’s have different storylines, but the base concept is the same – reincarnation. I couldn’t help but compare Min Set Thit with Fluke NaTouch. Fluke is obviously the more experienced of the two, but that doesn’t mean Min Set Thit wasn’t convincing in his performance. He brought the character to life, and it’s not an easy job. Displaying Nyi Nyi’s confusion and fears, Min Set Thit is to be admired for his convictions. You feel the character’s indecision, pain, and anxiety.

Similarly, Sithu Oht Soe may not be comparable to Ohm Thitiwat, but playing a dual-character in two different eras is a daunting task, but Sithu Oht Soe manages. Di Par Maung’s romance with Nyi Nyi is as real as Linn Maung’s undying love for Ni Ni. He is a good actor if he can make you fall in love with the parallels in both because I did.

The movie ended on a positive note clearing all misconceptions, and that’s a huge plus point for me. Watch this movie if you are looking for lighter fare that tends to be sweet as well as agonizing. I fell in love with the unique characters, and I’m sure you will appreciate the honesty with which this movie was conceived. The main leads’ adorable chemistry is just an added bonus. Enjoy this arduous present saga of love as well as faithfulness!