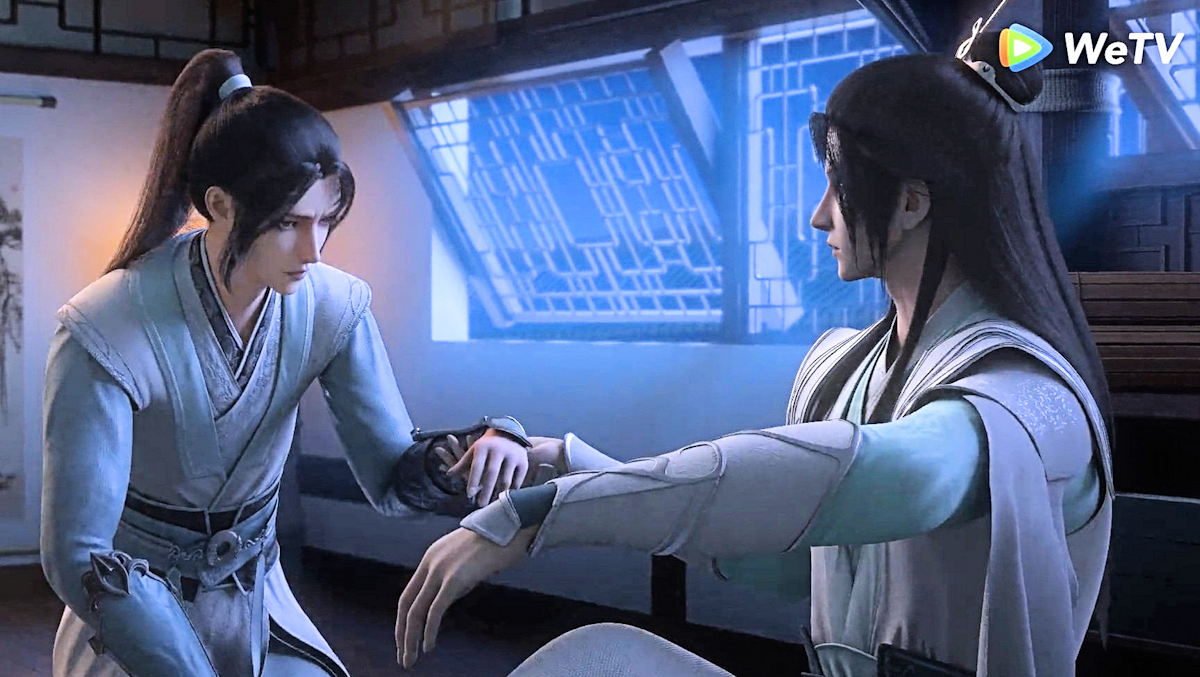 As Shen Yuan and Luo Binghe are stuck in the Nightmare, the Evil Demon uses painful memories from Binghe’s past to make him lose his calm. Despite Shen Yuan’s repeated efforts, Luo Binghe keeps repeating the same mistake that keeps moving them from one dream sequence to another. Although they gain consciousness briefly, Nightmare isn’t done with torturing Luo Binghe. With Shen Yuan at stake, Luo Binghe has lost his guide and must decide for himself. However, the decision would make or break his relationship with Yuan. Keeping in mind that Shen Yuan consistently warned him about Nightmare’s low-life tactics, Luo Binghe will have to win this “Battle of Wills” to save his “Dear Shizun” or lose him forever.

As Nightmare recreates illusions from the most horrid and painful memories in Luo Binghe’s subconscious, Binghe’s defenses are broken down rapidly. Despite various attempts by Shen Yuan to calm him, Luo Binghe keeps attacking the illusions, which could very well damage his soul. However, for some reason, Binghe succeeds in breaking through the illusions. As the Demon Nightmare figures out Luo Binghe’s weakness, Shen Yuan is rendered unconscious. Nightmare digs deeper into Binghe’s mental state and finds his soul embodiment has traces of Demonic Aura. He decides to recruit Luo Binghe as his disciple and offers him a deal, which could forever change Binghe’s life course!

While Shen Yuan and Luo Binghe are swept into the Dreamland by Demon Nightmare, they finally find one person with a face. As they follow him, they find that the person is a teenager, and he is being bullied. Luo Binghe wants to help him, but Shen Yuan restricts it. Since Shen Yuan has a better understanding of this storyline, he knows that the scene is a recurring illusion from Luo Binghe’s memories. Despite that, when Luo Binghe realizes that the teenager is his past self, he loses his calm. I have only seen this kid get angry once before, and most of the time, he is calm and collected even when his Seniors bully him. But somehow, today, the dam has been broken, and the resulting outpouring of emotions take a toll on Binghe’s tight control. As he hits the illusions, Binghe is flung backward. Shen Yuan warns him again that attacking the illusions is like hitting himself. Suddenly the dimension changes, and they are plunged into another scene.

Nightmare keeps spinning through various visual planes where Luo Binghe comes face to face with his most painful memories. He almost turns into the little boy when faced with his mother, and the scene is so agonizing. She may not be his birth mother, but it’s obvious that she was dear to Luo Binghe and her death had a significant impact on him. The humiliation he faced at the bullies’ hands is another facet that seems to tear Luo Binghe’s mind control apart. So much so that he doesn’t pay any attention to Shen Yuan’s constant warnings. His repeated attempts to attack the illusions are now more prone to shatter his soul.

At last, with no other option left, Shen Yuan blocks Luo Binghe’s last attack, and finally, the illusion is broken. Luo Binghe might have lost his mind for that short timeframe, but the look of horror on his face shows how much Shen Yuan means to him. While he kept moving in circles randomly attacking the illusions, seeing his Shizun seems to have broken Nightmare’s hold on Binghe. Shen Yuan is currently the most important person in Luo Binghe’s life, and that’s why Yuan risks his own life to put an end to Binghe’s madness.

Shen Yuan’s input of “Why did I risk my life for the main character?” is a recurrent phase. This character is sometimes so ludicrous that I get bored of hearing this dialogue. I just hope that Shen Yuan understands and accepts his own feelings because his mind is still stuck in the storyline. He keeps replaying the turn of events in the novel and thinks that he is playing a fair game for the requisite points. But Shen Yuan fails to understand his own developing feelings for Luo Binghe and that he was evoking the same kind of emotions in Binghe’s heart. I really enjoy these quiet conversations that both of them have when they are lonely. Luo Binghe feels repentant, and Shen Yuan’s soft gaze speaks volumes about their love for each other.

Unfortunately, Nightmare notices the same because he pulls them back into a new illusion. He sends Shen Yuan into another dream within the current illusion, so Shen Yuan is rendered unconscious. Nightmare repeatedly provokes Luo Binghe and tries to instigate ill feelings in him against his Master. But this time, Luo Binghe pays heed to Shen Yuan’s previous warnings and maintains his calm. Nightmare finally shows his true self and instead attacks Luo Binghe’s mental state. Atypically, Binghe’s mental state has deserted, and his soul embodiment is similar to a tree.

When Nightmare gets closer to it, there is a flash of light, and Nightmare is thrown out of Binghe’s mental state. Of course, Binghe’s mental wards surprise Nightmare, who decides to trick Luo Binghe’s into becoming his disciple. He warns Luo Binghe about the seal on his demonic aura and tries to bargain. I’m surprised that Shen Qingqiu didn’t notice Luo Binghe’s dormant demonic aura, or didn’t he? Is that the reason why he continuously tortured Luo Binghe? How come Shen Yuan didn’t know about this particular characteristic?

Nightmare spins a pretty tale about wanting to help him remove the seal. I have my doubts about it because Demon Saintess Sha Hua Ling requested his help to recruit Luo Binghe’s into the Demon Clan. It seems that my doubts were pretty accurate because Luo Binghe clearly sees through to Nightmare’s true intentions. Nightmare requires a stable host to contain his soul, and it seems he has decided that Luo Binghe will be THAT host. Binghe declines the offer because he is more worried about his Master’s wishes than anything else. But Nightmare dangles Shen Yuan’s safety in front of Luo Binghe and quietly leaves with a pointed warning. I’m wondering whether Luo Binghe will agree to the deal and become Nightmare’s disciple.

If that happens, wouldn’t there be an inevitable face-off between Binghe and Shen Yuan? Will the same storyline repeat, and Binghe will turn into an Evil Demon Master? Will he really capture Shen Yuan and torture him in the same way as the future Luo Binghe did with Shen Qingqiu?

Keep watching this space as we bring further updates from this ongoing Donghua!