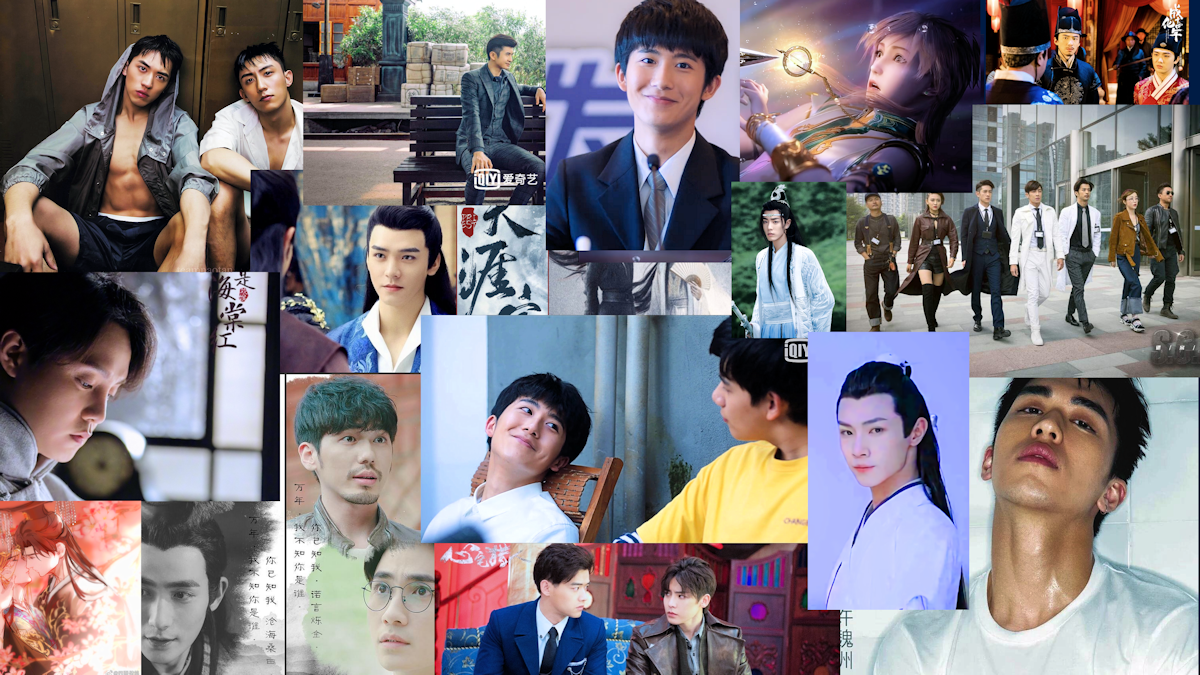 Recently a lot of (Mainland) Chinese dramas that are sourced from BL web novels were announced for 2021. [Here is a list of a few dramas that we wrote about on the site earlier.] Anyone who knows a bit about Guardian, The Untamed, Winter Begonia, or Sleuth of Ming Dynasty will also be aware of the BL sources for these Bromance dramas. Most of these works have no female lead as a love-interest, which in and of itself is very much indicative of the nature of the relationship between the male leads. So, it’s no surprise that most viewers felt that the female lead character of Bai You Ning, and the implied het romance-pairing with her was the weakest part of the show My Roommate is a Detective [I agree]. Personally, I had the same issue from Sleuth of Ming Dynasty. The female character, for whom one of the characters had an interest (albeit platonic), really dragged the show down for me in the middle.

Some of the novels are first adapted into voice dramas/donghua, where the resulting censorship is much less damaging to the overall storyline. Compared to the live adaptation of MDZS (The Untamed), the donghua version is closer to the source material. Perhaps that is why fans of TGCF enjoyed the donghua adaptation more so which, BTW, very recently completed its first season. However, live adaptations feel like completely different shows sometimes for various reasons. The first and the most objectionable act of rank censorship is the change in the relationship between the leads – from being lovers to being friends (soulmates/ partners/ colleagues), and strips the narrative of the natural intensity as the novel. This relationship is the primary element of these stories and is what earns its genre classification as a “BL Novel.”

Many stories are also enjoyable to read, not necessarily just because of the romance, but also the tension, awkwardness, unrequited longing, and the character’s confession scenes. The number of times Lan WangJi broke Gusu Lan Sect’s rules for Wei WuXian and the ways in which he broke them have Love written throughout. It was both saddening and hilarious to find that in the live drama these two could not be open about their feelings for each other for the entire series derived from a novel that has over 125 chapters long in its original form. [BTW, all the ‘extras’ definitely make up for the lack of romance, intimacy, and sex missing in the other 100 chapters. These chapters are affectionately referred to as the “smut chapters.”] The web’s best translation is right here.

So while it’s not always the primary central theme for the web novels picked for adaptation, I do feel that changing the central relationship does have an adverse effect on the story in noticeable ways including even changing the sex of one of the main characters. However, these days most savvy viewers make themselves fully aware of the original source material, whether they have read the novel or just participated in Social Media. These efforts help us discern the actual feelings of the leads for each other more accurately one way or another.

Some might see it as ‘more than friends’; some might be confused with the relationship equation and so on. Under the constant threat of Chinese censorship, it depends a lot on the casting, how the scriptwriters write, the director’s instructions, and above all, the actors’ skill in bringing those aspects out as strongly but yet as subtly as possible.  All serving to adapt the drama as being closer to the source, albeit surreptitiously. However, for me, it can be a hit or miss anytime.

Another concern raised by many fans of web novels is the length of the dramas. Consider the drama adaptation rumored for the novel – Seizing Dreams or Sa Ye. Most readers fear that the story is far too complicated to be shown in a just 36-episode drama. “The Untamed” had FIFTY episodes, and yet the opening episodes still needed either some context, or most viewers had to re-watch episodes after reading the novel to have a fuller appreciation of the reunion scene between the lead characters.

When I watched Guardian, many fans told me that the ending is changed from the book, and it was a little letdown. [Spoiler: I initially thought it was disappointing because the leads die, and Oh Boy! Was I wrong!] The letdown is an understatement! The plot of the novel is so complex and almost flawless in its reveal. Bringing something so complex to the screen with (only) a 40-episode drama is a practically impossible task. I am a big fan of this drama because the leads did an amazing job at being so flirty, so fun, so intense in their own ways. However, I firmly believe that the novel is a far better telling of events in many more ways.

This being said, let’s not forget the Chinese Government’s rank and cowardly censorship on BL shows, neutering them to just Bromance. All this, after the pioneering Chinese BL Addicted, tried to be true to the source and was pulled off air abruptly. Producers took three years to come out with a BL inspired novel, passed off as Bromance story in the form of Guardian. Then The Untamed came out close to it, and a year later, we’ve had a lot more shows that are tagged Bromance in MDL. The way things appear right now, those numbers might double in 2021, and it worries me. If ever the Chinese Government suddenly decides that these dramas should not be aired, God help the production houses.

As much as all these casting and drama announcements still excite me, the reader in me really worries about the complications that arise from these story adaptations. Having said this, I do see some merit in this trend, and that is to bring these web novels out of obscurity into the bright and revealing light of The International Audience. I fervently hope that the authors and the original publishers make money when the novel is picked up and are inspired to write more such stories because, trust me, these folks are brilliant! I loved reading some of the web novels last year, and I already have added almost every BL novel picked for adaptation for me to read at sometime – whether before or after the drama adaptation airs.

It thrills me that these great stories find audiences far and wide because of the sheer publicity from the drama news – A silver lining, perhaps. I sincerely hope that readers and fandom for the books will be less critical and forgiving of the drama adaptations when they come out and just let the non-readers enjoy the drama on its merits (and if so, the demerits).