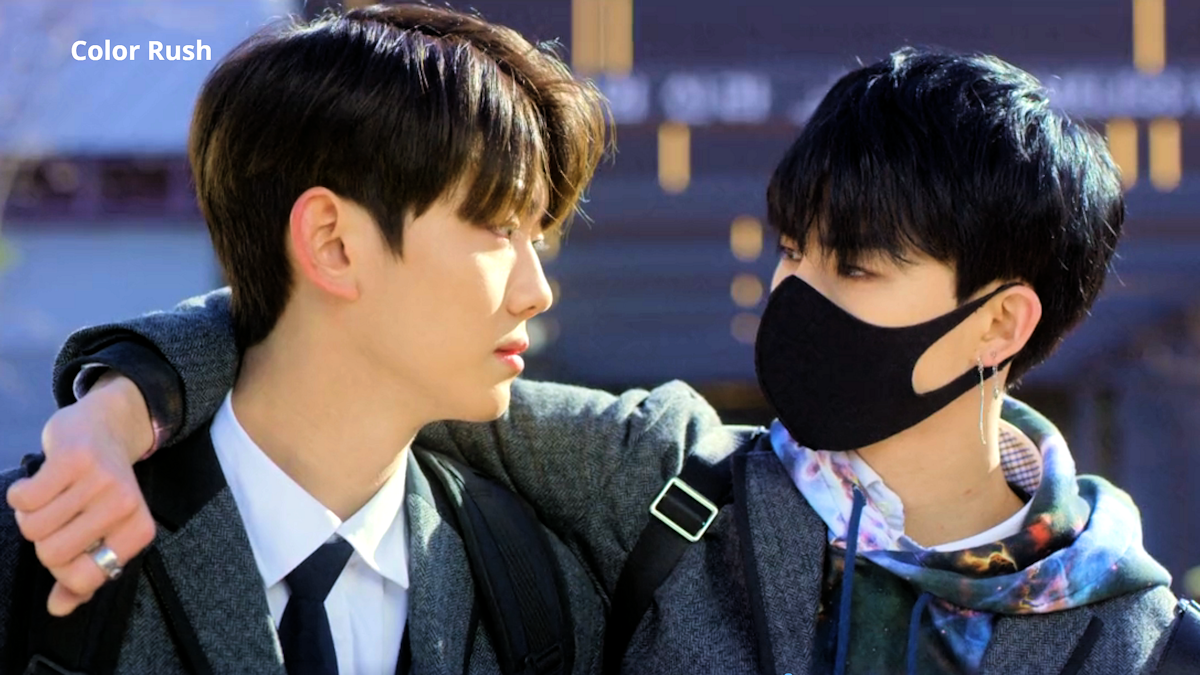 There is always light inside the darkness. That’s the kind of story Color Rush offers us. It never felt like this drama was trying to tell a love story, although Yeon Woo and Yoo Han’s gives us is undoubtedly a beautiful one. It never feels like this drama was trying to hype the BL genre of which it is a part. Instead, Color Rush tells a story about searching for color in a dreary world.

When I first started Color Rush, I never expected to fall in love with it quite the way I did. The first few episodes set up a unique storyline that draws the viewer inward. However, knowing this is Hur Hyunjun’s (Yoo Han) acting debut left me a little nervous about the delivery.

I was wrong to doubt it.

What sets Color Rush apart is the unique way it tells its story. Rather than focusing on romance, it focuses on character. Most notably, Yeon Woo. For those who haven’t read my initial review of this drama, Yeon Woo (portrayed by Yoo Jun) is a Mono. Monos suffer from neurological color blindness. Not color blindness as we have come to know in today’s world, but where the view is made up strictly of luminance – no chroma or color. Monos see only shades of gray, black, and white. The only way Monos can see color is if they come into contact with their Probe. Probes are soulmates who bring color into their Monos’ lives, often sparking a dangerous behavior or obsession. The first time Yeon Woo locks eyes with his Probe Yoo Han (portrayed by Hur Hyunjun), he experiences a “color rush” that changes his life.

In the grand scheme of things, the color soulmate theme isn’t a new concept in BL fiction, and the drama’s episodes are easily summarized in a few sentences.

That’s it. That’s the story.

So, what makes this drama so special? It’s the character connection. Color Rush tells us a story about searching for light inside the darkness. By emphasizing Yeon Woo’s desire to see color and Yoo Han’s desire to see faces, it built a psychological connection between the two lead characters that reached out to the viewers. Aren’t we all looking for the same thing? Aren’t we all searching for that one thing in our lives that makes everything else worth it? Whether it’s a passion for someone or something, we spend our lives focused on whatever it is that brings color into our existence. In Color Rush, mentally connecting with someone and then desperately trying to understand the other person is the start of the greatest kind of love story.

Yeon Woo found his light inside the darkness with Yoo Han, while Yeon Woo’s darkness fascinated Yoo Han. Later, we discover that Yoo Han also suffers from a neurological illness that prevents him from distinguishing faces. Yeon Woo’s face is the exception. Together, they stumble through a world of light and dark. Watching it felt like being inside a pitch-black room with a blinking strobe light

While I think this drama gave us a world only Monos and Probes are supposed to understand, a unique bubble that separates them from everyone else, this world called to me. The desperation, need, and even obsessiveness conveyed by this narrative took my heart into its hands and squeezed it. I connected with these feelings more than I did the romance. That’s what sets this drama apart. While romance happens to bloom from these other feelings, it isn’t the core reason these two connect.

Then the show one-ups itself. I’m not sure if this was the writer’s intention or because I personally suffer from an eye condition slowly blinding me, but Color Rush gave me a sense of touch that felt symbolic compared to other dramas. It draws from its “color/face-blindness” and “light in darkness” theme with Yoo Han’s need to touch Yeon Woo. It integrates how vital touch is to the blind, how important it is to stroke and feel someone’s physicality, and to read their emotions with the hands as much as the eyes. It stressed how important it is to build a connection with someone just by physically reaching out to them. Yoo Han became Yeon Woo’s lifeline. Yeon Woo became the one person Yoo Han could distinguish from anyone else.

By doing this, Color Rush creates chemistry and need between the two lead characters that might not be there if this had been another drama or if this had been trying to tell a different story. This type of connection was vital to what came next: The need to protect each other.

How often do we feel the need to disappear because we fear hurting the people closest to us? Yeon Woo epitomizes this. It’s easy to share your light with someone. It’s not that easy to share your darkness, especially if you fear the darkness will eat the other person alive. The moment Yeon Woo decided to take himself out of the picture by attempting to end his life, I knew he’d fallen in love with Yoo Han. He wanted to protect Yoo Han from the homicidal obsession most Monos develop toward their Probes.

I want to know about the grey world you live in.

As for Yoo Han, I knew he’d fallen in love with Yeon Woo the moment he asked to be invited into Yeon Woo’s greyscale world. This need captured my heart, and from the way Yeon Woo reacted to it, it also captured his.

I fell in love with Color Rush‘s search for the light inside a dark world, and by the time the last episode ended, I had also fallen in love with the romance that developed through this search.

However, such praise does not blind me to the show’s shortcomings. My only real complaint is that even after the end of Episode 8, the story feels incomplete. Now that they’ve begun a journey together, now that they’ve invited each other into the light and the dark, and now that I’ve become invested in the love that grew from this, I need more. There were a few things the show didn’t delve into that left me unsated.

What is it about Yoo Han’s face blindness and his family life that made him connect with Yeon Woo’s darkness? At first, I loved how mysterious Yoo Han was. It created a sense of suspense and even had me wondering at one point if it was Yoo Han’s obsessiveness and not Yeon Woo’s that we needed to be concerned with. Yoo Han was a puzzle I loved not knowing about, but then suddenly the show was over. By not delving into his family or his experiences with face blindness, he became a puzzle piece that never got placed correctly into the bigger picture. I’m sad that we didn’t get to see the struggles he faced with his blindness as closely as we did with Yeon Woo’s.

I need to know what happened to Yeon Woo’s Mono mother. Much of Yeon Woo’s depression and opinion of himself centers on his mother’s heartbreaking disappearance. Color Rush built a mystery around how she vanished, and Yeon Woo’s aunt dedicates all of her spare time to searching for her. However, in the end, there is no resolution. Her disappearance became something we knew happened but never found out why, what, where, or how.

I need to see Yeon Woo and Yoo Han work through their separate “blindness” issues. Many of their mutual feelings grew from the fact that they are “remedies” for each other’s illnesses. With Yoo Han, Yeon Woo can see color. With Yeon Woo, Yoo Han can see a face. Where is the line drawn between the needs they have for each other and the love that develops? I want to watch them work through how their conditions affect their mutual feelings. I need to know how Yeon Woo and Yoo Han tackle the darkness together in their journey towards the light. There was a lot of focus on how dangerous Monos are to their Probes, making this ending together feel too simple and trite.

Color Rush is a brilliantly filmed, symbolic drama that touches me personally. The drama’s story made up for any rookie acting mistakes, but I wish we’d gotten a better resolution. The ending felt too easy compared to the struggles and fears they took us through every week. Although there is a director’s cut of this drama releasing soon, I feel like Color Rush needs a second season to delve deeper into Yoo Han’s character and resolve the mystery surrounding Yeon Woo’s mother’s disappearance.

I highly recommend Color Rush, but please give us a second season.