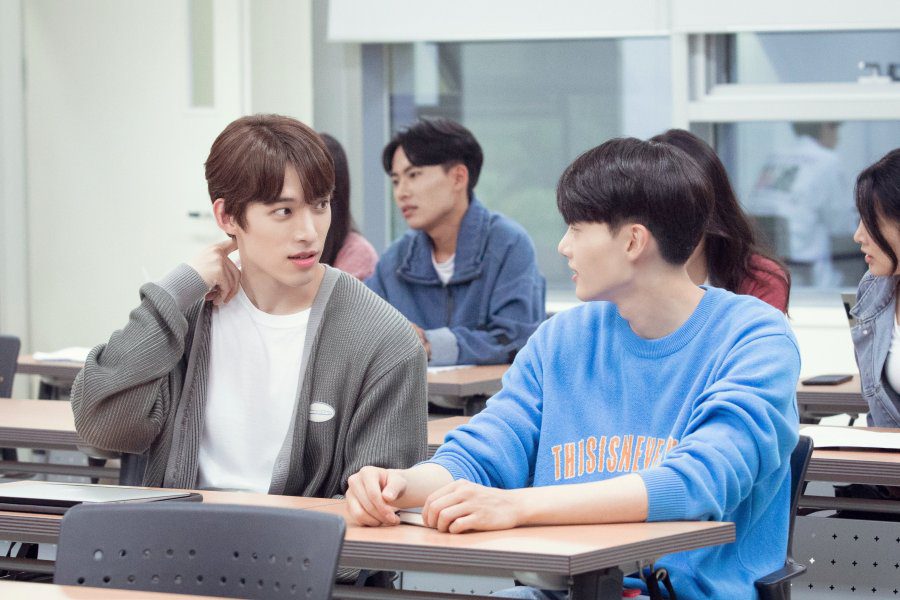 To say that South Korean BL drama Blueming 블루밍 took the BL world by storm is an understatement. That is, for the most part of the BL universe. While some other parts took it for granted. Word of mouth about the excellent production pave the way for an almost ‘universal’ acclaim of the said series. Was it good? It was great! Better than some of 2022 offerings, to say quite frankly.

This full review and impressions center on the acting, production values and overall appeal of the BL series, which is divided into eleven 20-minute segments. Did I mention it has an awesome soundtrack as well?

The South Korean BL drama “Blueming” is adapted from Kenaz Comics’ popular manhwa “Who Can Define Popularity?” It focuses on young Cha Siwon (Kang Eun Bin), who managed his life quite well with the intent of gaining unanimous popularity. He met Hyeong Da Un (Jo Hyuk Joon), who was born with an aura that attracts popularity, causing Siwon’s popularity to slide. What happens afterward is both surprising and unexpected. From rivals, their relationship becomes intimate to the point that both their worlds revolve around each other.

Watch trailer#2 below. It reveals quite a lot of the most memorable scenes of the series! Notice the on-screen chemistry of the actors!

This drama is directed by Hwang Dasol (“Where Your Eyes Linger,” “To My Star”). Having said that, Dasol must be credited for empowering her inexperienced lead actors with the right amount of motivation and energy. The chemistry between Jo Hyuk Joon (who plays the rich but lonely kid Da Woon) and Kang Eun Bin (the insecure and highly strung pretender Siwon) is palpable as it is endearing. There is just the right amount of emotional attachment between the two of them – they act so naturally together that I was surprised to learn that it’s their first drama series (and a BL at that!). While Thai and Taiwanese BL actors start young, Koreans follow their Japanese counterparts by casting older yet youthful-looking guys. Hyuk Joon is 32 years old, while Eun Bin is 25. Yet, their age is hardly noticeable. What is quite impressive is for both to act as young University students with complete believability and honesty.

Kang Eun Bin, playing Siwon, is the dark-haired pretender who has a past he wants to bury. He was an overweight kid often bullied and ridiculed by his cruel kids in the neighborhood. His sister motivated him to transform himself into a skinny, handsome teen. Thus he has a strict regimen to maintain his good looks and admirable physique. He loves attention, especially at school. Eun Bin attacks his character with a noticeable sense of humor and intensity. Jo Hyuk Joon plays the confident Da Woon, with a signature poker face, yet deep inside, he suffers from loneliness. There were several intimate scenes between our model-actor pair, and they were more than highlights of the show. The OST proved effective, elevating these scenes into the BL stratosphere. I must say, a second season is warranted, just to watch these two actors once more.

Veteran BL watchers like me are often used to poorly executed and primitive production values. However, the South Koreans have to be credited for bringing world-class production sense into the BL scene. The editing is impeccable, as the lighting and effects inside and outside. Did I already mention the soundtrack? The series stylist(s) should be commended for the amazing University fashion in and around the campus (was it Uniqlo inspired?). I love how our lead actors were dressed (in both summer and winter clothes), highlighting their intimacy.

I highly recommend this series. The acting is believable as both actors successfully settle into their characters. The story is not even ‘toxic’ to begin with. While it tackles personal issues such as loneliness, bullying, and difficult familial relationships, the treatment is light bordering on humor. Typical KDrama, some might say, yet it has a look and feel all its own. Worth more than just a one-time watch. In fact, as I write this review, I’m going to be watching it again.