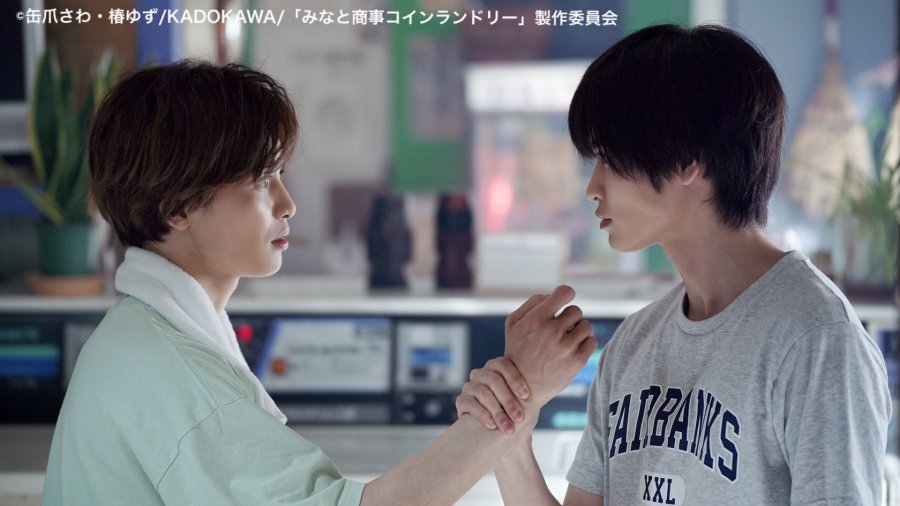 Charming, with little pretense, this is one of Japan’s latest BL offerings for 2022. Minato’s Laundromat follows a long list of Japanese slice-of-life dramas with a BL slant. I’m particularly curious about the casting of Nishigaki Sho – who resembled a bit of Yamazaki Kento (a favorite Japanese actor) – but has his own on-screen and personal aura.

“I want to grow up quicker, so I can date Minato-san,” says Shintaro.

Minato Akira inherited his grandfather’s coin laundry. And so, the barely-30 former corporate drone, Akira, peacefully runs the well-loved coin laundry. One day, a high-school student, Katsuki Shintaro, enters the coin laundry. Despite the difference in age, they quickly became friends. However, Shintaro suddenly finds out that Akira is gay. Adapted from the manga “Minato Shouji Coin Laundry” (みなと商事コインランドリー) by Tsubaki Yuzu (椿ゆず).

Kusakawa Takuya is an actor-model-dancer, managed by one of Japan’s most influential talent management companies, Stardust Promotions. He plays the title role of Minato. He has more than 30 drama series to his credit – including Ultraman and Fake Motion. Twenty-something looker Nishigaki Sho plays the younger Shintaro. He’s a relative newcomer with less than 10 dramas to his credit. This BL series is his first major role.