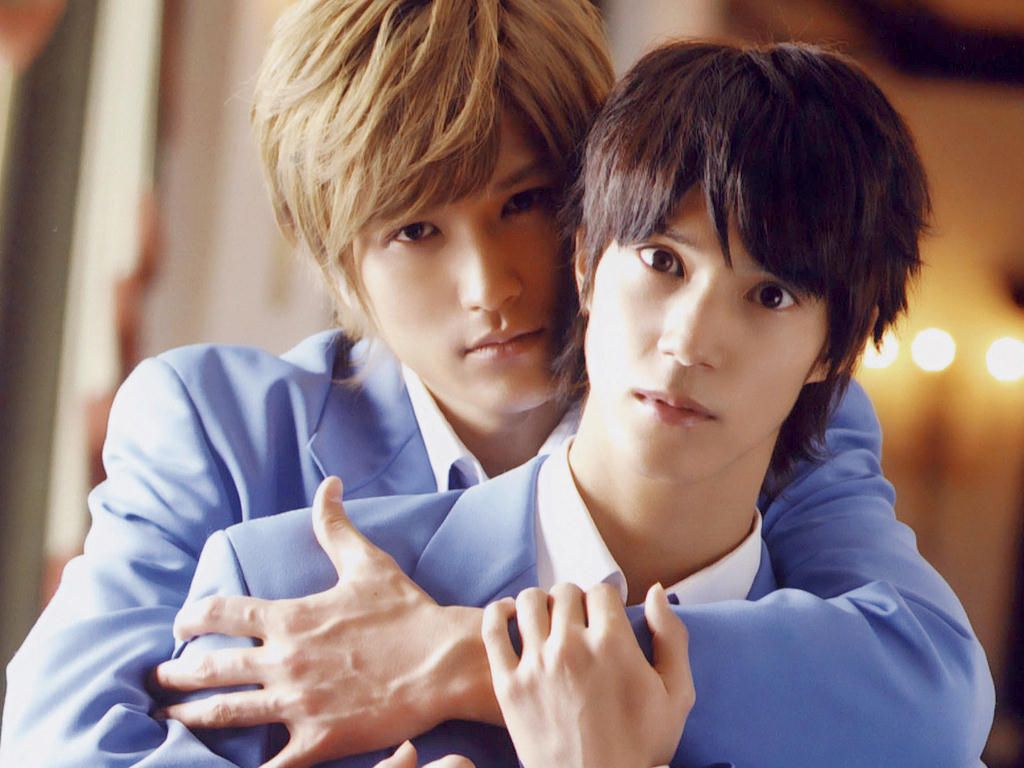 Directed by Takeshi Yokoi. This is the second installment of the Takumi-kun series. Now that Takumi and Gii are officially a couple, their relationship is now put to a test by the presence of a charming newcomer who seems to have caught Gii’s interest.

The very first thing that caught my attention was the intro of the movie. As soon as the camera panned to the moving blue skies over the trees, I knew right away that this was not going to be the same mood as the first movie. The mood was leaning more towards serious drama and zero comedic undertones. The opening monologue which would become a staple in the coming sequels and even establishing a standard movie theme felt like the film producers wanted to start from scratch. It definitely gave that impression as if you were about to watch a new movie. The fact that it was a different voice in the intro made me realize they have also changed the leading actor. Bringing in a new director, Takeshi Yokoi brought a much more different approach to the storytelling. My only peeve is that the camera was jerky and unbalanced throughout the movie.

As the film progresses, we can see that the three main characters namely Hayama Takumi, Saki Giichi and Izumi Takabayashi from the previous film are now portrayed by new actors with the exception of Akaike Syozo who is still played by Yukihiro Takiguchi. Aside from the new faces, the story also introduces another set of characters that were solely created for this movie.

The location for the fictional Shidou Gakuin is set in the idyllic British Hills which is an institute with a stylized medieval British town design which explains why the cinematography is so much different than that of the first Takumi-kun movie.

The new Takumi is portrayed by the actor Hamao Kyosuke. Of the main cast, he is the only one who is an actual teenager. His interpretation of the character is that of someone who is sensitive, wide-eyed, timid yet gentle nature with an underlying passive sensuality. The more you watch him, it feels more like watching Takumi as Hamao than the other way around. Hamao’s voice has a softer voice compared to that of the very boyish Tomo Yanagishita from the first movie. You are immediately drawn to him and will want to sympathize with the character. This is not to say that Tomo Yanagishita’s original take on Takumi is inferior to the way Hamao handles it. In fact, each brings a different perspective to Takumi whereby Tomo is the Takumi who is still very much suffering from the wounds of his past while Hamao is the Takumi who may appear not as troubled yet still is very much insecure in his relationship with Gii.

The new Gii is played by the gorgeous Daisuke Watanabe and in keeping with dramatic entrances, his would-be kissing Takumi’s lips in front of students which marks the beginning of more cinematic open kisses to follow in the next sequels. He seemed much closer to the ideal with the way the characterized him. Where Keisuke Kato’s portrayal of Gii is like that of a sweet boyish prince, Daisuke, on the other hand, is more like a gentleman prince. It would be very difficult not to fall in love with him right away. Again, this is not to say that Keisuke Kato’s portrayal of Gii was inferior but to me, he was more accessible. I did mention in my previous review that I admire the way he is humanized in the first movie especially how they appear as equals with the old Takumi. In this sequel, however, Daisuke Watanabe’s presence is not. The character is given more hype and reverence. We now come to understand what Takumi meant when he mentions during the intro about Gii, “he was of existence above the clouds.” Daisuke Watanabe displayed a more intimidating presence than that of Keisuke Kato who was far more accessible to the audience. Yet it is also because of this intimidating aura that also draws the audience closer to him because he reflects the fantasy more.

A new Izumi Takabayashi is introduced played by the charming Kei Hosogai. Personally, this is my most favorite portrayal of the character. It was truly a breath of fresh air after what I had to endure from Yasuka Saito’s overacting performance in the first movie. This new Takabayashi is much more subdued. He does not reflect that of a bratty princess and is fitting to be part of Gii’s posse. Although I must admit that his role is not as pronounced as the previous film, his presence is there to keep some sort of evenness in the main cast. If anything, Kei Hosogai’s role is to make sure that all the role of a friend did not rest entirely on Akaike’s shoulders.

It was such a pleasure to watch Yukihiro Takiguchi play the unflappable Syozo Akaike. He was the only actor from the first movie who got to reprise the same role he effectively portrayed establishing the fact that he is the most stable from the original cast members. I admire Takiguchi’s consistency as Akaike. He is not in this movie to make Gii’s appearance cooler because that duty rests on Takabayashi’s role already. Akaike is and will always remain to be independent and the voice of reason and clarity when everything around him gets a bit topsy turvy. Takiguchi totally owned the character and you cannot imagine anyone better to tackle the role better

When the character Suzuki Takeshi played by Yuta Takahashsi was introduced during the initial part of the movie, it made me wonder a bit if this was going to be a new love rival for Gii. His whole demeanor was nowhere near the realm of the pushiness of Daisuke Nozaki displayed from the previous film by Tetsuya Makita. For a while, I thought that Suzuki Takeshi would have some sort of unrequited affections for Takumi. This added mystery drew me closer to the movie. Yet my suspicions were immediately put to rest very early on and for that, I felt a great sense of relief.

Another character that intrigued me was Morita Toru played by the gentle Yuki Hiyori. I was completely smitten by his character and portrayal. He totally expressed the character so effectively. He had that timid quality but it was so much different than that of Takumi. Between the two of them, he was more assertive. It was through him I realized that he is the one whom Suzuki fell for.

The most poignant scene for me was when Gii reveals to Takumi the truth about why Suzuki had to leave school. That entire scene showed a side to Gii that was not revealed in the previous film and Daisuke did a really impressive performance in expressing utter vulnerability and sensitivity. You can feel the turmoil of what Gii is going through.

As previously mentioned, this sequel is very different from the first movie particularly with the way the love scene was done. It was much less choreographed and has a bit more realistic execution. Daisuke seems to be a little bit invested in this scene since he plays the dominant role although his kisses are much too chaste for a bed scene. His movements are deliberate and careful. As for Hamao, there is still a large degree of awkwardness and self-consciousness exhibited on his part. One could probably attribute it as being Hamao’s young age and first love scene he ever did for a movie and because of that, he is still holding back a lot as he struggles to respond to Daisuke’s actions. He remained tight-lipped to all of Daisuke’s kisses. Despite its lack of intensity and passion, this love scene was still necessary for the movie if only to show Gii’s desperation for comfort and loneliness. Hamao exposed a certain virginal sensuality on screen as it matches with Daisuke’s dominance.

For me, the real romantic scenes were from Morita and Suzuki. The way the camera reflected on his mesmerizing gaze as he watched Morita walk across the hallway. The contented look on Morita’s face basking in the warm sunlight while he sat and watched the lights reflect through the window where Suzuki worked at his tasks. It came off as poetic, touching and inspiring. My only regret is that there were so few scenes of them actually together. Yet for what it lacked, it made up for their performance. They both complimented each other quite well. Yuta Takahashi’s seriousness brought out that romantic tragic hero. Yuki Hiyori was truly amazing as he showed a man who is very much in love. Towards the end of the movie the series of flashbacks of their scenes truly affected my senses. I love the fact that it managed to encapsulate the very core of their romance. The ending theme “The Otherside” by Nanafuretto was very fitting for the mood of the film.

In a nutshell, Nijiro no Garasu is really about the beautiful love story between Morita and Suzuki yet it is made out to be under the pretext of the romance of Gii and Takumi. This kind of storytelling can be a tiny bit distracting as it tries to veer the audience away from Morita and Suzuki and focus the attention towards Takumi’s bouts of insecurities towards Gii.

But this is tolerable to a certain extent as the story is still told from Takumi’s perspective. The characters Morita and Suzuki were specifically created for this movie to provide the emotional setting for each one to react to. How our heroes face the reality of one’s mortality and how destiny can bring people together despite the odds.

Although the movie gives the impression of being more like a reboot than a sequel with its major changes and all, it remained faithful to the very essence of the Takumi-kun story that celebrates youth, friendship, romance and coming to terms with life and loss.