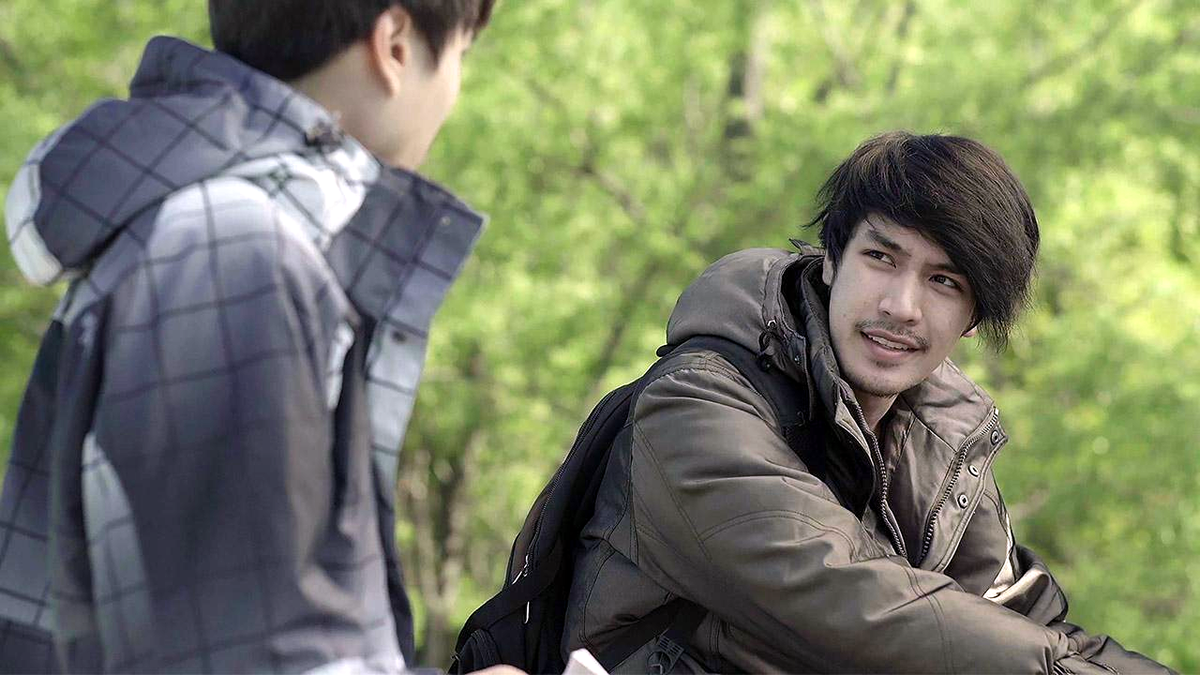 We’re in the middle of Pride month and we’re excited to launch our 50 favorite gay films of all time! Most of the list you have read (all over the net) maybe ‘exclusively’ Western productions (or European, mostly British), yet Asian gay films are as engaging and as exciting as well. While we pay tribute to such greats like Philadelphia, My Beautiful Laundrette, Brokeback Mountain, My Own Private Idaho, and Call Me By Your Name, we are listing many excellent Asian gay movies as well – among them Gohatto, A Touch of Fever, Happy Together, Present Perfect (and its sequel), Lan Yu, and many more!

Why don’t you take a look! There maybe some you haven’t seen before!

When Romain (Melvil Poupaud), a vain young photographer, is diagnosed with a virtually inoperable brain tumor, he refuses treatment and tells no one of the prognosis. Romain recoils from his partner, Sasha (Christian Sengewald), but confides in his worldly grandmother, Laura (Jeanne Moreau), who encourages him to re-examine himself before he departs the world of the living. Soon Romain meets Jany (Valeria Bruni-Tedeschi), a waitress who offers him a surprising opportunity to die meaningfully. The New York Times’ A.O. Scott reviews the film and says:

We are aware, throughout, that Romain is fundamentally alone, a state he seems to find both terrifying and calming. Occasionally, in memory and in fantasy, he comes face to face with his childhood self, encounters that make him appear a stranger to himself, rather than providing any kind of resolution or understanding. “Time to Leave,” in the end, explains very little, choosing instead to emphasize the essential paradox that an individual’s life is never complete and always over too soon. |source|

Prolific French filmmaker Francois Ozon aims to have no sentimentality at all, nor does he wants tears, yet the film becomes more powerful and emotional because it brings forth certain issues that define us as humans and how we respond. Death, after all, is a lonely and mysterious journey. This French film is not for everyone. The main character (played so convincingly by Melvil Poupaud) is often heartless and rude. But despite his flaws, he wants to leave his personal legacy by continuing his lineage – even if from strangers.

The first 10 on the list are critically acclaimed films produced from all over. (based on the photos, from the top, left)

During a street fight, Omar (Gordon Warnecke) bumps into his former lover Johnny (Daniel Day-Lewis). The two rekindle the romance between them and manage Omar’s uncle’s launderette, but various social issues stand in their way of success. Directed by Stephen Frears, it stars a young Day-Lewis, before he went on to grab three Best Actor trophies at the Oscars.

A Film about life in a samurai compound where young warriors are trained in sword-fighting: several interpersonal conflicts are brewing in the training room, all centering around a handsome young samurai named Sozaburo Kano (Ryuhei Matsuda). The school’s stern master can choose to intervene, or to let Kano decide his own path. Gohatto (aka Taboo) is the much-awaited movie from award-winning filmmaker Nagisa Oshima, who won the Best Director at Cannes (for Empire of Passion). He personally picked Matsuda (then only 17) to play the role of the young samurai.

Beijing, 1988. On the cusp of middle age, Chen Handong (Hu Jun) has known little but success all his life. The eldest son of a senior government bureaucrat, he heads a fast-growing trading company and plays as hard as he works. Few know that Handong’s tastes run more to boys than girls. Chen develops a relationship with a young boy named Lan Yu (Ye Liu) that goes farther than he ever wanted. Directed by Stanley Kwan, it’s based on a novel anonymously published on the internet. It was filmed without government approval since it depicts an explicit homosexual relationship, which is being frowned upon by the Chinese government, even until now.

Ennis del Mar (Heath Ledger) and Jack Twist (Jake Gyllenhaal) are two shepherds who develop a sexual and emotional relationship. Their relationship becomes complicated when both of them get married to their respective girlfriends. Brokeback Mountain has been regarded as a stepping stone for the advancement of queer cinema into the mainstream in America. The film is directed by Ang Lee, who also did The Wedding Banquet, and is part of this hitlist.

In an unknown future, Jun (Ryuhei Matsuda) confesses to the murder of another boy, Shiro (Masanobu Adno) at an all-boy juvenile detention facility. The story follows two detectives trying to uncover the case through interviews and intersperses testimonies by the inmates and the prison employees with events in the lives of Jun and Shiro. Jun, who is incarcerated for the murder of his rapist, forms an intensely close bond with Shiro, who is in prison for a murder and the rape of a woman. Shiro protects Jun with fanatical intensity and violence from the other boys, though his intentions toward Jun are not clear. The highly symbolic visuals and dialogue contrast with the routine nature of the police investigation, creating a somewhat surreal commentary on the nature of violence and salvation throughout the film. This film is directed by Takashi Miike. Tom Mes at Midnight Eye considered the film as Miike’s most meditative films ever. Mes continues:

Yes, but is it any good? This is a Takashi Miike film. It will make you wonder, curse, marvel, tremble, scratch your head, grow bored, and awaken rudely. Celebrate it.

Mysterious Skin tells the story of two pre-adolescent boys who both experienced a strange event as children, and how it affects their lives in different ways into their young adulthood. One boy becomes a reckless, sexually adventurous male prostitute, while the other retreats into a reclusive fantasy of alien abduction. Mysterious Skin is one of Joseph Gordon-Levitt’s acting vehicles that catapulted him into dramatic actor status.

It’s the summer of 1983, and precocious 17-year-old Elio Perlman (Timothée Chalamet) is spending the days with his family at their 17th-century villa in Lombardy, Italy. He soon meets Oliver (Armie Hammer), a handsome doctoral student who’s working as an intern for Elio’s father. Amid the sun-drenched splendor of their surroundings, Elio and Oliver discover the heady beauty of awakening desire over the course of a summer that will alter their lives forever. Because of this film, Chalamet became the youngest Best Actor nominee for the Oscars.

Gustav von Aschenbach (Dirk Bogarde), a composer, travels to Venice for health reasons. There, he becomes obsessed with the stunning beauty of an adolescent Polish boy named Tadzio (Björn Andrésen), who is staying with his family at the same Grand Hôtel des Bains on the Lido as Aschenbach.

Film historian Lawrence J. Quirk wrote, in his study, The Great Romantic Films (1974), “Some shots of Björn Andrésen, the Tadzio of the film, could be extracted from the frame and hung on the walls of the Louvre or the Vatican in Rome.” He says Andrésen did not represent just a pretty youngster as an object of perverted lust, but that novelist Mann and director-screenwriter Visconti intended him as a symbol of beauty in the realm of Michelangelo’s David or Da Vinci’s Mona Lisa, the beauty that moved Dante to “…seek ultimate aesthetic catharsis in the distant figure of Beatrice.”

A young Philadelphia lawyer who is infected with AIDS keeps his homosexuality hidden from his employers. When he is suddenly fired, he hires a homophobic lawyer for a wrongful dismissal suit. Holly Millea at the Smithsonian wrote a piece about how urgent the film needs to be done during those crucial times:

Philadelphia was the first major studio film to face the AIDS crisis head-on. Though the industry had lost countless people to AIDS—most famously, Rock Hudson in 1985—there was tremendous reluctance to make a movie about the epidemic, especially one focused on those hardest hit: the gay community. (Jonathan) Demme and his producing partner Ed Saxon had both just won Oscars for The Silence of the Lambs and were in a position to take a creative risk. Both were personally inspired to center their next big project on the subject—Demme by the Spanish illustrator Juan Suárez Botas, a close friend who had been diagnosed with AIDS, and Saxon in tribute to his friend Robert Breslo, a writer who was suffering from the disease.

Philadelphia is perhaps one of the best examples of pushing a cause to move forward. What would have happened if movies about AIDS were not made during those crucial times?

Note that this is a 5-page article. Please see below for the link to the rest of the pages.