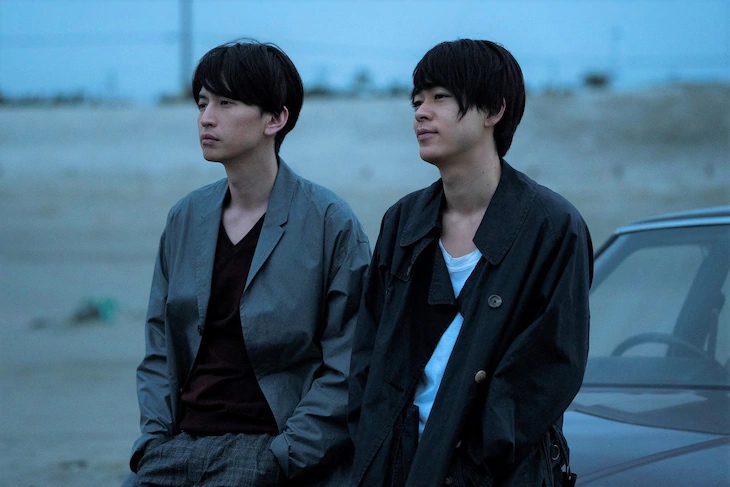 This is probably one of the best news to ever come out from Japan and from a BL perspective. Critically-acclaimed filmmaker Isao Yukisada is set to feature his 27th film entitled The Cornered Mouse Dream of Cheese. Aside from having an awesome director, it stars Ryo Narita – one of Japan’s most exciting young actors who was a former fashion model. He then auditioned and grabbed drama series and films since 2015.

Here’s the storyline, and quite a refreshing departure from school BL!

When Otomo Kyoichi (Tadayoshi Okura)’s wife starts to suspect that her husband is cheating on her, she hires a private eye, Imagase (Ryo Narita), to investigate him. However, not only does Imagase know Kyoichi from college, but he’s been nursing a crush on the man for years. Imagase gives Kyoichi an ultimatum: if Kyoichi wants to keep his cheating ways under wraps, then he has to give Imagase something in return. Imagase’s demands start with a kiss, but as the two men become entangled in each other’s lives, it soon becomes clear they each might want more than the other can give.

Playing opposite Narita’s Imagase is Johnny’s Entertainment Tadayoshi Okura. He is an active member of the idol group “Kanjani Eight”. In most Japanese movie casting, a production committee takes care of the many aspects of production – including the actors who will play the parts. Johnny’s Entertainment – which manages Japanese boy bands and idols – is one of the most active members of the said committee. They usually enter idols into films as complementary to their showbiz career. But Okura is not a newcomer to acting either. He has done more than 6 full-length films and about a dozen TV series.

“This will be a movie about accepting people.” With regard to the challenge of his new movie, he believes that the delicacy and sex appeal of the two men will make for an unprecedented movie. “I have made lots of love stories before, please look forward to a new form of love.”

“Honestly, I think it’s a pure love story. Of course, I was surprised. Nobody really understands the reason for falling in love.” “There are no boundaries for people to love other people, and I think it’d be nice if this movie can make you think of that.”

One must observe that the Japanese film industry (inclusive of their BL projects) are years ahead of the movie (and TV series) business in Thailand. The Japanese have a proven formula called the “production committee” that takes care of both technical and business aspects of movies and drama series. While there is criticism regarding the casting choice of certain actors and their qualifications, the status quo for Japan has been retained for years.

You may use one specific criterion on how much progress an actor has amassed through the years by the number of projects he did – movies or TV series.

Here is a backgrounder of the manga where the live-action adaptation is based:

The Cornered Mouse Dreams of Cheese is written and illustrated by Setona Mizushiro. It was serialized in the manga magazine Judy from 2005 to 2006. The chapters were later released in one bound volume by Shogakukan under the Judy Comics imprint.

The series was followed up with a one-volume sequel titled The Carp on the Chopping Block Jumps Twice (俎上の鯉は二度跳ねる, Sōjo no Koi wa Nido Haneru), which was published in Judy in 2006 and was later transferred to Mobile Flowers after Judy became defunct. To coincide with the bound volume release of The Carp on the Chopping Block Jumps Twice, The Cornered Mouse Dreams of Cheese was re-released on May 8, 2009, with a new, illustrated cover and under the Flower Comics Alpha imprint after the Judy Comics imprint became defunct. A drama CD adaptation was released on February 27, 2008.

Reprintings of The Cornered Mouse Dreams of Cheese and The Carp on the Chopping Block Jumps Twice removed explicit content beginning January 28, 2020, in order to appeal to a younger demographic with the release of the 2020 live-action film adaptation. The cover of the volumes will remain the same, making them indistinguishable from previous printings. Edited versions of the first and bonus chapters of The Cornered Mouse Dreams of Cheese, “Kissing Gourami” and “Hummingbird Rhapsody”, were reprinted in the March 2020 issue of Flowers. An omnibus volume of the edited versions will be released on April 10, 2020.

In January 2019, Seven Seas Entertainment announced that they were distributing both books in English.

We’ll update this page as soon as we get more information.