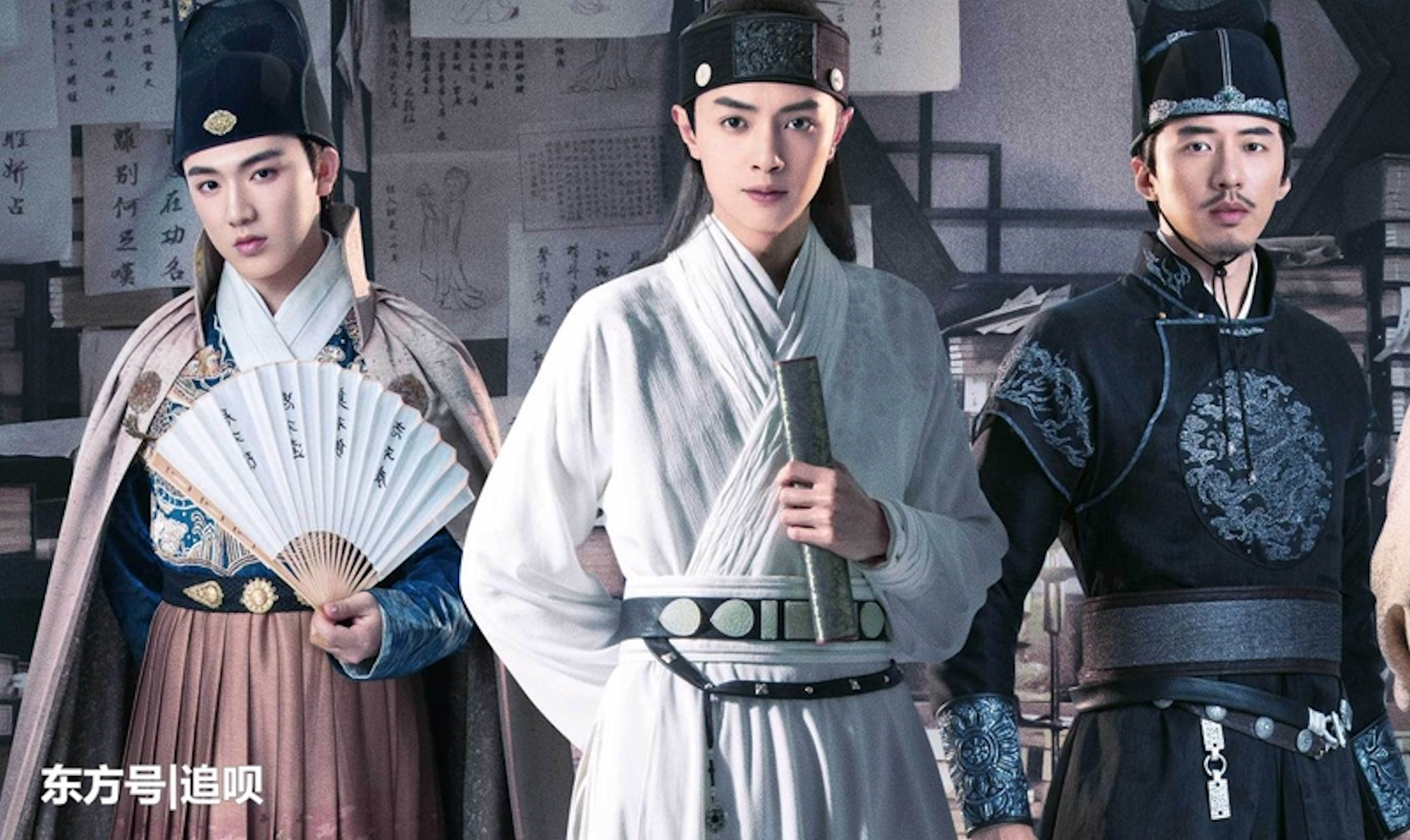 The Sleuth of Ming Dynasty 明代侦探|iQIYI (2020)

The Sleuth of Ming Dynasty is the latest entrant in the long list of BL romances that are designated as “Bromance” due to the strict regulations set up by the Chinese Government. The drama is based on the novel of the same name by the famous author, Meng Xishi. Set during the 14th year of Chenghua Emperor’s reign, the storyline follows the journeys of Tang Fan, a sixth rank official (Magistrate) played by Darren Shen, and Sui Zhou, an embroidered uniform guard, played by Fu Meng Po. They both join forces to crush a conspiracy to maintain peace and order for the people.

Tang Fan first meets Sui Zhou while he is trying to solve the case involving the Marquis’s son, and Zhou is trying to find the Crown Prince’s missing companion. At first, Sui Zhou suspects Tang Fan but soon realizes his mistake, and both work together to unearth the mysterious circumstances surrounding both the cases. Solving the case brings them widespread fame, and they continue to investigate even more cases, forming a new kind of friendship as well as a bromance.

Things get complicated when Tang Fan travels to Henan to investigate the sudden disappearances of people near the tomb site of the late Northern Song Emperor. When the culprit is revealed, it seems that he is but a pawn in a much grander conspiracy. As major cases continue to plague the capital and the local offices, Tang Fan and Sui Zhou work hard to unmask the mastermind who is pulling strings in the background.

Sui Zhou, played by Fu MengPo, is an embroidered uniform guard of Jinyiwei with 50 soldiers under his command. He is a highly skilled warrior and exceptionally brilliant in martial arts. He is often sent on secret missions and is entirely trustworthy. At first though suspicious of Tang Fan’s nature, Zhou later takes on the role of his protector.

Wang Zhi, played by Liu Yao Yuan, is the Commander of Western Depot. He is a eunuch, and as much as I know of Chinese history, eunuchs were mostly employed as Royal Attendants. For someone of his stature to rise to the position of the Commander is unexpected. Zhi is cruel in his methods of questioning and quite ruthless. But at the same time, he is extremely loyal to the reigning Queen as well as respectful to the Emperor. He would kill anyone who threatened them. This character is mysterious and a significant player in the trials faced by our main leads.

Digging For Romance in a “Bromance” Drama

Never let it be said that we didn’t try. This drama is a comic thriller and is strictly categorized as Bromance. The show is based on a novel featuring gay characters and has overt depictions of love scenes between the main leads. However, the producers are following the Chinese Government’s restrictive accord, and the main leads relationship is limited to being mere friendship. Quite disappointing, because Darren and Fu MengPo certainly have the chemistry to be an excellent BL couple. Both of them are good friends and are often seen updating their IG’s with each other’s pictures.

The combination of Tang Fan and Sui Zhou is somewhat similar to that of a Hollywood Buddy/Action movie. The journey starts with an intense dislike and mistrust for each other, progressing to mutual respect, and then to adoration.

Sui Zhou’s efforts to protect the “Fragile” Tang Fan can be seen in this scene where he forbids Tang Fan to follow him to the Iron Market, a command that Fan ignores. In between fighting the Oriads and trying to protect his fragile man, Zhou has his hands full.

In this particular scene, Tang gets pretty jealous when the female owner of the restaurant flirts with Sui Zhou by helping to cool his soup. Tang cools his own bowl of soup in the same way and gets up from his seat to offer it to Sui, even repeating the owner’s words in the same monotone but albeit full of jealousy.

They also take on the roles of “Tenant and Landlord,” where Tang keeps finding reasons to flirt with Sui Zhou, making him flustered, followed by playing the roles of “Diner and Exclusive Chef” as well. Sui Zhou cooks for the ever glutinous Tang Fan. Their affection is obvious stemming from being in close quarters with each other while solving difficult cases. So much so, that Tang Fan grows despondent when Sui Zhou leaves for his missions alone.

The drama plays off of the heightened tension and mystery while our two “frenemies” sleuth their way through the work against the Resident Evil. I’m enjoying the three distinctive yet varied characters along with the supporting cast. Some of the fans are already comparing Tang Fan and Sui Zhou’s chemistry to #WangXian from The Untamed drama series.

The man in the Director’s chair for this series is none other than the renowned martial arts stuntman, actor, and multi-talented personality, Jackie Chan. Although it’s his first time directing a web drama along with his foray into mainstream BL, he is putting his best foot forward to direct this majestic period drama.

Jackie Chan and his team are making sure that the clothing, makeup, and sets are as close as possible to the Chenghua Era and accurately depict the Ming Dynasty’s grandeur during its reign. He’s also stated that the stunt scenes are going to be realistic as that’s his forte, and as such, the action sequences though punctuated by humor, will have a marked difference. He has been personally mentoring the series actors and working with them, which is sure to make this drama a big success.

My Take On This Drama

The drama series is currently streaming on the iQIYI YouTube channel. The first four episodes are already out.

Let me caution you beforehand; if you are looking for a serious romance between the male leads, then you will be disappointed. However,  the drama scores high on the thrill levels, as well as the stunning costumes and mega setup. Although the show may seem to drag a bit in the premiere episode, it picks up speed and drives right on through the mystery at breakneck speeds.

Darren Chen’s performance as the lazy yet smart Magistrate will make you fall for his sweet charms. Fu MengPo is highly convincing as the skilled warrior Sui Zhou, and since his action sequences are choreographed by the master Chan himself, you can’t help but swoon.

Yao Yuan plays the deceptive Wang Zhi, who is unafraid of anyone except the Monarchs.  He loves to toy even with the Ministers on the council, and at times will make you question his convictions. I’m enjoying this series so far and looking forward to watching how this drama unfolds in the future.