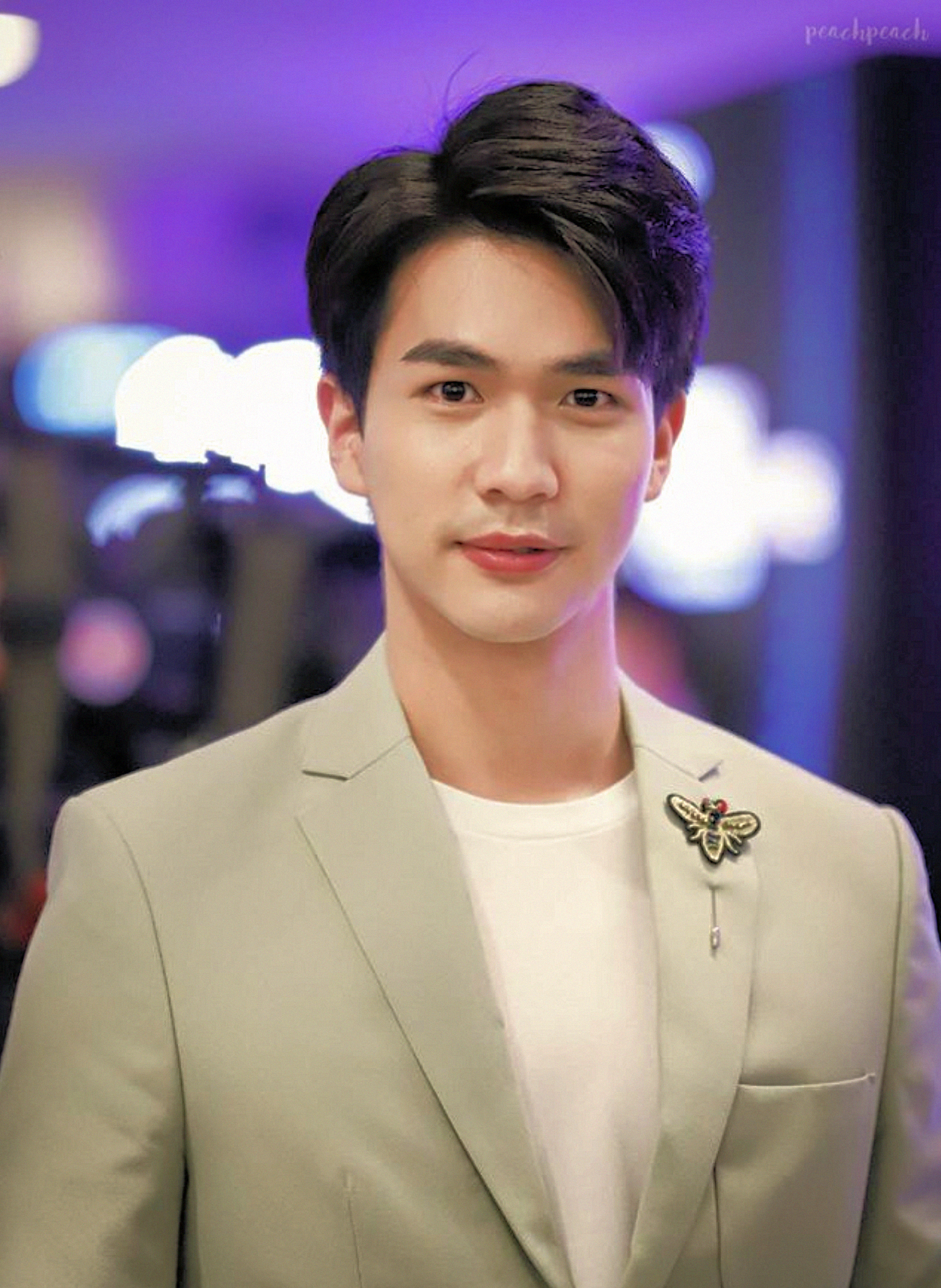 Dome Woranart Ratthanaphast (โดมวรนาถรัตนะพลาส), was born on April 11th, April, 1998, and is a Thai actor popular for his portrayal of “Beam” in the drama series 2Moons2.

Dome as An Actor

After Dome auditioned, he was selected by the series Dir. P’Am Anusorn for the role of Beam. However, there were some doubts and reservations. The issue was that his physique did not match the traditional role of a “uke.”  This was P’Aam’s way of shaking up the BL status quo a bit, and being a little more realistic. Also, when Dome was picked, he was going to play a character already made famous by Tee Tanapol Jarujittranon. Tee’s boyish charm made him a hit, so Dome had his work cut out for him. However, like all good actors, Dome turned the momentum in his favor, bringing the character of “Beam” to life with an endearing performance.

The scenes where Beam tries to express his “real” feelings for his best friend Kit, to help Kit stave off advances from Ming, are sincere and heartfelt. Small nuances with Beam’s confusion and heartbreak are readily apparent. The same confusion Beam is experiencing leads to the one-night-stand with his romantic interest, Forth (performed here by Pavel Phoom).

Up to this point in life, Beam had always identified his sexuality as being on the straight side of the spectrum. So the underlying mixed-feelings he has, first with Kit and then the intimacy with Forth, makes him feel despondent.

It is not easy performing a character who is at a constant internal battle with his feelings and emotions. Nonetheless, Dome convincingly pulled off his role Beam’s steadfast refusal to give Forth any second chances. Beam cares and worries about Forth, but his stubbornness could cost him the love he deserves and truly wants.

The anguish of ignored feelings continues until the 2Moons2 finale. Dome ensures his character Beam has a stronghold on his convictions, making sure never to let Beam betray his true feelings to Forth. In this particular scene, Beam’s carelessness unknowingly causes a hammer to fall and strike Forth in the head. This event serves as the catalyst for Beam’s true feelings to burst forward. The overwhelming guilt at Forth’s immediate injury combined with the caring feelings Beam has for Forth Beam has struggled to suppress, leads Beam ultimately, “accept” Forth as his boyfriend and delighting fans worldwide.

This outcome is what made the finale episode so special to audiences. Beam accepting Forth as his boyfriend and being forthcoming about his feelings was an emotional revelation for fans. #PavelDoMe did not disappoint. They are a complete package, their chemistry swings from hot and sensual to cute yet sweet.

The prior iteration of 2Moons didn’t place much emphasis on the relationship between Beam and Forth. Despite not having a reference for comparison, Dome infused each scene with his own demeanor and made a mark for himself.

His Chemistry With Pavel

Dome is calm like the ocean, while Pavel is crazy like the storm. It is reasonable to question how this equation works, as both are on the opposite sides of the tandem. But they make it work with lots of patience. Dome brings a kind of level-headedness to this partnership that balances with the frenzied Pavel Phoom.

In the initial days of promotions, it was often seen that Dome would tend to be shy.  Pavel’s flirtatiousness took precedence, and it took time for Dome to warm up to Pavel’s unprecedented energy. Eventually, he did, and now he is not the innocent he was before, which Pavel loves to point out repeatedly to their fans #PavelDoMe. Their constant and flirtatious banter on social media always causes uproar for which neither of them is the least apologetic.

They have refreshing chemistry – tart, and spicy, different from other BL couples. This stems from the mutual respect they have for each other, as they are also best friends who understand each other. Fans appreciate how comfortable they are in their own skin and also with each other. In an age where fans expect skinship from their favorite BL star, [skinship…the term is used to describe the act of intimate, non-sexual touching between very close individuals]  Pavel & Dome (#PavelDoMe) are neither hesitant nor shy. However, they never cross their own boundaries and are unbelievably sweet.

Dome has been dubbed as “Peachy” because Pavel is just crazy about smacking Dome’s butt at every possible chance. In their YouTube video, Pavel calls it “Ass of Thailand.”  Being Pavel Phoom’s partner is not without consequences, as evident by the unprecedented levels of naughtiness to which Dome has escalated. So much so, that at a particular event, Dome shocked Pavel with skinship that actually managed to make Pavel blush.  No one is questioning the credibility of casting these two as Beam and Forth, because they look beautiful together, as evidenced by affection from the camera.

#TravelWithUS featuring Dome and Pavel premiered on February 12th, 2020, to high-end expectations, and the couple lived up to the challenge. While Pavel injects rambunctious humor with his flirting, Dome was there acting as the perfect host explaining things with stoic precision as they visited various islands and locations.

Dome’s message of “When people go to beautiful places, they throw trash everywhere and destroy the beautiful nature. I would encourage you to care for nature when you travel” was much appreciated. Pavel teased Dome for saying this even during a travel show shot – Dome won’t stop being the responsible adult that he is.
Dome teases the “sloppy” Pavel, and the entire episode was characterized by their light-hearted banter and hot chemistry.

Dome as A Person

Dome is currently pursuing his Bachelor’s in Food Science and Technology from Kasetsart University and was actually the first runner up in the Fresh Boy contest, 2016. Dome might come across at first as an introvert and a man of few words. But once you get to know him better, he is amiable, kind, and caring. He is also a gym enthusiast and extremely diligent on working hard to maintain his physique. He even shot a YouTube video with Pavel Phoom underlining the kind of exercises that they prefer.

Dome is an avid photographer too. He loves shooting landscapes and still-life. However, it’s has been reported from translations of some of his IG Live’s, that his favorite subject is self-portraits. Yes, when you are as handsome as Dome is, there is no reason not to be taking your own pictures. When you have a style icon like Pavel as your partner, you need to keep up because comparisons are bound to happen. Dome has a panache for expressing himself, especially in attire, as he is also a fashionista. His sleek suits at fan service events showcase a mysterious aura and make him a standout even in the crowd.

Dome loves playing guitar and can sing as well. He also enjoys listening to K-pop group Bigbang and has a quick wit. Once during an IG live, one of the fans asked him to speak in English instead of Thai, so his sarcastic reply? “English!” He never minces words. In another recent IG live, when asked if he has gained weight, he replied, “I don’t weigh myself. If you don’t weigh yourself, then your weight won’t increase. I read that on Facebook”. Wiser words have never been spoken.

Dome prefers being by and watching the sea because it relaxes him. He is also very emotional and sensitive and has openly acknowledged his fear of losing fans, for who he is greatly appreciative. He is quite close to his Mother and Sister, who attend most of the fan meets and events with him. He is also very humble, and it is this quality that endears him to his fans. Recently, Dome was a part of the Posh Thailand photoshoot and looked quite ethereal. We’re all looking forward to watching him reprise his role as Beam in 2Moons3.