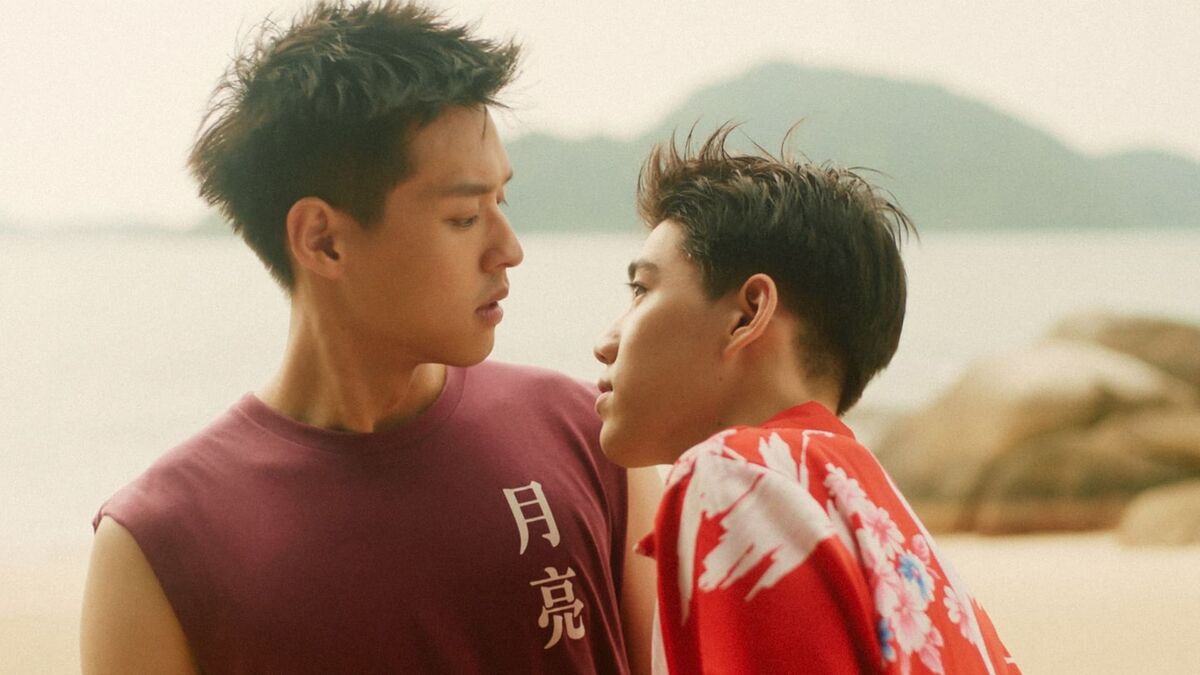 Imagine the 60s and the 70s if kids had mobile phones. The merging of the old with the modern gives this Nadal Bangkok an excellent production. Set in the Thai resort city of Phuket, also in one of Thailand’s least populated and smallest provinces – this series is filled with Thai customs and traditions that go back decades – I Told Sunset About You is not for BL viewers who demand easy, light viewing.

Promoted as Season 1 of a 2 Season series, I Told Sunset About You goes beyond the usual coming-of-age romantic Boy’s Love drama. It stars Putthipong ‘Billkin’ Assaratanakul and Krit ‘PP’ Amnuaydechkorn as Teh and Oh-aew, respectively. The complex exploration of their relationship is the storyline of this drama as they both attempt to grow and understand their feelings for one another.

Teh and Oh-aew started as friends but grew apart as a result of an ‘incident’ that puts the spotlight on Oh-aew, where it was always assumed to be on Teh. They meet again after several years when preparing for university admissions. They start to rebuild their relationship when Teh offers tutorial help for Oh-aew, who has difficulty understanding Chinese. A new bond is formed, but Teh remains aloof while Oh-aew reveals his tender side at this time. What follows are struggles to maintain the deep friendship both want to secure – will they become more than friends? Lovers?

This review focuses on the acting and character development, direction, production values, and the drama’s re-watchable quality.

Watch the trailer below:

After amassing a huge following in My Ambulance, Billkin and PP Krit, their agents, and Nadao Bangkok concluded that there was a need to fill in the ‘void’ – so to speak. The result is this BKPP project. While some productions rely on hype, I Told Sunset About You rely on both actors’ ability to perform and imbue their characters with total believability. Both of these roles are demanding – Billkin’s Teh has a competitive spirit and is fairly conservative but prone to emotional outbursts that can take their toll when he makes abrupt decisions. PP Krit’s Oh-aew is showier but equally emotional, also competitive, and a bit shy on the side. Having both similar and opposite personalities have the potential to make their friendship even more volatile. As Oh-aew attempts for intimacy, Teh responds with tenderness but does an about-face right after. Teh’s indecisiveness puts Oh-aew on an emotional roller-coaster ride with which his friends can’t help but sympathize. This is especially true with Bas (played with emotional integrity by the amazing Pongpol ‘Khunppol’ Panyamit), who attempts to comfort Oh-aew.

Both Billkin and PP Krit cry buckets – with Billkin so unabashed and unassuming, while PP tugs at the audiences’ hearts. Billkin’s emotional reveal to his brother Hoon (the superb Nat Kitcharit) about his feelings on the spectrum of sexuality is a major performance highlight. Sometimes scenes featuring the leads were emotionally draining to me, the viewer. I can’t help but wonder how they did it. Teh’s mother, Kanchana Pakviwat, is especially memorable, and so is Teh’s pretend girlfriend, Soraya Titawasira. I was told that both Billkin and PP Krit won acting awards, which did not surprise me.

The control and management by director Naruebet Kuno (who was an author for the hit series Hormones) has previously directed Billkin and PP Krit in My Ambulance. His work here is exemplary, and he should be commended. No wonder he was the preferred professional by Nadao Bangkok. This particular BL series can compare with the best of what other Asian countries have to offer.

The cinematography was excellent – the spectacular panoramic views in and around Phuket are breathtaking. As the cameras zoom in on our leads, I appreciate the subtle nuance in both their faces – attempting to show a variety of emotions in which they both succeed admirably. The editing is tight, with not a wasted second of content. The soundtrack is both haunting and appropriate. The drama’s stylist(s) who prepared the fashion for Billkin and PP Krit should be commended for those pale-colored and contrasting loud prints complementing the scenes throughout the series.

Aimed at higher entertainment standards, I Told Sunset About You reminds discriminating BL audiences that the genre is destined to stay. Echoes of French gay coming-of-age movies were assumed by this reviewer, which is my personal way to compliment this excellent show.