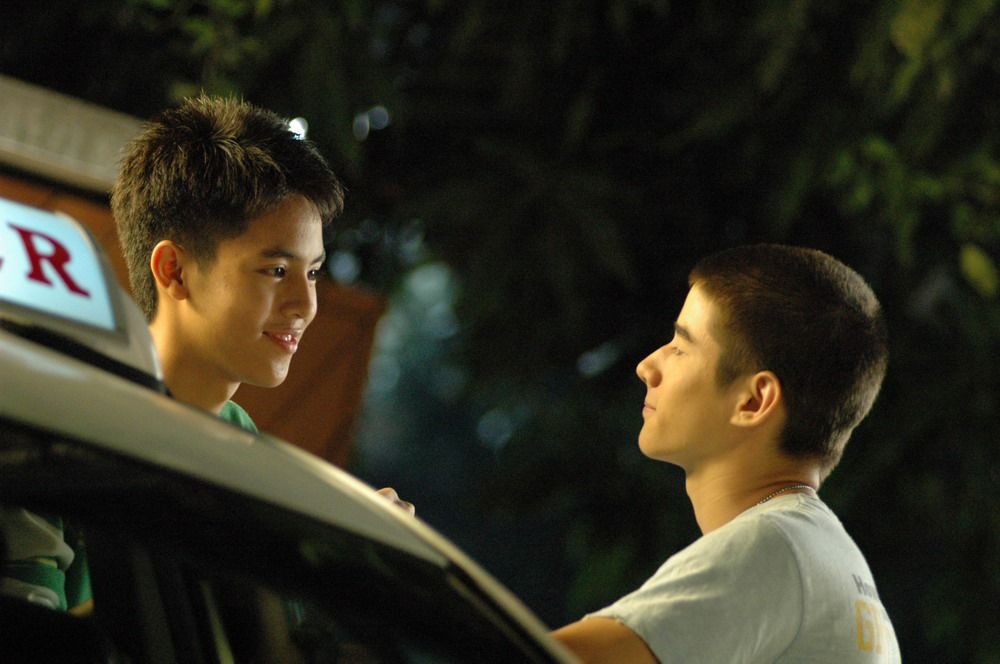 Hi Thai BL lovers! Part 1 is all BL TV shows in this series of articles, while Part 2 here is all about movies, so here we go!
—Edited by TheFNGee

Plot: The Love of Siam is an award-winning Thai movie about two young boys, one of whom (Mew, played by the talented Witwisit Hiranyawongkul) suffers from an identity crisis but is constantly facing his gender issue head-on. The other boy (Tong, played by Mario Maurer), a previous neighbor, has rescued Mew from rough bullying and has become a good friend ever since. They separated ways when Tong’s family lost their daughter, but they had a chance encounter, and as if time and space are of no value, their relationship began to expand, with both romantic and tragic consequences.

Background: The Love of Siam is Thailand’s submission to the 81st Academy Awards for Best Foreign Film, with Japan’s Departures winning the award and was directed by Ma-Deaw Chookiat Sakveerakul.

The film was first shot on December 26, 2006, taking advantage of the Christmas lights and decorations of Siam Square and the surrounding area. The Love of Siam is unusual among Thai films in many respects. First, at 150 minutes, the film is markedly longer than most other Thai films. Second, it is a drama film, which is rare in the Thai industry and mainly produces horror, comedy, action, and (heterosexual) teen romance films.

Director Sakveerakul said he felt the longer running time was needed to fully develop the characters and the story. He received full backing for this decision from producer Prachya Pinkaew and the production company Sahamongkol Film International. Chookiat stated in an interview before the film’s release, “They liked the first cut, which was even longer, so I didn’t need to convince them that much. I feel that every minute of the movie is important, and I’m glad the audience will be able to see it in full.”

A nearly three-hour “director’s cut” was released in January 2008 exclusively at the House RCA cinema, and it played for several weeks of sold-out shows.

The film was a departure for Chookiat, who had previously directed the horror film, Pisaj and the psychological thriller 13 Beloved. The gay romance was also unusual in that it involved two “straight acting” boys. In most Thai films with gay characters, most are coarsely depicted as stereotypically loud and abrasive trans women or transvestites with exaggerated effeminate characteristics. The young actors portraying Mew and Tong both had difficulties with the kissing scenes. Mario Maurer, who portrayed Tong, was nervous about the role. “I’ve never kissed a man, and kissing is not something you do every day,” he said in an interview. “My father said it was just a job and not to think about it too much.”

Witwisit Hiranyawongkul, who portrays Mew, accepted the role because it was challenging and because he was interested in working with the director, who was a senior classmate at Montfort College in Chiang Mai.

Plot: More than a gay-themed movie, Checkers is about the coming of age of a young boy named Oat and how his gay brother made the ultimate sacrifice for him to continue living and master the game of life. Set against the backdrop of a politically unstable Thailand, it is also a showcase of how young Thai men are drafted into the military via drawing lots. [See our Review ]

The draft lottery makes this a story that can only be told in Thailand. It was important that the film was a Thai film first before anything else. I wanted to be able to read the Thai script and communicate with the actors, so I moved to Bangkok in 2012 and enrolled in intensive Thai language classes. During the production, there were massive protests which shut down the capital and eventually the military took over in a coup. Martial law was declared and soon after, a curfew was imposed. We were all worried whether we would even be able to complete the film because our shooting overlapped with the curfew.

Background: Checkers is a 2015 internationally co-produced film directed by Josh Kim. It was screened in the Panorama section of the 65th Berlin International Film Festival and was selected as the Thai entry for the Best Foreign Language Film at the 88th Academy Awards. The film is based on the short stories “At the Café Lovely” and “Draft Day” by Rattawut Lapcharoensap.

We were location scouting just outside Bangkok when the authorities announced that Thailand was now under Martial Law and curfew was being imposed. That was very stressful. We were not sure if the production could go ahead at all. We lost our biggest funder during production. It was right as the military coup began. We had to scramble for loans. But the real surprise for me, a person new to the industry, was the non-linear nature of filmmaking. Being an ex-banker, I found this quite challenging from a personal point of view. I would watch my fellow producers having no issues with changing timelines, gaps in production being filled at later dates… I’m sure it was all “business as usual” for them, but I found this to be extremely frustrating.

The movie has, so far, participated in about 50 film festivals around the world, winning prestigious awards at Los Angeles Asian Pacific Film Festival and Toronto Inside Out LGBT Film Festival, among others.

Plot: Tam (Gun Atthaphan), a timid loner, is regularly bullied by his fellow classmates at school. He is met with similar rejection and suspicion within the narrow confines of his parents’ dingy home, where his father beats him. One day Tam makes an arrangement online to meet Phum (Oat Oabnithi) at a derelict swimming pool. They are both looking for sex, but their encounter leaves them with a feeling of comfort and security. A close bond develops between the two boys; before long, they are roaming the city’s rubbish heaps and dark corners together, day and night. Phum opens a door for Tam, revealing a fantastical parallel universe full of spirits and dangerous encounters. Although he feels safe and loved for the first time in his life, Tam can no longer differentiate between dream and reality and finds himself increasingly drawn into a spiral of paranoia and violence.

In his feature debut, Boonyawatana leads his protagonist into an ambiguous microcosm full of chasms while cleverly toying with the conventions of different genres.

The Blue Hour was screened at 9PM, and I made the mistake of seeing it alone and sitting in the front row, so it was just as terrifying as I expected it to be, and I watched the second half through my fingers. The film starts off slow and atmospheric and focuses on the sweet but troubling relationship between Tam and Phum, two closeted boys who hook up at a dilapidated swimming pool. Things that are scary in real life (abuse, bullying, and homophobia) combine with everyday unsettling concepts (abandoned spaces, urban decay, garbage dumps, and stains shaped like people) and the supernatural (unexplained sounds, vengeful spirits, and the mysterious appearance and disappearance of corpses) to create a feeling of suspense that sneaks so smoothly into “horror movie” terror that it’s almost believable.

The Blue Hour has a similar vibe to the movies of Apichatpong Weerasethakul, whose influence looms large over Thai indie films. Additionally, The Blue Hour is part of a trio of strong gay-themed Thai indie films being released this year. It debuted at the Berlin International Film Festival, alongside another Thai queer entry, director Josh Kim’s How to Win at Checkers (Every Time), also known as P’Chai My Hero. The pair of films, which both had local premieres at the inaugural Bangkok Gay and Lesbian Film Festival, has been joined by a third gay romance, Tanwarin Sukkhapisit’s widely released Red Wine in the Dark Night, which explores similar themes of gays as outsiders are thrown on the trash heap of society, but with a slightly lighter, fantasy-based tone.

Tam’s transformation is complete, and he’s crossed over to the other side. But what’s on that other side, and who is it for?

The Blue Hour might not be a movie for everyone, but fans of gay cinema and Thai art-house films will find something there.

The Love of Siam’s Witwisit Hiranyawongkul (Pchy) is back after a few years of being under the radar. Apparently, he is busy with his music. The above video clip was officially released by the producers, GMM and you can actually watch the whole series online, complete with English subs. There are a few issues with the subs, but it’s quite reliable! [ Thanks to aerish for the link and for providing information about this Club Friday series.]

I highly recommend that you watch the whole series (it’s a 5-Part series, and it’s really an outstanding showcase of Pchy’s acting talents.) The supporting cast, especially his lover, Win, is good, but the Mom is really outstanding as well. Note: There are already more than 3 million views.