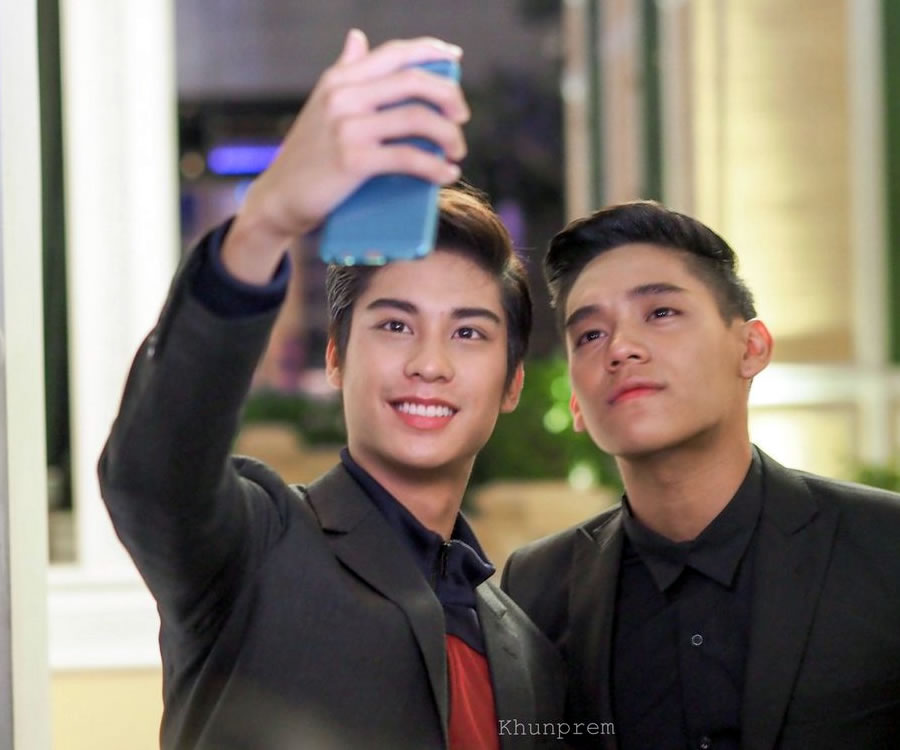 So there was a time when the YAOI (BL) universe revolved around two Japanese actors – Hamao Kyusoke and Daisuke Watanabe. Hamao has been “forced” to retire, and their love team is no more. And then there was Mario Maurer and Pchy, but instead of playing with the fans’ collective imagination, they killed the fantasy even before it could have been conceived… [Welcome to Fanboy diaries, a blog-a-thon (of sorts) featuring the events, buzz, casting news, and even personal bits of info about Thai actors Ngern and August]

So lucky are BL fans to discover a new love team – Ngern and August – both unassuming but playful, naughty, serious, and committed young Thai actors. The perfect Yaoi couple with both happy news and {casting} complications. The problem with Japanese BL love teams is that they are so stiff and self-conscious that no matter how intense the lovemaking scenes are, they still seem forced and rehearsed. With Thai BL couples, the playfulness (and naughtiness) is so refreshing that you jump with joy!

Earn-Pete, as they are popularly known, have inspired numerous fan fictions, the most awesome of which is quoted below:

Earn’s eyes are fixed intently on a distant spot on the soccer field that’s a level down from their classroom, and Pete watches with knitted eyebrows as he heaves a barely audible sigh and plants his elbow on the windowsill. It’s become familiar to Pete over the past few months, this motion, and he waits for Earn’s next sigh – isn’t surprised when he barely blinks, as focused on the view outside as he is.

When Earn lets his chin fall onto his palm, it seems like he’s not in this classroom any longer, seems like their math teacher’s droning about logarithms is no longer reaching him, like the only things that Earn is seeing and hearing are the flurry of movement on the soccer field and the distant, familiar sounds of yelping and cheering as the boys from the class next door burn their recess period with impromptu matches of soccer.

Pete knows it’s not the matches that are drawing Earn’s attention away though. He’s known for a while – one and a half years if he’s being precise. If he were any less of a friend to Earn, he wouldn’t have suspected anything. If he’d followed the longing movements of Earn’s eyes and the restless twitching of his fingertips any less, he wouldn’t have had the slightest clue that Earn was pining away for Noh like it was the hottest summer trend. But Pete’s a goner for Earn, and he’s really in no place to judge Earn for a crime that he’s equally guilty of.

[Excerpts from Thousands Upon Thousands, a fanfiction featuring Earn-Pete from the Love Sick Series]

The origins can be traced via Love Sick – a Thai series featuring boy + boy romance; not your cup of tea? Never mind, you’re here, or you can go away…

From the narrative above, you’ll know that there is unrequited love. Earn (Ngern) is head over heels in love with Noh, but Pete (his friend for years) may be harboring feelings, yet we’re talking about straight boys here – only that they are the kind who may fall in love with the same sex. Ah, say that again? It’s BL… anything can happen.

So, as history lessons for those who are late (including me) to the Earn-Pete romantic saga, here are two videos you just have to see!

So what’s so special about them that even a film reviewer/blogger like me is caught up with the craze?

Well, for one, Earn’s character is not just your ordinary high school boy who copies his homework from others and asks his parents for cell phone loads and whatnot. He is sort of a gay advocate, insisting on equality while at the same time pursuing someone based on romantic notions. A guy who suffers from unrequited love, yet he remains dreamy, inspired, and tries his best to be honest with his feelings.

August is the ideal best friend, always concerned with his friend’s feelings and state of mind. He is also insistent and honest about his concerns and will never leave you. How can anyone not feel lucky about that?

Of course, the series will offer conflicts and complications to keep the viewers interested, so in the beginning, the team is not as pronounced or as obvious as Phun and Noh, who started out as the main characters in Season 1. But their relationship is bubbling hot from the start – where a good PR plan has been executed from the beginning. Watch the videos above to see how they treat each other outside the drama series.

While the TV producers, their agents, and whoever is the brainchild behind the Earn-Pete love team frenzy, it is certainly working, as you can see…

In August’s fan meet where he celebrated his birthday, Ngern said:

I wish August will become a great actor. I hope we’ll stay together for a long time, forever.

A recent movie, Waterboyy, paired Ngern with another young actor (Beam), and the media blitz surrounding the movie is nothing short of spectacular, with an amazing soundtrack that is even better than the OST for LoveSick. However, feedback from fans is not the kind they have expected. Apparently, the Earn-Pete fandom is solid, and most of them are obviously not happy with what’s happening…

Next, what goes on inside a fan’s mindset?