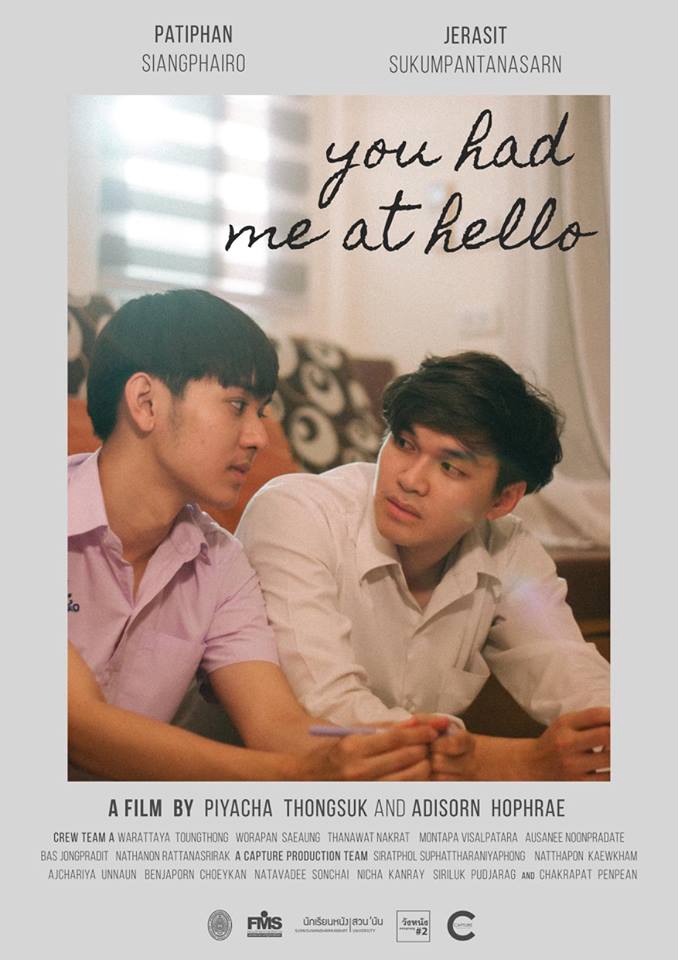 What would happen if Adisorn Hophrae, Piyacha Thongsuk, and the Capture Production team decided to make films full-time? Lucky for us BL lovers! (or any movie lovers for that matter).

While the film You Had Me At Hello is incredibly short at 25 minutes 52 seconds, it leaves so much to the imagination that one can’t help but clamor for more.

It’s the chemistry between the two young leads that is quite evident and is on display even in their first scene together. Such a tease paves the way for the audience to anticipate – what will happen next? Are they attracted to each other? Is this love at first sight? Do they seem interested to pursue further or what?

There may not be a sequel or even a prequel, but we took it upon ourselves to reach out to the production team and do this interview.

Many of the film’s viewers agree that there should be a Part 2 or even a drama series for ‘You Had Me at Hello’. Tell us a bit of background about this short film. When did you begin filming it? Was it hard to make this film? How did you think of the title?

We want to tell a story about LGBT that is focused on the main characters without having to show love scenes. We have to feature something deeper and meaningful in a limited time.

We started pre-production last August 2018, shot the film and finished editing in November 2018. It took a total of 4 months to show a ‘finished product’. Honestly, it’s quite difficult because we have a few crews and the time for scriptwriting, the actual shooting itself and then editing the scenes are quite limited.

We want our film to have a catchy title. Similar to the prominent and popular film Call Me by Your Name. Then we chanced upon a music video by Polycat, entitled “เวลาเธอยิ้ม”. The song has an English name – “You had me at Hello”. We love the name of the song, thus it became the film’s title

Tell us about the producers, director and the crew of this short film.

There are 4 people who form our production team. We have seniors and juniors that supported us from our school and friends from Capture Production.

How did the casting go? How did you select the two lead actors? Tell us more about them? Was it hard to find actors willing to play those roles?

Our production team announced an audition via Facebook fan page. We did video casting. Once the video casting is completed, we compare the actors to each character. It’s the ‘chemistry’ that matters in the end who will play “Pun” and “Tone”. Then the director finally decided on the cast.

“Tone” is performed by Dew (Jerasit Sukumpantanasarn). Dew has spontaneous acting and he is such a standout. Moreover, he has the most chemistry with “Smart” so, we choose him to perform the role of “Tone”.

“Pun” is performed by Smart (Patiphan Siangphairo). Actually, the character of “Pun” isn’t like what we saw in Smart. It’s a versatile character. Smart appears bright (no pun intended!) to us and is an attractive guy. He can be a convincing student in high school with his youthful looks. Even though, he has studied in university in real life already.

Lastly, casting is quite difficult because the characters of “Pun” and “Tone” are not specifically identified as top or bottom.

[Note: Most, if not all, BL characters who are in an intimate relationship are identified as either the top or the bottom. It’s not necessarily an essential ‘classification’, but one that is used often which is entirely related to sexual ID.]

Certain scenes in the short film are just so cool: the reference to Charlie Brown, the food (Gourd and it’s being nutritious), the first scene where they meet for the first time. Can you tell us more about them?

Charlie Brown is a symbol of a child who is a loser (failure in school, that is) and Snoopy is his friend. So, we used Charlie Brown to represent Pun and Snoopy for Tone.

The first scene at the coffee shop puts both young men at tentative positions. Using Charlie Brown as a symbolic ‘act’ of friendship broke the ice and made them feel more at ease with each other. This allowed them to further develop their friendship.

How did you choose the music?

We want an OST with a nice meaning, proper rhythm and features a male voice. When we were listening to many songs on YouTube, we accidentally found “โลกเปลี่ยน”. The artist is “The white hair cut”. It perfectly matches our requirements.

Boys Love (BL) Yaoi in Japan is popular in Thailand. What can you say about the current BL trends in your country?

In Thailand, Boys Love stories are popular for such a long time. The movie which generates this trend is “รักแห่งสยาม” (Love of Siam). It was a favorite among girls more than 10 years ago.

What are some of your future film projects? Tell us previous films (short films) you have made already?

At present, we have no plans to do any new projects. Most of our previous projects are short films we made as part of school requirements. We didn’t do BL as our main work in the beginning.

We started to do this genre from “สัญญาณ – Unofficial MV” and “Closeness – short film” until “You Had Me at Hello”.

What kinds of filming processes do you follow? Do you have any filmmakers you admire or get inspiration from?

We follow every kind of filming style and adapt to what will suit us. We like to focus on relationships.

You Had Me at Hello gets inspiration from Thai film “รักแห่งสยาม” (Love of Siam) and foreign movies such as Call Me By Your Name and Love, Simon.