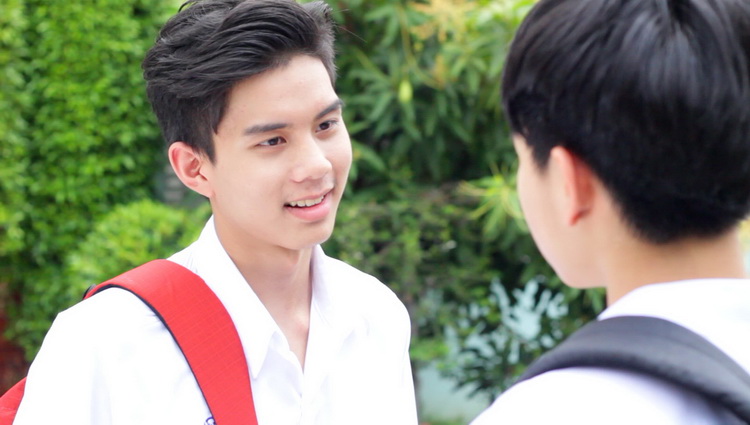 Young Thai’s fascination with handsome ‘gay’ couples has further ignited their local beauty industry. Products from unknown brands struggling to gain a foothold on the market capitalize on the popularity of such ‘gay’ couples.

This is one of the premises behind the film Boyfriend. While not really a couple sharing intimate moments, Toey and Aek agree to play along.

Toey (Boeing Sippavit Dechapun) moves to Bangkok to leave behind memories of his broken heart. His new classmates Aek (Max Natchapon Kuayngern) and Mike (Kan Srivalwit) offer friendship and company. Aek even invited himself to sleep at Toey’s neat and tidy apartment.

What started as a ‘forced’ invitation turned into a regular routine between the boys. Aek explains his need to sleep somewhere else since his parents are fighting with him. Reluctantly, Toey agrees.

Their physical closeness becomes gossip item in school – are they going out?

Boeing and Max play a pretend couple to earn easy bucks. While not really a ‘gay’ couple, they began to promote beauty products and earn money the easy way. All they have to do is act sweet to each other.

Inside the school, BL (Yaoi)  female fans began to take notice. Excited, they took pictures of the couple. With their popularity unabated, Mike pushes his friends to take their ‘relationship’ into the next level. Thus, the pretend couple do ads, and even tried to act in a love scene for a movie. But Toey appears to be regretful of what they have done already…?

As to be expected, our young leads act with tentativeness, I was afraid one of them might even cry. Max Natchapon (19) despite his good looks, regularly frowns in the camera. As Aek, he initiates everything while Toey simply follows. There is undeniably a strong on-screen presence from Max. I was hoping he was cast in other movies, but Boyfriend is his sole project as of now.

Max tries comedy. But when you put two handsome boys together, expect sparks to fly, Now that they agree to act as a hot gay couple, are they going to show skin or more?

Boeing Sippavit (19) looks the part of a lonely, newcomer who has to please his mates.  Such a low-key personality suits Boeing to a T.  Like Max, he hesitates quite frequently, affecting the credibility of his performance. But both actors have their moments in the movie too.

Boyfriend is not like the 2015 trio of Thai gay films which has attracted audiences worldwide. The film is quite simple, yet engaging at times.

But not as impressive as Checkers, The Blue Hour or Red Wine in the Dark Night.