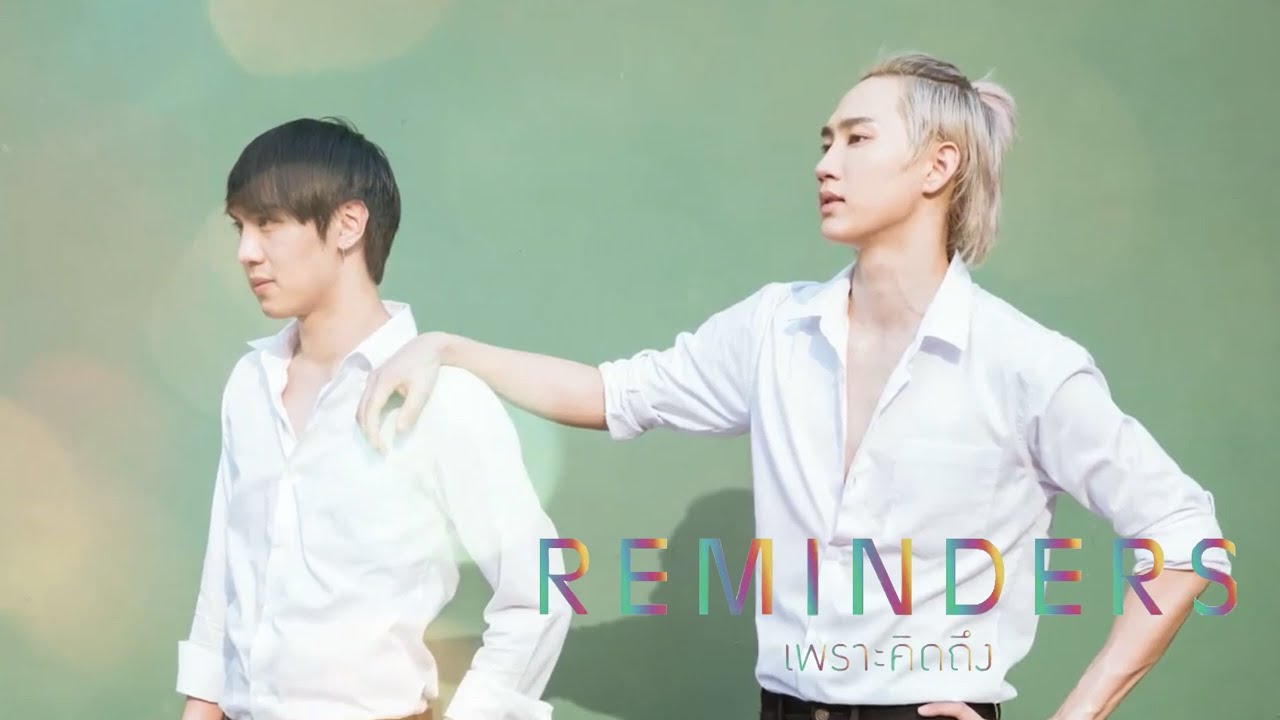 With only 3 episodes, Reminders the Series brings back both wonderful and not-so-wonderful memories. You see, Love Sick, when it was shown a few years ago, remains a trailblazer in the Thai BL universe. Its depiction of young, romantic (sometimes even scandalous) affair remains debatable. Is it worth it to hurt a girl in favor of another boy you want to have sex with?

Of course, Love Sick is not just about two boys having an intimate relationship. It involves a lot of stuff – friendship, brotherhood, competition, bullying, discrimination, and a host of issues under the cloud of teen angst.

Yet Reminders is also not just about 2 characters from Love Sick. It also features 2 couples from Love by Chance but depicted quite differently. When I say different, it means Saint and Perth (Pete and Ae from the drama) display completely new personas.

The same applies to Mean and Plan. Mean Phiravich is the epitome of an elite boy with a lot of emotional hang-ups. And he has portrayed his previous character perfectly. Plan Rathavit, on the other hand, has departed from his cutesy, innocent Can (Cantaloupe) persona with his K-pop hairdo. While his pink hair requires some ‘getting used to’, he remains quite an interesting character!

Let’s compare the before and after images:

If the objective of the make-over is to project a different image for Plan, I guess whoever is the stylist has failed to a certain extent. Plan lost some of his innocence, and – at times – looks like a comedian in a bar. I understand that the copyright issue for Love by Chance would have them alter their on-screen persona. But the series’ director (New – who is also doing EN of Love and Until We Meet Again, and previously Love by Chance and Make It Right) should have known the acting capacity of his cast.

Mean was more successful to act the opposite – he becomes the guy who fell hopelessly in love with Plan’s character – Wish.

I’m in the opinion that Plan and Mean almost eclipsed Saint and Perth in Love by Chance, except that their relationship was cut abruptly by the copyright issue. It could have been an extremely intimate and intense relationship. Among the three couples, theirs still has plenty to explore. Episode 2 is almost totally dedicated to Mean and Plan.

Wait! Before I go any further with my review, what’s the story all about? I’d say it involves 3 couples in various relationship stages – where trust, jealousy, self-confidence and real friendship and brotherhood are issues yet to be fully explored. It is also meant to be a ‘teaser’ for the upcoming Love Sick S3.

Update: There is news that Lovesick S3 will not happen anytime soon.

Saint, who is currently riding the waves of popularity, plays Son. A rather aggressive young man who wants to celebrate his partner’s birthday with a twist. Perth’s character – Pin – is unlike Ae in that he is less confident about himself and even less assertive about his lover. For all its worth, I do find Saint’s performance to be quite tentative, yet there’s that fire in him. Perth’s hairstyle is a bit distracting, and he displays almost the same level of tentativeness as Saint.

The love scene at the end of Episode 1 is – by all means – hot. Their on-screen chemistry remains at a high level as in Love by Chance. And that’a not easy to do given all the controversies surrounding their casting, and what happens outside the show.

The final episode also offers something intense and endearing about them. In Episode 3, Perth shines when he delivers what I thought was a heartfelt performance. As he reveals his innermost feelings to Son – his jealousy, his insecurities, his longing – his tears fell almost instantly, and how he expressed himself truly got to me. I also love the fact that Saint offers an understated, yet effective performance!

I have little respect for White and plenty of admiration for Captain. However, Reminders gave me another channel to understand what’s the fuzz about White. I would say, he has matured quite a bit. I guess he’s the type of actor who relies heavily on the director’s push and pulls. It must have been more than 4 years since I glimpse upon Captain and White and their romantic, almost tragic relationship. The chemistry is still there. In fact, it got even stronger.

Captain – is and always will be – Thai BL universe’s knight in shining armor. His current flowing hairstyle suits him so well. It actually enhances his already handsome profile. Captain commands the audience’s undivided attention, and he’s quite consistent as Noh, the one everyone wants to be as their hot lover.