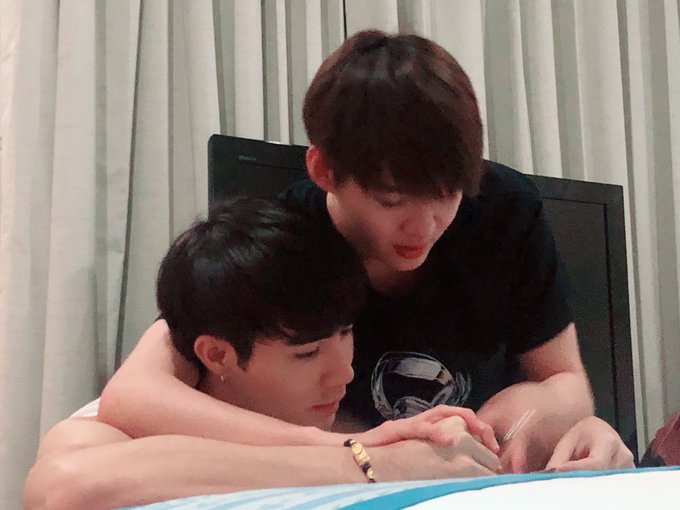 Beyond Fan Service: How Thai BL Actors are changing the landscape of shipping actors – The case of Saint-Perth-Zee Part 2/3 [Opinion]

We are past the stage when Mario and Pcshy took the world by storm via The Love of Siam and the subsequent media frenzy and the somewhat ‘forced’ fan service.

Apparently, there is no sexual (or otherwise) attraction between the two. And the kiss is just that.

I was nervous. I’ve never kissed a man and kissing is not something you do every day.

That certainly burst the bubble.

Today such a move is unacceptable. Fan service is the norm and these actors’ privacy are set aside. Unless you don’t want the constant adulation and invasion to your private life, it’s hard to be a Thai BL actor.

But many of today’s popular BL couples have endured, much to their fans’ delight. However, being a couple can abruptly end when you least expected it.

Let’s take the case of Saint and Perth who shook the BL universe via Love by Chance.

While they may not be the best of actors, they certainly know how to do passionate kissing scenes – the kind that keeps the BL world on fire.

Speaking of acting performances, some scenes in LBC actually suck but here’s the rub: you need to be patient with actors because some of them tend to improve and many did. I’m no Thai BL actor apologist but Perth showed so much improvements in succeeding projects that you can’t help but appreciate his efforts. Much more with Saint.

In the untimely demise of the LBC series, both actors parted ways and not without controversies involving managers and fans. I’m not going to dwell on that anymore than I deal with gossip here.

What needs to be said in the aftermath is how Saint and Perth cope up with the end of a major acting milestone. I have observed this. The apparent tenacious and aggressive stance of Saint and how he moved forward. While credit goes to his management, it appears to me that Saint is no mere talent.

He is proactive in his acting career and whether he is considered for dozens of commercials and fan gatherings is no longer an issue. In fact, it is irrelevant.

Fans love him. Critics and bloggers adore and are excited about his next moves. Therefore, he is not just a celebrity or an actor. He is a phenomenon. Little or less can be said about any of his contemporaries. Except Singto or Gun who are both his seniors.

But to survive the onslaught of fresher faces, he needs a partner.

Models transition into acting all the time. Zee is.no exception. I find it both amusing and tragic how some fans attacked him personally. But that is part of the now toxic BL universe we all belong.

Is he the right one for Saint? Many think so. I do think so.

When I asked some friends on Twitter to give me samples of Saint and Zee on screen chemistry, the below clips seem to give justice to the clamor for.more of them together.

Now, Perth and Mark Siwat are paired and will appear soon together on screen, but the level of frenzy bestowed on Saint and Zee is just – otherworldly.

Two or three years from now, I will revisit this article. I’m not sure exactly why but I want to see if my perception of Saint is true or not. The last time I did something similar is when me and a friend predicted the career path of the Lovesick leads. It was a 50% score which means we failed.

But while Captain and White sustained a career, August did fare well than Ngern.

Will Saint and Perth and Zee get any better? I certainly think so.

Update: If you find that you want more of Saint and Zee before their much awaited series, then this additional clip is the right one for you – coming from my friend who had shown me the Saint-Zee way.

Wow. I bet you've seen the Unseen Version of Truth or Dare by now. 🤭 https://t.co/HladjPtjkS

I gotta commend @.MUSICCREAMgmm for the editing of this gem–the SFX & the captions made everything a dozen times funnier. 🤣

Thanks to this project, ZS even made it on national TV!

Indeed, these actors are lucky to have such well meaning and dedicated fans and vice versa!