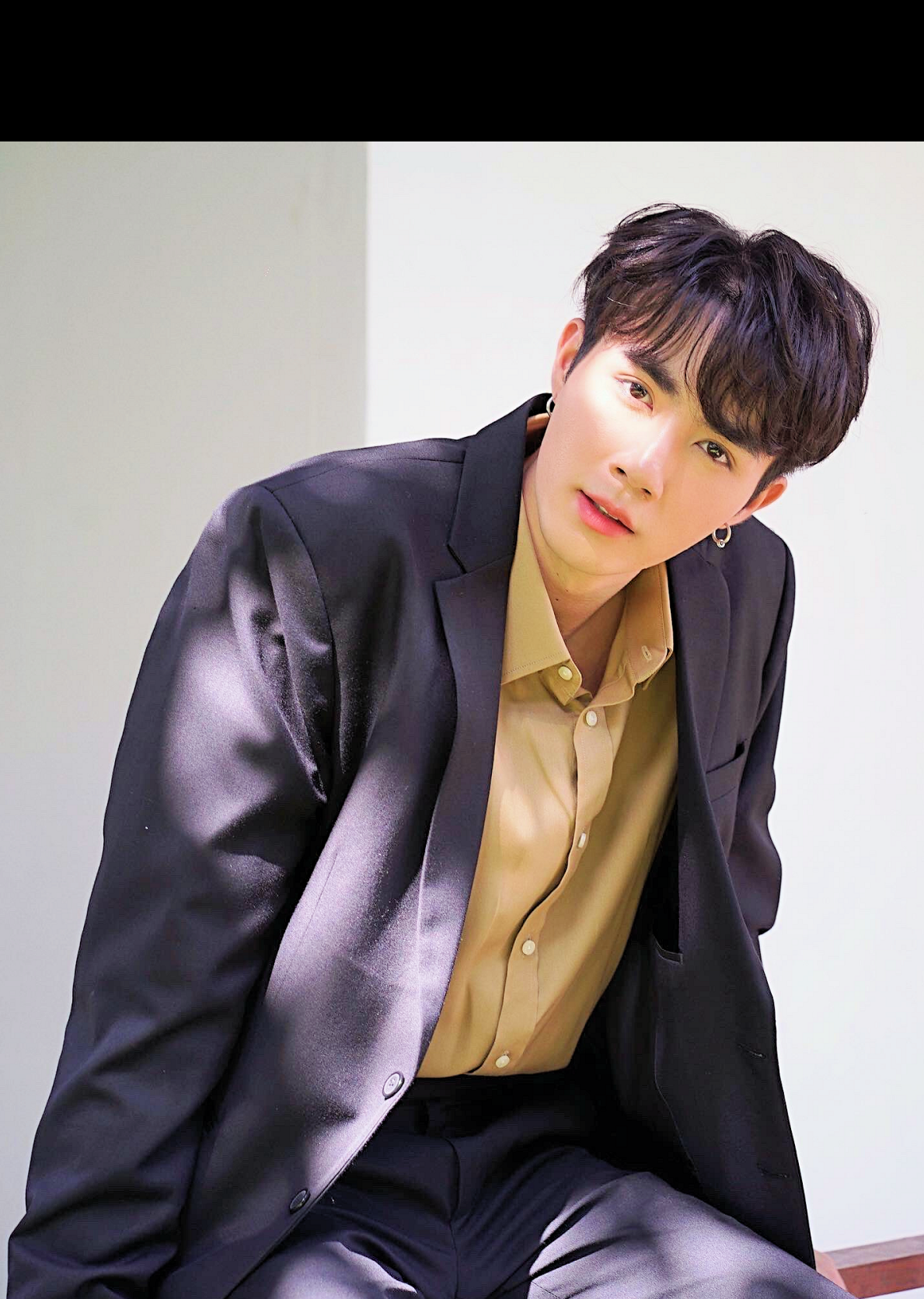 Pruk Panich (พฤกษ์พานิช), was born September 10th, 1992, nicknamed Zee, is a Thai actor and model who shot to fame portraying the popular character “Fighter,” on hugely successful WhyRU The Series.

Zee As An Actor

You can’t really call Zee a newcomer. He is a member of the hot-boys gang Domundi TV who do regular travel shows on their YouTube channel of the same name. Zee started his acting career by playing the support role of Captain in Friend Zone The Series. After that, he auditioned and was selected for the role of Fighter alongside the more experienced actor Saint Suppapong.

When the first episode premiered, it drew widespread criticism for the haphazard direction and inconsistent scenes that seemed stitched together in no particular order. I was sorely disappointed. However, the lead pair Zee and Saint managed to salvage the situation, as they laid the groundwork for the ensuing conflicts between their characters Fighter and Tutor. Zee radiated calm, portraying an excessively arrogant Fighter. No over the top acting, as he soulfully gazes at his love interest, while trying to keep his feelings hidden.

Zee took on the role without much of a character sketch and made it his own. Fighter’s inherent feelings for Tutor are always at odds with his inner emotional turmoil. Trying to fall in line with his father, who wants him to date HwaHwa, Tutor’s best friend, doesn’t make things any easier. However, Zee breezed through the performance with panache. In his conflicts with Tutor, Zee is confrontational, while in his interactions with HwaHwa, he is a tad guilty.

Both Zee and Saint managed to capture the attention of the audience as Fighter & Tutor engaged in an emotional tug of war. They would argue ostensibly, but that doesn’t diminish the attraction they feel for each other or the inherent guilt on both sides. Zee is one of those few actors who can emote with very few words and make the audience feel his emotions. The longing gazes and forlorn expressions made Fighter slightly more human. He is confused about his sexuality, in denial, but also irrevocably in love.

Although Fighter goes through a phase of gay panic for an extended period, you can only keep true feelings at bay for so long. His attempts to force Tutor to be his teacher alone makes way to helping Tutor in a Koala bear outfit to defending him from angry customers. In each frame, Zee amazed me with his varied expressions of possessiveness and protective instincts.

Fighter is not exactly a patient person. But it’s incredible how much he holds off, despite the hot kisses he and the character Tutor share. The chemistry is off the charts. Zee brings forth this slow-burn passion to their kisses, which make audiences hyperventilate and wishing for more. Yes, they are, without a doubt, “The Sensual and Passionate Couple.”

Director Cheewin Thanamin’s dramas are sometimes characterized by an over-the-top sensuality. However, can that alone sell a drama to the audience? The answer is debatable. Some enjoy watching BL couples being down and dirty, while others emphasize the apparent lack of storyline. Zee’s acting seemed a little self-conscious at first in some of their passionate lovemaking scenes. However, I feel that both Saint and Zee have the oomph factor in loads.

Zee’s acting skills improved dramatically in the penultimate episodes where Fighter and Tutor (#FighterTutor) break up. From angrily confronting Tutor, trying to kiss him forcefully, to finally breaking down and begging Tutor, Zee managed to make the character come alive. I cried, watching this scene. To prove the scene with Tutor wasn’t a fluke, Zee made everyone sit back and take notice in the scene where he confronts his character’s father. Fighter effortlessly stood his ground and broke down the various misconceptions regarding sexuality and his feelings

Although the finale seemed a bit rushed, I’m glad that the drama portrayed Fighter and Tutor’s relationship realistically. Zee handled the scenes with Saint effectively. At times he might have seemed conspicuous when paired with an experienced Saint, but he certainly wasn’t invisible and transformed Fighter into a very memorable character.

His Chemistry With Saint

Being a relative newcomer, Zee being paired with an experienced and popular actor like Saint Suppapong would either draw comparisons or criticisms. However, Zee took everything in stride, not just the praise but also any constructive criticism.

Good BL couple drama series depends on not only the storyline but also the chemistry of the lead pair. The combination of Zee and Saint did not disappoint. They were always having discussions about scenes and ways to improve them. Zee has accepted that being tense around each other would undeniably affect their work, and as such, the first thing they did was spend a great deal of time talking to and understanding each other better. In fact, Zee and Saint did most of the direction of their character’s intimate scenes.  They were the main reason those scenes were so “hot!” Saint stated that they didn’t just share opinions and perspectives about work but, in general, had discussions about things pertaining to their daily lives. They have an enviable friendship that is based on mutual respect and adoration.

In a recent interview with Lips Magazine, when asked about how they prepared for their intimate scenes, both Zee-Saint were forthcoming about their discussions. They would weigh in the factors concerning the kissing scenes, whether it is out of love, to titillate each other, just teasing or love surges. Zee readily accepted that he was shy the first time they kissed and took almost 11 retakes. But these experiences helped to shape him better, and as such now, he is well acquainted with the various acting styles.

Zee and Saint are really close, and it stems from the fact that they are both very honest and straightforward in their interactions. Saint has confessed that Zee is prone to be very caring and attentive to people he cherishes. Although Zee is older than Saint, he is innocent like a child, which brings out Saint’s protective instincts. We’ve seen this before in a Thai BL couple (Fluke and Ohm in UWMA). Zee and Saint are quite well versed in each other’s likes and dislikes and have a connection where they can read each other’s thoughts without conversation.

Surprisingly when asked if they would co-star again and what type of role they would opt for, they both (#ZeeSaint) answered that they would love to work in a series where Saint is the protagonist and Zee is the antagonist. Zee further stated that he wants to portray a negative character as it will help him understand the varied feelings and emotions that playing such a character would involve. The two of them are closer than most BL couples and have an unhinged relationship, which makes one of the most popular BL couples of the current crop.

Zee As A Person

Zee has completed his Bachelor of Communication Arts – Advertising from Bangkok University. His family includes his parents and two sisters. He is an avid photographer and likes spending time at different cafes. His favorite music artists are The Weekend and Post Malone, but he mostly listens to all kinds of music. His favorite movie of all time is “The Lord of the Rings,” and although his favorite genre includes fantasy, horror, or adventure, he is not fussy about most genres.

His favorite dish is stir-fried pork with shrimp paste, along with stir-fried melinjo leaves with egg and Japanese Shabu. He avoids foods that are made with guts – yeah, me too. He is very health conscious and avoids starchy food to watch his weight. Zee considers his eyes as the sexiest part of his body, and most of his fans would agree. His eyes are really expressive. Although he turns up dressed to the T at major events, Zee prefers casual wear most often. He doesn’t have a favorite clothing line but focuses on comfort instead. However, he is particular about his colognes which include Giorgio Armani Acqua Di Gio Profumo and Burberry Brit Rhythm for Men.

Zee’s real name, Pruk, means “Trees.” He was named so because his father has a green thumb. He plants so many trees that it seems like they live in the middle of the forest. Zee’s ambition was to become a model since he felt it was cool. Now, however, he wishes to open a bar or restaurant in the near future. In 2018, he played a music video, “Gaut Tee WahngBpao,” for famous singers Rose Srintip and Pete Peera.

Personally, Zee feels that each character is an opportunity for him to interpret and convey his emotions as that character. It makes the character come alive, to hold the emotions, and to make the audiences feel connected with the said character to the fullest extent. In an age where some actors just see BL dramas as stepping stones to launching their careers, Zee is very clear about the fact that it doesn’t concern him if the drama is a straight or BL romance. He will strive to give his best in both cases. That’s a really positive attitude right there. The Why RU series might have ended, but I’m looking forward to watching him act in many more future projects.