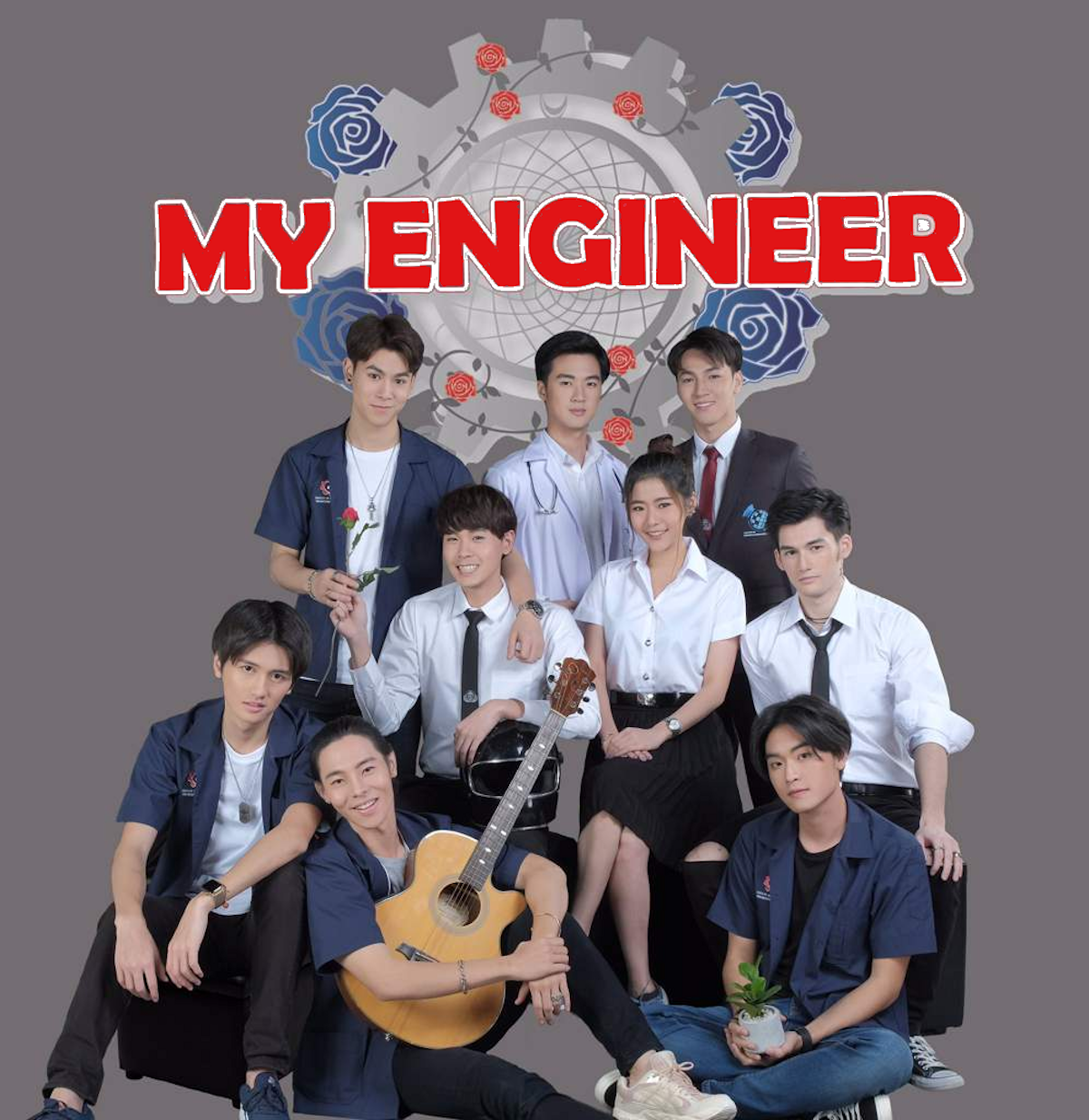 Episodes 10 and 11 drew a blank on quite a few problems that existed between the four main couples. Bohn & Duen are still settling down in their new relationship and, as such, have sweet moments sprinkled in with excessive arguments. Mek & Boss’s relationship finally showed some progress, and they are now ‘together.’ On the other hand, Ram & King are slowly growing closer and are on a learning curve. Thara & Frong are still on the edge of possibilities, though. Let’s review and look at what happens in Episodes 10 and 11.

Episode 10 was the most hilarious following Bohn & Duen. Duen is hiding from Bohn while we are all left wondering what happened the night before. Trust me, my imagination stretched a bit too far, thinking about what might have transpired. But things get awkward when Bohn finally catches up to Duen and confronts him. Duen accepts that all he did was wax Bohn’s legs, and in the scuffle, Bohn fell down. They have an honest conversation where Bohn reassures Duen that their status of who’s the ‘top’ or ‘bottom’ doesn’t concern him. He just wants to be with Duen, and that’s all that matters to him. I’m so glad that we finally have a BL couple trying to break through the “Seme-Uke” stereotypes and telling the entire fanbase that being Versatile is very much a reality.

As punishment, Bohn decides that Duen will spend the night with him the next day. Duen gets seriously terrified and imagines BDSM-level scenarios. I love how silly these two can be.

However, with the level of temper issues that Bohn has, problems will follow. Tee fuels Bohn’s misunderstanding about Thara and Duen’s relationship, and yet again, he argues with Duen. Duen patiently explains that Thara is his cousin’s brother. Bohn apologizes for the nth time and tries to get romantic. With these two (#bohnduen), it’s a revolving circle.

The best part of the episode was the ending scene. The entire Engineering group gathers at King’s home for an impromptu dinner. Duen unknowingly gets drunk and tries to kiss Bohn, but ultimately falls asleep. While Bohn is holding Duen in his arms, just for a moment, he’s tempted to kiss a sleeping Duen. But then he decides against and simply continues to hold Duen in his arms instead. A silent but important message: “Consent is Important.” I appreciate how the show’s producers are sending out strong messages via the drama.

Episode 11 is yet again characterized by #bohnduen sweet moments. As per their daily ritual, Duen gets flowers for Bohn. But the romantic scene turns hilarious when Duen gifts him a cauliflower. I just couldn’t stop laughing.

I love the tug of war that Bohn & Duen play. Since Duen is fooling around, Bohn tricks him into cooking for him again, and they again get into a cute tussle. I love their adorable moments, which make them quite different.

Bohn and Duen again spent the night together, where Bohn sincerely requests Duen to move in with them. Duen is surprised at first, but then he refuses, saying that they need to learn more about each other. I’m glad that the drama shows a relationship in a mature light. However, since these two are prone to arguments, they get into a fight again the next day, when Duen invites Frong on a double date with them and Thara. The situation gets worse when Duen admits to kissing someone else, and Bohn gets extremely jealous. Duen takes advantage of Bohn’s jealousy and promises to tell him about his first kiss if Bohn behaves himself at the double date. Cooper must be appreciated because playing a temperamental guy like Bohn isn’t easy. Poy, on the other hand, gives a fresh outlook to Duen along with strong conviction. Duen never backs down, and I really like that about this character.

There weren’t many scenes concerning this couple in Episode 10. But we did have some fluffy, comic moments like Boss trying to copy Mek’s answers in the exams. Even though their relationship is still progressing at a snail’s speed, watching them is a joy.  Also, the way Boss sulks when King’s sister calls his relationship with Mek fake, is kind of hilarious. The guy is annoyed that people think their relationship is not real.

Episode 11 totally belonged to Mek-Boss as we got clarification about their relationship. Boss finally attends the audition but has to give up when Fon’s managers ask him to back off from her and not potentially damage her promising career. Boss is heartbroken, gets drunk, and blames himself. Mek finally can’t take it anymore and kisses Boss. He shows Boss the entire collection of their pictures and boldly confesses. Boss reacts by saying that Mek is not the only one that has those feelings (after all this time).

We get to watch them behave like a normal couple the next morning, where they are cuddled together. Boss finds their old nameplates with “Talkative Wife” and “Silent Husband” written on it. We are shown a flashback from which it becomes evident that like Mek, Boss had been hiding his feelings for too long. I guess both were afraid that their friendship will be spoiled and kept their emotions at bay.

Ryan, as Mek, has good control over his emotions and doesn’t falter. Boss, on the other hand, has been playing the fool for too long, unsure about Mek’s feelings, Intouch managed to give the character the requisite silliness while playing coy. Although their short kiss was criticized, I guess it depends on the actors’ comfort level.

Ram faces problems at home when he discovers his father’s infidelity. He totally breaks down when he figures out that his father is having an affair with Pin, his best friend. It is really painful to watch him because he is unable to share his problems with anyone.

At his home, King promptly figures out that there is something disturbing Ram. He takes him along and patiently talks to him. I just love their relationship is evolving. It is slow, sweet, and comforting. King sees Ram as someone whom he wants to support, and for Ram, King means solace and peace. You are lucky if you have someone with whom you can share all your problems and emotions. Although Ram tries talking to King about his father’s issues, Ram has to leave with his friends.

Ram can’t stand his father’s cheating ways anymore, so after a bitter confrontation with him, he leaves his home with his pet dogs. King finds Ram on the road and brings him to his dorm. Ram unable to hold it anymore confesses about everything. The scene was emotional and made me cry. King, although shocked, becomes the silent support that Ram deserves, as he wails miserably.
The next morning Ram seems quite somber and shocks King when he shows him the Venus Fly Trap he bought along. King is surprised that Ram would remember to bring it along. Ram’s statement, “It’s very important to me,” affects King emotionally.

I’m enjoying the chemistry between Perth & Talay. The camera seems to dote on Talay while Perth plays the silent Ram with bold conviction. For a seeming newcomer, Perth has expressive eyes. He makes you feel Ram’s anguish without speaking much. Talay’s King, on the other hand, is the soothing presence that always reaches out to help.

The fans are stressing on another series, which entirely focuses on the Ram & King ship equation.

On the other hand, Thara and Frong’s relationship is still on shaky grounds. Frong rushes to the hospital, where he learns that his mother has been diagnosed with a tumor. He grows despondent and takes out his anger on Dr.Thara when he tries to comfort him.

We get some relief on the #tharafrong issue in Episode 11. Frong comes to meet his mother, who appreciates Thara’s efforts to make her feel comfortable. Thara has been bringing her notes and books to help her understand her situation better. She also informs Frong that Thara’s father died of cancer, and that’s why he sympathizes with her. Frong feels guilty and immediately apologizes to Thara.

The start of a new relationship can depend on mutual trust and respect. Frong needs to stop analyzing everything and enjoy life a little bit more. Thara, with his carefree attitude and sweet smile, is just the right guy for him. MD Nutthapong and Shane are truly the right choices for these character roles. Shane falters a bit at times, but I’m sure we will see progress in the coming episodes.

The drama might have faced a lot of casting problems and controversies, but it has shaped up well. I won’t say that this is the best BL drama out there, but My Engineer has its own strengths and weaknesses. Watch it for the main leads and their beautiful chemistry. You will find it difficult to choose between any of them.