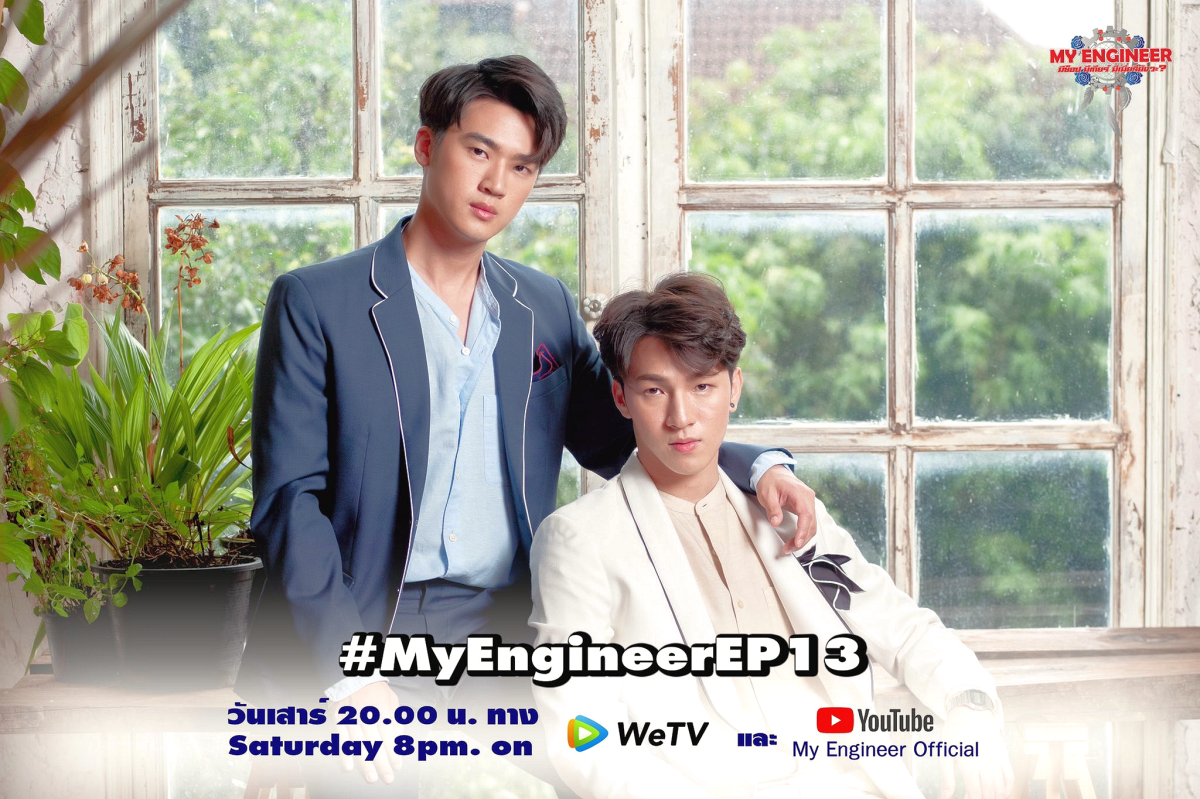 Emotional security takes a nosedive as we approach the finale week. Our four main couples are going through major changes in their relationship, some good, some bad. Some draw a blank, and some are left in a state of confusion while others are ending their relationship over apparent miscommunication. Let’s review Episodes 12 and 13.

My Engineer Series official has already confirmed that the Season Finale will have a sad ending for one of the four lead couples. I’m not betting on which couple that will be. In the current scenario, except for Thara & Frong, there are no viable options left.

We come to the anticipated double date with Bohn & Duen coupling with Thara & Frong. However, the only unhappy person is Bohn. I really don’t understand why he is so jealous and insecure about Duen and Frong’s friendship. Duen, on the other hand, is his usual happy self. As soon as the date ends, Bohn demands to know who was the first person to have kissed Duen. Duen jokes that it was his well-worn teddy bear. Bohn sulks as usual but then tries to get a kiss. However, the attempt is thwarted as usual by Duen. I really enjoy their tug of wars.

We get some more ‘fluffy’ moments when Duen suddenly calls up Bohn and asks him to meet near the Gear Statue. Bohn is nervous because it’s the last day of their proposed one month. He is afraid that Duen will stop meeting him since there is no more requirement for Duen to get Bohn flowers anymore. Duen gifts him a rose plant instead, and Bohn is surprisingly happy. These two can be really adorable when they aren’t fighting over inconsequential topics.

A camping trip is announced, and all our main couples, along with their gang of friends sign up. As everyone leaves for the campsite, we get some more endearing moments. Except Bohn, who sulks because Duen is overexcited about the camp. But he can’t stay angry for long as he tugs a sleepy Duen closer.

Bohn and Duen’s relationship goes through a major upheaval in Episode 13. While at the campsite, Duen unknowingly wears the same shirt as Frong, which just needles Bohn’s insecurities, pissing him off. I don’t understand this character’s passive-aggressive behavior. He keeps getting annoyed over small things of no consequence, and I’m confused as to why a strong character like Duen puts up with his insecurities.

Bohn acts like he is angry and goes for a stroll. But Mind catches up to him and tries hard to get Bohn to break up with Duen. Duen watches from a distance and misunderstands the situation. Bohn, on his return, adds no value to the situation by lying to Duen.

Bohn makes the situation even worse by sleeping with Tee in his tent instead of with Duen, as he should. Duen is left alone in the tent, crying with no one to comfort or console him. The next day, he actively ignores Bohn. On King’s advice, Bohn goes to talk to Duen, and finally, they have a showdown. Duen breaks up with Bohn and leaves. Cooper Patpasit portrays Bohn’s arrogant, insecure nature, and shows the devastation his character is finally forced to experience well. Bohn is also childish and immature, and Cooper shows it well. On the other hand, Poy Kritsanapong, makes Duen even more believable as his character Duen is very assertive and although he has forgiven Bohn umpteen number of times, there will be no more. I’m glad that he took a firm stand this time.

Thara and Frong’s relationship was the major highlight of these lackluster episodes. Frong is pleasantly surprised when Thara joins them for the double date. He is adorably shy but enjoys Thara’s company. I really love the way this relationship is shaping up.

Thara can be pretty weird at times. Even though he owns a car, he turns up for the date riding a bike and even offers Frong a ride. Frong, although unsure at first, still accepts. When they reach the hospital, Frong and his mother are informed that the tumor is just a lump and can be easily removed. Frong feels grateful and hence invites Thara to join him for camping.

Thara brings his lizard for the camping trip. I can’t stop laughing whenever he does something like this. He is unfazed and unbothered about other’s reactions. I really appreciate how he enjoys every second without any doubts. I guess that’s the reason what draws Frong to Thara.

Thara, the photographer, gets an opportunity to take pictures of his favorite subject, Frong. Frong loses the necklace that his father gifted him, and Thara helps him. But they are unable to find the necklace. While a dejected Frong is sitting alone, Thara consoles him. They have a conversation where they share their memories and draw closer.

I absolutely adore this relationship. It started out slow with misunderstandings, and although neither of them is perfect, they are like the pieces of a puzzle that fit together. Frong longs for the patience and love that Thara displays. Frong, on the other hand, looks up to Thara, admires him, and even puts up with his weird ways. MD Nuttapong is doing a good job portraying Thara. His smile broadens the screen, and he has a strong yet gentle demeanor. Shane Nutchapol, on the other hand, projects Frong’s confusion and emotions quite well.

We didn’t get much of Mek & Boss scenes in Episode 12, except for both of them dressing in uniforms to make their offerings for the prayers they offered. Weird right, but Boss has Mek wrapped around the little finger, and he would give Boss the world.

They are adorably fuzzy even on the bus, and I can’t help being happy for them. Their journey from denial to acceptance was long and hurtful, but finally, they are together, and that’s what makes moments between them extra special.

Trouble in paradise. While on the campsite, Fon continuously messages Boss and tries to talk to him. Boss feels guilty and puts off talking to her. Even though they have their sweet moments the next day, Boss feels guilty again when Fon keeps disturbing him and even lies to Mek about it. I’m actually afraid for this couple. Their trust is too fragile. If it breaks, Mek won’t ever trust Boss again.

Ryan Peng and Inntouch Naphat are doing a good job portraying the onscreen couple Mek & Boss. I love how, despite the language barriers, both manage to bring the relationship alive.

Ram and King totally owned Episode 12 with their chemistry. They both take King’s nephews to the park, where they are challenged by the kids for a piggyback race. Ram is flustered, but King gets on his back, and while running, both of them fall down. They have a charged, passionate moment, and we can see how both of them are affected by each other’s presence.

Lying down on the grass, they have a heart to heart conversation where King tries to console Ram again. I love how King is always trying to get Ram out of his shell and making him smile. Dealing with an introvert like Ram can be difficult, but King displays lots of patience each time. Their relationship spells mutual respect and trust.

While Ram falls asleep, King hears some noise. He goes to investigate and finds a beggar hitting on a stray dog. King tries to defend the dog but gets hit on his head by the beggar. Ram arrives in time and saves King. King gets bandaged, and Ram is very nervous. He spends his time caring for King. King asks him about his body tattoos, and Ram explains patiently.

While Ram is slowly coming out of his shell, King decides to retreat. At the campsite, King is yet again injured and hits his head. Ram gets him out and makes him a flower crown. The moment is so surreal because King actually looks like an angel, and you can’t help but admire.

At night, they share a tent. King feels feverish, gets up, and walks to the Medical Aid Room. But he collapses in pain on the doorstep. Ram goes searching for him and takes him back to the tent. Seeing King shiver, Ram holds him close. King gay panics and lectures Ram on spending more time with his friends. The next day they spend all their time, stealing glances at each other.

I adore Ram & King. Mind you, they are not the conventional couple. Ram doesn’t speak much, but King somehow has managed to find a way to his heart. It will be entirely tragic if this couple breaks up in the Finale because I’m rooting for them to be together. Perth Nakhun manages to make you fall for him and has a strong screen presence. Talay Lay plays his counterpart perfectly. I have seen very few couples as perfect as them.

Like everyone else, I’m awaiting the Finale Episode with bated breath. It is going to be difficult and agonizing, thinking about the consequences. Let’s hope the Finale brings less unhappiness and more hope.