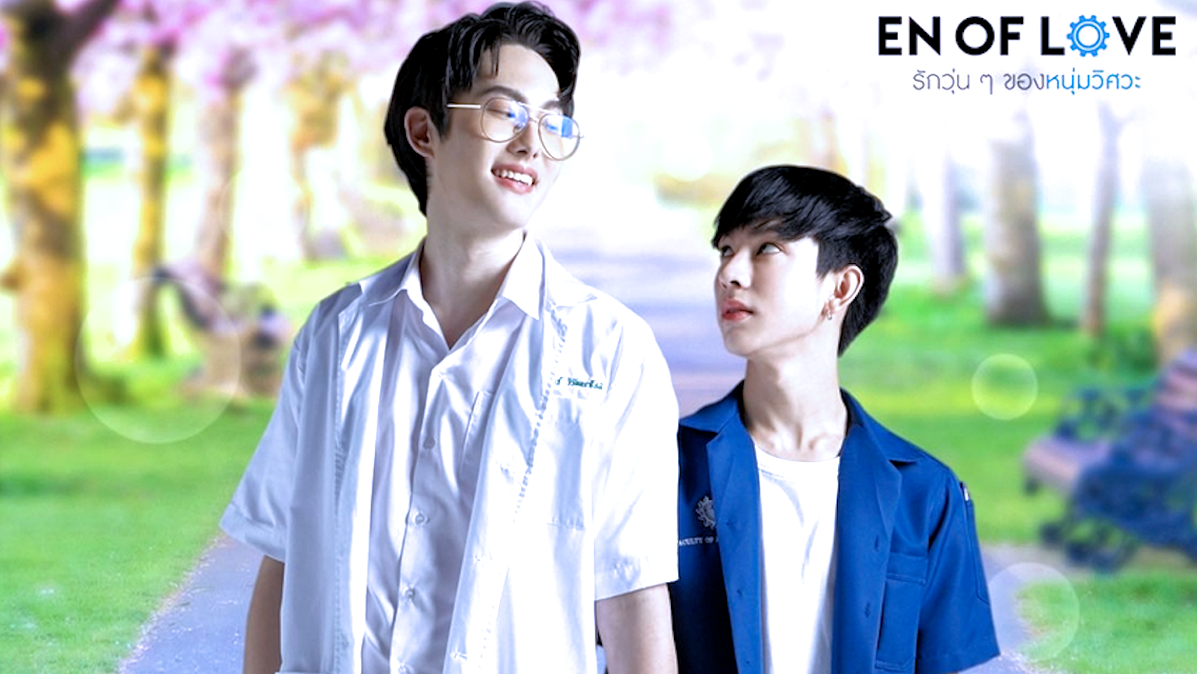 It’s about time for Gun (portrayed by Win Achawin) and Bar (portrayed by Folk Thitipat) to make their relationship official! In the previous episode of TOSSARA, the doctor and the head hazer have expressed their feelings toward each other as well as reaching an understanding of their current relationship.

However, the ambiguity of their status often gives a wrong impression to those around them, especially Mark (portrayed by War Wanarat), who remains aggressive in winning Bar’s heart. How will Gun respond to the situation? And will Bar finally accept the doctor’s proposal? Let’s find out in the third episode of TOSSARA as the story of Gun and Bar continues to roll!

The episode starts with yet another confrontation between Gun and Mark since the latter continues to flirt with Bar. Despite being repeatedly rejected, Mark is still determined to win over the head hazer. According to him, as long as they are not yet together, he is still entitled to court the senior. Mark’s comment leaves Gun feeling annoyed; he is about to pick up a fight with him when Bar coldly rejects his junior’s heart. He clearly stated that he doesn’t have feelings for Mark as he already gave his heart to Gun. (Don’t worry, Mark will find his ‘happiness’  in Love Mechanics)

I don’t want to waste your time. I like him, but I don’t like you. That’s the difference.

Feeling content with Bar’s confession, Gun decides to propose to the senior once more during the Freshy Star Competition. However, he loses his confidence after coming second in the competition. Feeling disappointed with himself, Gun abruptly tells the audience about his ‘long and winding road’ to the head hazer’s heart. Bar is surprisingly touched by the doctor’s sincerity. Carried away by his emotion, the head hazer confesses his true feelings for Gun, making him feel like he’s in cloud nine. The two lovebirds share a hug as they finally make their relationship official to the world.

I wanted to tell him how I felt six years ago. But I wasn’t ready. Now, I’m ready to tell him that I like him. I want to ask him to be my boyfriend. I don’t know if he will reject me again or not. If he does, I don’t think I can handle it. I like you, P’Bar.

After the public confession, they share some romantic moments together as a new couple. They talk about their old days as well as their insecurities about the future of their relationship. The episode ends with a sweet kiss and a promise to be faithful to each other.

TOSSARA episode 3 is definitely not my cup of tea; it’s so cringy, to be honest. There are too many ‘lovey-dovey’ moments between the main leads that are somehow unbearable to watch, especially that public confession scene. It was way too sweet for my liking. I do realize that it’s actually nobody’s fault, not the scriptwriters nor the novelist. It’s purely a matter of taste and preference. Thus, rest assured that this concern won’t affect my rating.

What I feel is lacking in this episode, surprisingly, isn’t the storyline. It is Win’s acting that bothers me. Despite showing improvement in the last two episodes of the series, he fails to deliver a convincing portrayal of Gun’s fragile personality in this episode. His crying scene doesn’t move me and feels like it’s forced. If compared to Folk, whose acting feels more natural and believable, Win surely needs to undergo more training and coaching to improve his skills, specifically in delivering an emotional and heart touching scene.

As for the script, I feel quite content with the way it’s written. Unlike the previous episodes that feel rushed and disjointed, TOSSARA episode 3 flows quite nicely without any illogical movements. It is also moving at a good and steady pace, allowing the viewers to enjoy the budding relationship of the main leads. So, congratulations to the scriptwriter for the remarkable improvement! It makes the story more entertaining!

One thing that remains consistent in this series is Folk’s acting as Bar. From the very first episode, he’s been able to deliver a strong performance in every single scene that involved him. His commitment and dedication to always give his best effort will take him far in his acting career. I hope that he will continue to improve and challenge himself with various roles and genres.

Apart from my distaste for the romantic scenes, I find this episode somewhat compelling. Win and Folk seem to be more comfortable with each other, making their chemistry stronger than before. At the end of the day, the ability of the main leads to convincing viewers with their acting remains the most important factor that makes the series popular among the BL viewers.