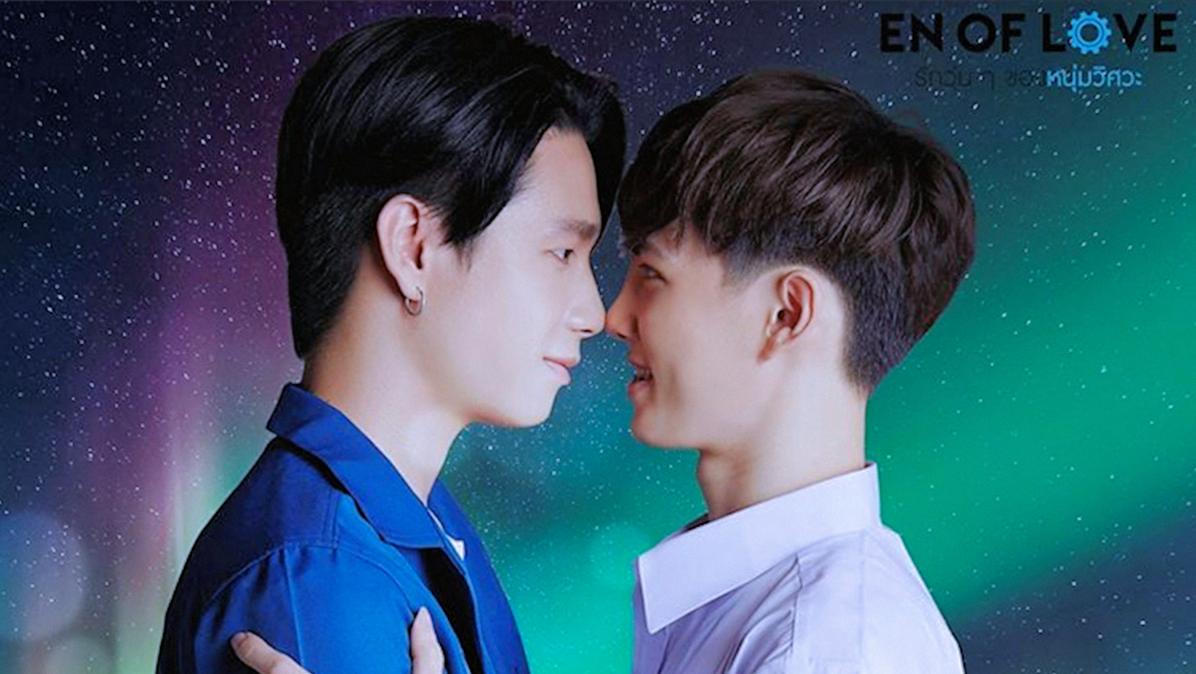 EN of Love – This is Love Story: Episode 3 – Finale [Review]

This Is Love Story final episode came as a surprise to the fans who have anticipated the continuation of Neur and Praram’s story for another two episodes. The shocking announcement which was dropped during the premiere of episode 3 trailer left the fans with one big question: How will they wrap up the story in just one episode left? Well, let’s dig into the review…

Although Neur (portrayed by Prom Ratchapat) and Praram (portrayed by Benz Natthapong) have constantly conveyed their feelings toward each other in the previous episode of This Is Love Story, their status remains unclear. Whether they’re a couple or just two people who flirt with each other, is a question that they need to answer. And that’s exactly what we get from the final episode of the series; clarity on the status of the main leads’ relationship.

The episode begins with a ‘heartwarming’ reunion of the Engineering gang as they collaborate to ruin Praram and Pralak’s tutoring time with Mark (portrayed War Wanarat). It’s Tee (Pharaoh Thamrong Cunpisut) and Lee (Saran Lek Davika) – the comedic duo – who repeatedly tease the lovebirds with their witty remarks. Unbothered with his friends’ comments, Neur shamelessly declared his love for Praram, which makes the younger one losing focus on studying. The situation becomes more chaotic when the entire gang joins forces to pick on the lovebirds, leaving Praram’s older brother, Gun (portrayed by Win Achawing), feeling annoyed. Aware of his brother’s feelings, Praram chose to remain silent as he doesn’t want to add to the tension between Neur and Gun.

However, Gun’s disapproval wasn’t the only obstacle to their relationship. The occurrence of Em (Karn Kasidej Hongladaromp) – Mark’s classmate in the engineering faculty – who was mistaking Praram for Pralak, arouses Neur’s jealousy. As Neur gets carried away by his anger, he subconsciously becomes sarcastic towards Praram, upsetting the younger one with his behavior. Seeing the changes in Praram’s expression, Neur decides to clear up their misunderstanding by revealing his true feelings towards the younger one and propose him to become his boyfriend. Astounded by the confession, Rama hesitates for a moment, before finally accepting Neur’s sincere proposal; giving them the clarity that they’ve been looking for.

Praram, I know that I’m not a good person. But I want to be good enough for you. If you like me as much as I like you, can I be yours? Will you take this naughty heart and take care of it? Teach me how to love properly. Will you be my boyfriend?

This Is Love Story ends with a grand birthday party scene where the entire cast of En of Love The Series gathers to bid their heartfelt goodbye to the devoted viewers.

This Is Love Story leaves me with a bittersweet feeling as I’m torn between my fondness of the series and my discontent with ending. The final episode somewhat doesn’t do justice to the whole series, which started out pretty well. I am fully aware of the pandemic situation and its effect on the production of this series. (I believe this is also the reason why they reduce the number of the episodes). However, I don’t think this excuse can be used to justify the poor execution of the final episode. Moreover, the production team has committed to producing the series despite all difficulties, so they must hold accountable for that by providing high-quality series to the viewers. And the final episode has failed to do so.

Unlike the previous two episodes, which were well written, the final episode felt rushed and forced, especially near the ending. I feel like some scenes were not necessarily needed, or at least could have been shortened as they don’t add any increased nuance to the story. For example, the opening scene where the engineering gang gathers together only to tease Neur and Praram seems drawn out, or could use a cut here and there. They could have reduced the jokes and focused directly on Gun’s annoyance of the main leads’ relationship, which was the main point of the whole scene. As much as I like the scene, I think it would be better to save the airtime for other important parts of the stories that can convey a better understanding of the storyline.

Another problem that bothers me is that the final episode feels a bit illogical, especially related to the tension between Neur and Gun. In the previous episode, we saw Gun’s irritation of the main leads, which continue until the beginning of the last episode, where he clearly showed his irritation towards Neur and Praram’s relationship. Nevertheless, this problem seemed to be disappeared into thin air throughout the second and third parts of the story. And out of nowhere, we can see at the end of the story that Gun is already accepting the relationship. I think we deserve a little explanation; what makes Gun accept the relationship so quickly and quietly? Why and when did he finally decide to make peace with the situation? For me, if they have raised the issue and made it as one of the major obstacles of the main leads’ relationship (throughout the series, you can see that Praram is clearly bothered with the situation), at least there should be some portrayal of the conflict resolution, to give some closure to the viewers.

That’s why I think that the whole series is sort of out of focus. With limited airtime and the decision to reduce the number of episodes, the production team should be more selective in choosing the plot points in the novel that they wanted to include in the series. They also needed to make use of their airtime wisely by reducing the number of unnecessary scenes that don’t give additional meaning to the narratives and focusing on giving more rationalization to the story. They could have offered a more polished series to the viewers who have been waiting for quite some time to watch.

Overall, I had a pleasant journey watching the series. The acting of both main leads showed a significant improvement with every episode, especially Prom. (He gets better and better in portraying Neur characters). Their on-screen chemistry also has been able to bewitch viewers as it becomes stronger and more convincing than the previous two episodes. On the other hand, the existence of the engineering gang and their friendship has become one of the main appeals of this series as they were adding more fun to the series. Apart from the scriptwriting that can still be improved, this series offers a ‘light’ and sweet story, which can be an option for those who are tired of watching ‘heavy’ and intense series. As we all know, the whole En of Love Series was meant to be a pilot project where all installment will be competing with each other. If This Is Love Story declares as the winner and will be made into a longer series, I hope they will improve the quality of the whole production so that it can become another more prominent series in Thai BL.

Rating: For the Series – 3 out of 5 stars [See our Review Guide]