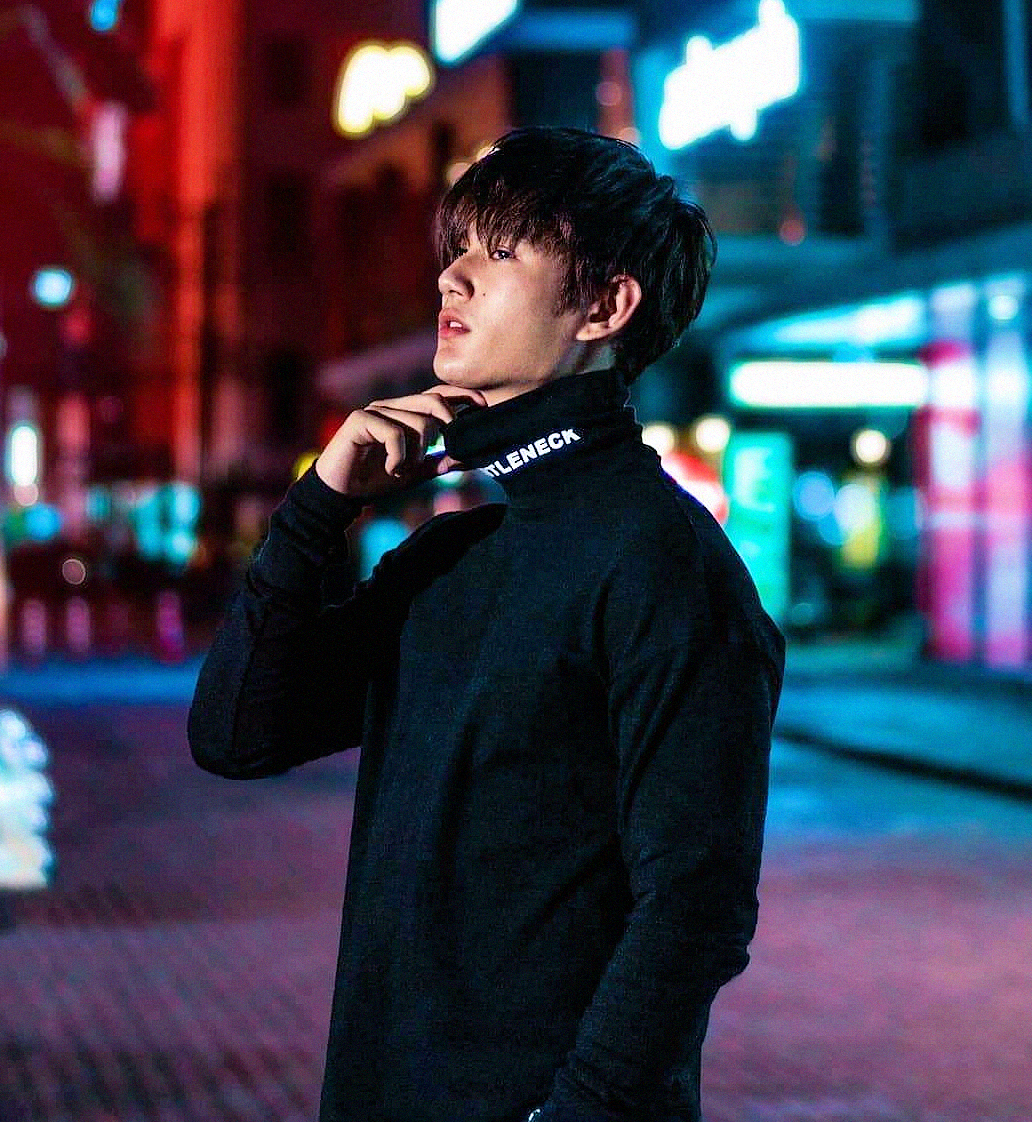 Pavel Naret Promphaopun (นเรศพร้อมเผ่าพันธ์) was born on May 6th, 1997) is a Thai actor, model, clothing designer, biker, gym enthusiast, and more. When I received this assignment, I was a little star-struck. How do you write the character profile of someone like Pavel. He is not just a person. Pavel Phoom is a PHENOMENON.

Pavel As An Actor

Pavel became popular for his portrayal of “Forth” in the drama series 2Moons2. He auditioned for the role amidst angry protests from the original fans of 2Moons Season One. They apparently were not happy at the second season being produced with an entirely new cast. When he was chosen as the character “Forth” by series Dir. P’Am Anusorn, Pavel stepped into the shoes of the popular Tae Darvid Kreepolrerk, a key member of the boy-band SBFive. Tae was the originator of the role, and comparisons were inevitable, but Phoom just spun those comparisons in his favor.

The character Forth is a sincere and a rather straightforward Engineering student. When Forth likes someone, he will try his best to win that person over. Pavel’s honest depiction of the role earned him a popular spot with BL fans as he made a strong impression right off the bat.

Forth’s initial interactions are with the character Wayo, whom he finds to be cute and audaciously wants to date him. Phoom’s performance as “Forth” in these scenes is so well done, with his natural charm and charisma, opposite Earth Teerapat’s “Wayo”, that some folks around the show wanted to subvert the script and pair of these two together.

Fans of 2Moons2 waited with anticipation to see the chemistry ignite with his shipped partner Dome Woranart Ratthanaphast, playing the character “Beam,” and they did not disappoint. The event even triggered the fan-creation of a hashtag on Twitter for the pair #PavelDoMe. The first hookup between these characters was hot as fire and made no apologies. They lit the screen up and got the audience further invested in their relationship. Pavel nailed the nuances of his character “Forth,” being aggressive, yet tender, as demanded by the role.

Getting these two series characters together in their story wasn’t an easy one. The plot required that Beam refuse to accept Forth’s courting him, and that Forth stick to his convictions of “I’m not OK with a one-night stand.” This scene showcases Pavel’s acting skills expressing his heartbreak and pain at Beam’s refusal.

In one scene, Pavel resorts to an unscripted moment, and the cute “sorry” uttered by Forth to Beam further illustrated that Pavel was the correct choice to play Forth in 2Moons2. BL fans loved the gesture, and just added to their affection for the couple. Additionally, Forth’s character profile calls for the actor to portray varied emotions ranging from disappointment, betrayal, angst to happiness. Pavel played each feeling with the conviction of a seasoned pro.

Apart from working in future drama series, Pavel’s ultimate dream is to work in action films. He would do well in a role of that type mainly because of his sculpted physique. It would be interesting to watch him in film action sequences. Pavel is also fluent in English and is said to have been a part of the subbing team for 2Moons2. His subbing skills are quite evident in the videos on his own YouTube channel, which is a major attraction for International fans.

When Pavel and Dome were cast as “Forth” and “Beam”, many questioned the validity of this decision. However, these two share a great rapport off-screen and their low-key chemistry is offbeat and unusual. It’s evident from appearances and videos that Pavel is very caring and possessive of Dome. A BL couple needs to be comfortable with each other and ignore the sadly negative notions about human sexuality. Pavel is quite open and honest about this subject, and the two of them are so comfortable in their own skin that it’s a common sight to see Dome sitting on Pavel’s lap.

Dome helps level out the level of craziness and chaotic energy that Pavel continuously exudes. Conversely, Pavel teaches Dome new things all the time. They seem perfect together and manage to be like Ying-Yang in some respects. They are both high on fitness with Pavel helping out Dome in improving his physique. See #PavelDoMe

In an interview segment with TEP, during the “lie detector” portion, Pavel stated that he had honestly developed feelings for Dome while filming the series. This revelation lit up the fan base for days after the interview aired. Dome is the only person who manages to make Pavel feel shy, and that’s a huge deal because Pavel is shamelessly unapologetic about most things.

Pavel As A Travel Show Host

#TravelwithPhoomDome premiered on February 12th, 2020. #PavelDoMe traveled to Phuket to enjoy the natural locales. As characteristic for Pavel, the entire episode was full of his flirtatious innuendos directed at Dome. He managed to bring a shocking exuberance that sometimes left Dome speechless and the audience very amused.

The way Pavel was able to insert light hearted moments between filming the local activities made the fans really appreciate his personality. They also loved the off-screen chemistry that the pair displayed consistently.

It is said that Pavel can always manage to shock viewers with his antics, and that’s precisely what happened throughout this episode. He is most charming at times, the rest of the time excited and, for whatever reason, extremely scared of zip-lining. This little fact got him playfully dubbed as “Baby” by his fans, instead of his usual “Daddy” image.

Audiences love their camaraderie and the hotness that they emanate scores highly as well. Fans are hoping there will be a Season 2 of this show.

Pavel As A Person

It is challenging to characterize just one trait when it comes to Pavel since he is the jack of all trades. He is currently pursuing a Bachelor’s degree in Communications Arts from Rangsit University. He has a totally versatile personality, with diverse interests. He is an ardent photographer, and you’ll need to check his Instagram to realize how really good he is. However, his favorite photographic subject seems to be Dome.

His love for motorcycles is well known, and he recently bought a $41,000 US (or 1.34Mil baht) Red Ducati after obsessing over it for ages. He loves the bike and calls the Ducati “Rose.” Pavel is also a fitness freak. He hits the gym often to cut down on what little body fat he has while attempting to build pure muscles.

When fans complained that he’d lost his “mochi cheeks” (implies that someone has soft cheeks and is used to refer to a cute person), he fired back with the sassy comment, “Mochi Cheeks won’t pay my Bills.” His father, who Pavel lovingly calls “Vin Diesel” joins his son occasionally on these fitness trials. The father and son duo set the fitness bar high, too high for some gym enthusiasts.

Pavel can be extraordinarily childish and entirely unpredictable at times. You never know when the conversation will head into an R-Rated diatribe. #PavelSquad viewers are likely to see him act very silly or shock them with verbal “zingers” just because he can. However, it’s those very attributes that makes his fans hold him in high regard. No matter what the subject, Pavel Phoom will ALWAYS speak his mind and will never apologize for it.

Do not underestimate this young man just because he plays the fool at times. Pavel is an entrepreneur as well. He is the founder and designer of an accessible street wear collection called Half Savage. With it, Pavel has reinvented clothing basics into a style that matches his own personality and fan appeal.

Fans unabashedly state that Pavel is credible with his style, and he expresses his thoughts in his designs for this line of clothes. Half Savage is popular because of this concept and also because Pavel does a great job of marketing with his own persona. It seems that he could decide to simply sell rocks tomorrow and people would still buy them.

Contrary to his public image, Pavel is still a Momma’s Boy. His mother travels with him a lot and has the same photographic skills that her son loves so much. Pavel also adores kids, especially his little nephew. All in all, Pavel is a family man. Fans are looking forward to Pavel reprising his role as “Forth” up and coming in 2moons3.