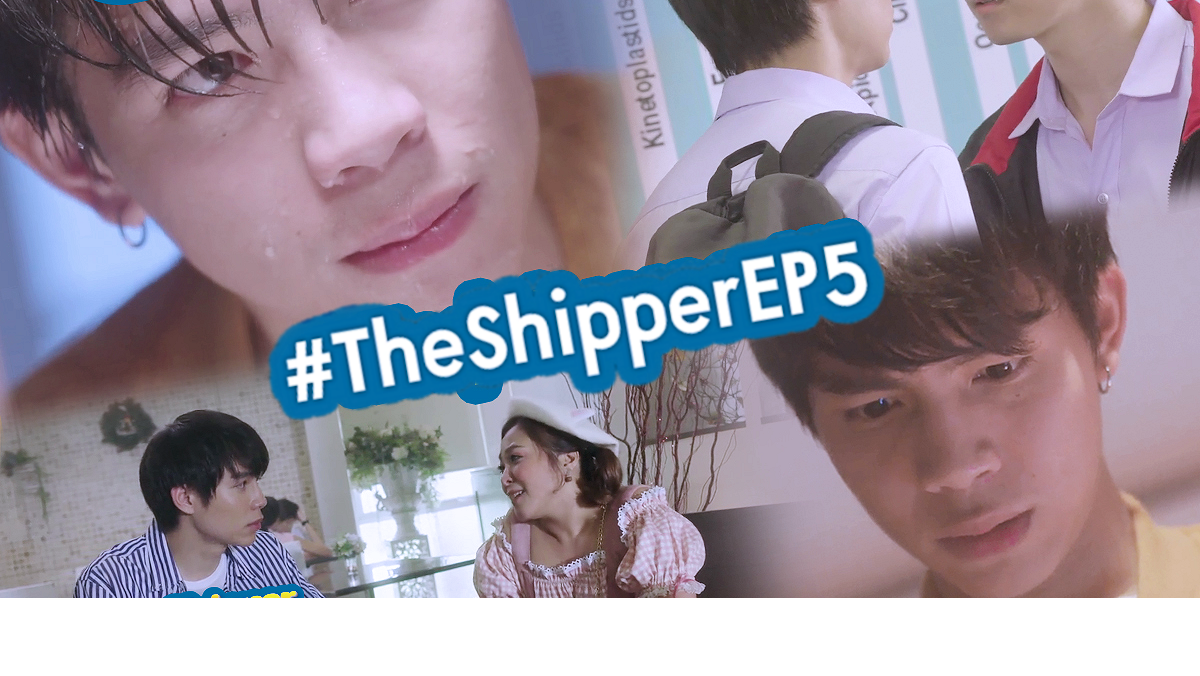 Episode 4 found Pan realizing first impressions are not always accurate.  Finally, she learns that you can’t judge a boy off how he looks, no matter how cute. In Episode 5, we see what she does with this information; however, remember this is Pan, so of course, you won’t be able to predict it.

Beginning with KimPan seeing that answers to exam questions are on the flash drive, KimPan has an internal monologue about whether P’Kim is really the culprit. By breaking a planter jar, Pan sees all the flash drives from previous year’s exams and realizes he has been stealing them for a while. We’re gonna assume he didn’t date his past teachers (let me have this delusion). Nope, we’re not gonna get that as we see in a flashback that P’Kim met Kana in 10th grade, and this relationship started then.

Obviously, this has a negative effect on Pan, who finally realizes being trapped in the body of her ‘ship’ subject is not as great as she thought it would be. Emotionally breaking down while remembering her cute moments with Soda praising P’Kim is heartbreaking to watch. The scene is well-acted by First, who plays a girl in a boy’s body very, very well.

First on KimPan’s hit list of relationships to destroy is Kana. Returning the flash drive to her at their date restaurant, KimPan is forced to listen to endless praise from Kana, which makes Pan feel worse. KimPan tries to make it soft, but there is no softening a break-up with someone who has been waiting for you for years, so he breaks up with Kana by threatening to expose them. It’s a well-acted scene and sad to see.  Let’s be real here; no one is sad over this.

Next on the hit list is P’Way. Now this one I did not want because the BBQ date in Episode 3 was so cute, and I love their chemistry. The scene shows P’Way waiting for KimPan with two tickets to BBQ and clearly wants to recreate that night. KimPan resolute in his/her plan, tears up the tickets before P’Way’s eyes. P’Way is visibly crushed by this, and KimPan’s words seal it that KimPan wants nothing to do with P’Way. To drive it home further, KimPan slaps him hard (crushing my ship). P’Way undeterred attempts to get KimPan’s attention, but KimPan ignores him. Finishing the test they are taking, KimPan tries to leave, but P’Way cares more about Them than class (GayDar just exploded) and blocks KimPan’s exit. To get away, KimPan tells the teacher P’Way is cheating.

The school is abuzz with the gossip over P’Way and KimPan, which brings us to Soda and a nice break from the drama. Soda’s fanfic believes the fight is overeating fried eggs with Soy Sauce vs. Ketchup. The answer is Soy Sauce; readers feel free to weigh in. But know that Ketchup is not ever a valid answer, sorry not sorry. The two boys in her fanfic have a super dramatic fight over this. I lost it when the mention of Rainbow Earwax occurred. This scene is so well-acted and hilarious. Thank you, BL gods, for this break from the drama.

But WAIT the words vanish as she types them because KimPan’s final mark on her hit list is the very ship that started this show. Soda fights back, typing faster than any human and but the words still vanish. She accuses Khet, who for once is actually sleeping and ignores her to return to sleeping. Whole chapters vanish, but Soda will not be kept from her ship and backs everything up yelling “no one messes with my ship” loudly while Khet bemused by her watches (give me this ship).

In the ‘re-sit’ (detention) caused by KimPan, Khet and P’Way have a conversation about KimPan. They place their exact same iPhones down and do their tests. I want to note comparing KimPan to a girl on her period is rude and sexist. After the test is over, P’Way realizes (by getting a brief view of the wrong phone) that Khet is in love with Pan. Meanwhile, KimPan flirts with Soda to get her phone and delete the rest of the fanfic. A chase ensues as KimPan deletes the fanfic. Watching this was soul-crushing, as Soda’s hard work gets deleted.

When done, Soda asks why and KimPan says to stop imagining things. KimPan explains that Soda shouldn’t believe P’Kim is a good person. Soda explains she is writing it for Pan. I am not gonna lie; I got a little something in my eye watching Soda explain her feelings about how much she misses her friend. Finally, we see how Soda and Pan meet; it’s cute, and we see how they become shippers. Singto and Krist are their first combined ship; there are even little nose bleeds (gross, not cute).

Soda declares that KimPan made it impossible to see her friend again. KimPan hugs her and says Pan is right here, and Soda bloody-nosed from hugging a boy passes out. Soda and KimPan sit and rewrite the fiction, and I’m confused as to whether she knows who KimPan is or not due to how it’s shot. This lack of clarity is a problem the show has in that it doesn’t always do a good job of portraying things. Afterward, KimPan goes to a church and thanks god for Soda and says the mistake has shown her this.

KimPan is yanked out of the church by Angel of Death, who is furious that KimPan was spilling the beans about the body switch. Of course, the Angel lied about finding god, but before that could be addressed, they rush back to the church because Soda is there thanking god for showing her that P’Kim is in love with her. Meanwhile, Phingphing and P’Way are out on a date. Phingphing is discussing the significance of having your lover’s picture set as your phone’s lock screen. P’Way thinks about this while looking at his own phone, as his lock screen is the selfie between him and P’Kim. The last image is that phone screen lighting up after a flashback stating just that.

My Thoughts On This Episode

This episode was weaker in writing than Episode 4 as it dragged on certain things. Slower pacing isn’t always the best route. It meanders off on tangents that can make it boring, and it did. Also, they returned to the original format of telling more than showing. It felt like my hand was being held, and I was walked through the episode. This show has a lot going on, and so many plot points can make the narrative a bit of a mess. First takes MVP this week with his amazing acting and ability to juggle multiple roles very well. But overall, it was just OK. I do enjoy seeing the gay awakening of P’Way from the first episode when he was crushed over P’Kim, not walking him out to bow when it’s clear he is in love with him. They are handing this very well, and I’m curious to see how it goes whenever Kim wakes up.