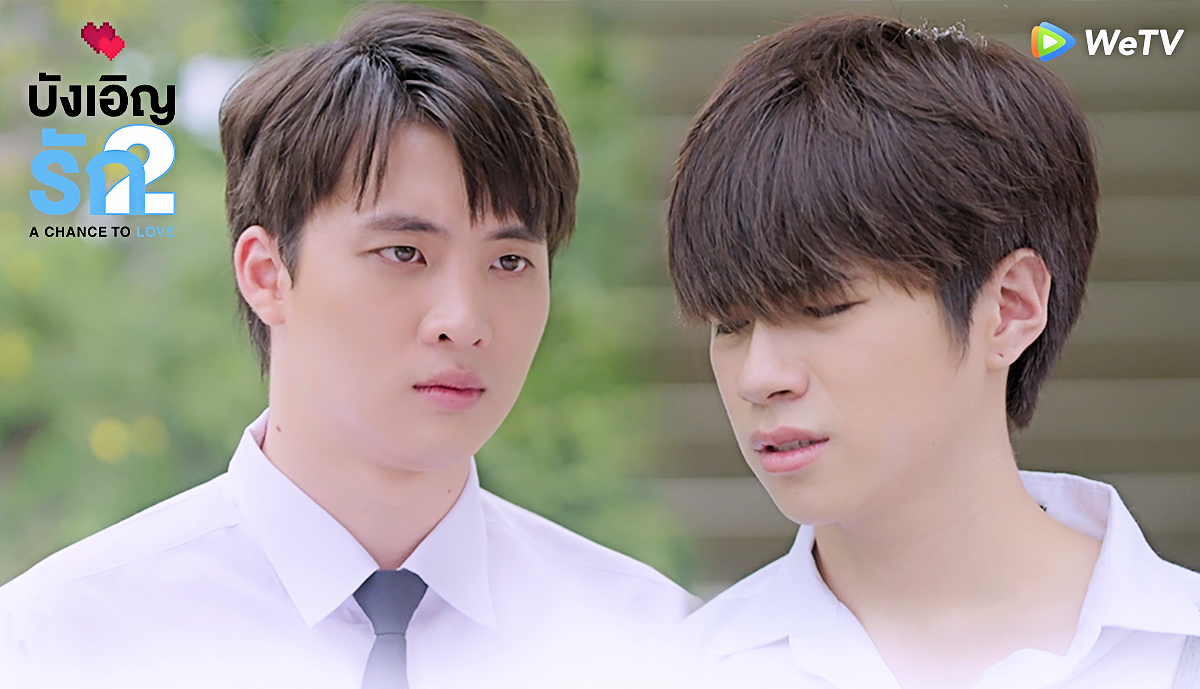 “Love by Chance” was my first experience with the BL genre, and although the show pretty much had a happy ending for our favorite couple Ae and Pete, the inextricable confusion thrust upon Tin and Can was indeed jarring. Although I thoroughly despised Tin’s arrogance along with Can’s gullible nature, they are a “match made in Heaven.” Their dynamics in Love by Chance was clear from the start, “Pretty Rich Boy falls for Pretty Idiot.” The season finale broke them apart when Can relegated Tin into the “Friendship Zone,” and Tin was emotionally distraught to the point that he attempted washing off the feeling under his showerhead.

Now knowing Tin’s nature and attitude, a sequel could have two possibilities for character development – one where he takes revenge on Can for breaking his heart or, secondly, treat him like dirt under his feet. I was even hoping for some groveling on Can’s part as well. Imagine my surprise when I sat down to watch the premiere of the “Most Anticipated Thai BL Series of 2020” and found that the show’s initial episodes are actually a reboot of Tin and Can’s entire relationship, concocted by the producers with assistance from the original story author Mame.
For those who are equally confused about the rewind of Tin and Can’s story, here’s an explanation from the book author Mame. She reportedly decided to revamp this version and showcase the new start of Tin and Can’s journey.

Watching the sequel is a frustrating task because I don’t understand the need to rewrite Tin and Can’s history. We watched Tin and Can’s journey from enemies to lovers and then back to strangers. So what is the use of rehashing ancient history? It seems like an absolute waste of our time and money as well as the actor’s talents.

This tweet by the author is even more confusing. In “Love By Chance,” while Ae and Pete had just begun dating, Tin and Can met simultaneously under inadvertent circumstances. So the timeframe change in the sequel doesn’t make a great deal of sense. Because now we have Ae and Pete having already broken up while Tin and Can are just in the initial stages of their relationship, in fact, just now meeting each other. To portray Ae’s character in the present while Tin and Can’s in the past is so confounding. It’s like following parallels from two different timelines, which leaves you with more questions than answers — even Star Trek’s new “Kelvin Timeline” alterations to canon made more sense than the story changes do here.

“A Story of Bargaining Relationships” – A Chance to Love focuses on the dynamics between the three main couples and how they find love under the most unlikely circumstances. We follow Tin’s journey as we learn more about the unseemly equations within the rich family and the resulting mistrust that he carries around like a shield. Will his new friendship with Thai program student Can break down those walls? Ae, on the other hand, is a broken shadow of his prior cheerful demeanor. The loss of Pete has shattered his confidence and liveliness to be replaced with rudeness and ambiguity. Will the two people who love each other ever meet and reconcile? Meanwhile, Techno is hiding behind the shadows with the new feelings that surface from his nonconsensual tryst with Kengkla. Did he really enjoy the sex so much that he is ready to forgive Kengkla’s grave mistake?

My Opinion About Episodes 1 and 2

I absolutely loved the opening scene of the pilot episode. Even though Can is crying ugly tears and being conspicuous, Tin’s caring nature piques your attention. It’s been almost two years since the prequel and Mean Phiravich’s acting talents have improved. While Plan follows up on his act of being somewhat dense and shallow, it is Mean’s controlled portrayal of Tin’s expressions that set the bar higher between the two of them. I was also surprised by the naughty glint in Tin’s eyes when Can begs him not to disappear again. I wish I knew what was going on in his head in that split second when Can expressed his feelings. Despite that, I love this softer version of Tin, who smiles more and consoles Can despite their ongoing disputes. Maybe we are thinking about the prequel where they apparently broke off and imagine that this is their reconciliation.

And that’s where the mirage breaks, and we are thrust into this parallel universe where Ae and Pete have broken up while Tin and Can haven’t even met. I might have screamed and startled my family members. Imagine going through the hassle of watching Tin and Can fall for each other AGAIN! While I was still recovering from the storyline switch, we are shocked by the stunning impressions of Ae. Perth has perfected his act of “Angry Young Man,” and his demeanor screams, “stay away from me.” To watch a confident character like Ae being reduced to such negativity made my heart ache. I understand he is suffering from heartbreak, but that doesn’t explain this switch in his personality. I’m guessing there might be another explanation for his aggressive attitude.

Tin and Can’s confrontations are pretty hilarious. The differences are so glaringly obvious, and yet the nuances are more defined in this sequel. I enjoyed Tin’s surprise when Can declares that he doesn’t know who his father is. The attitude is quite different because Tin doesn’t lash out as he did in the previous season. He is also quite patient when Can unknowingly spills drink on his shirt. While Mame hasn’t changed Can’s character graph, Tin’s new version is more soft and vulnerable. Yet, his hackles get up really fast when confronted by his elder stepbrother Tul. Tul is a contradictory character. At first glance, you notice how handsome he is, but then the guy opens his mouth, and you realize what a asshole he is.

While the show majorly focuses on a shift and reimaging of Tin and Can’s romance, Ae’s heartbreak also gets some preference. We are treated to saddening visuals of Ae reminiscing his sweet moments with Pete and being entirely oblivious of the people around him. I’m still trying to understand the reason behind their apparent break up because the author’s narrative is obscure here. Her efforts to build up probable tension are failing because it is just painting Ae in a negative light. Ae is certainly not the kind of person to manhandle a woman, and his distraught behavior is heartbreaking (because of Perth’s improved skills of expression) yet confusing (because of a poorly thought out script.) Pond’s insistence that Bow doesn’t know their issues seems to appease him to a certain extent, but why is he so far gone that anger is taking control over his mind?

Tin’s second chance meeting with Can is even more contrived. Trying to save Tin’s classmate from his angry response seems like the right thing to do. But unknowingly, that puts Can on Tin’s radar. The fact that he is warming up to Can is surprising because it seems too fast. Granted that Tin isn’t being ‘straight’ with his affections and hence disguises them with his daily dose of insults. However, those are mild when compared to Tin’s arrogant attitude. He is not outright hostile, and that’s quite shocking.

Since we are comparing histories, how can we miss out on Tin and Can’s first kiss? The situation is almost similar, but the feeling is different. While in the first season, Can (actually Plan) did a great job imitating a dying fish while being kissed for the first time. In the sequel, he actually emotes just a touch. The cacophony of emotions on his face of shock, surprise, and ‘something more’ pay off well. Tin’s method of shutting up Can from spouting nonsense is pretty funny. I mean, how many people go around kissing their enemies? No one unless you are Tin Medthanan and you love confusing your rival! Also, Can’s insistence on poking his nose in Tin’s affairs is yet another mystery. He has just met the guy but loves to lecture Tin on the ways of the world. As I said, they are an unlikely match!

To be entirely honest, I’m equal parts disappointed and amazed by the show’s premiere. In some places, the drama lags, and then you wish they would get on with it and move forward instead of backward. I have huge issues with the reboot of Tin and Can’s romance. I’m guessing the author wanted to soften the edges. I would have preferred if it was done for one or two scenes, which played as flashbacks and not the entirety of the episode. I’m not interested in walking down the memory lane. I’m more intrigued about their present and future. How will they reconcile? Also, Techno’s story is pretty much sidelined, and the little glimpses we catch don’t paint a pretty picture. I’m hoping that they don’t drag out Ae’s anger issues, and we get some closure or answers.

“A Chance to Love” airs on WeTV every Wednesday, and VIP users are treated to an extra episode per week. (In case, you can’t access the video due to regional unavailability, you are advised to use VPN)

Keep watching this space as we bring you more updates from this sequel!