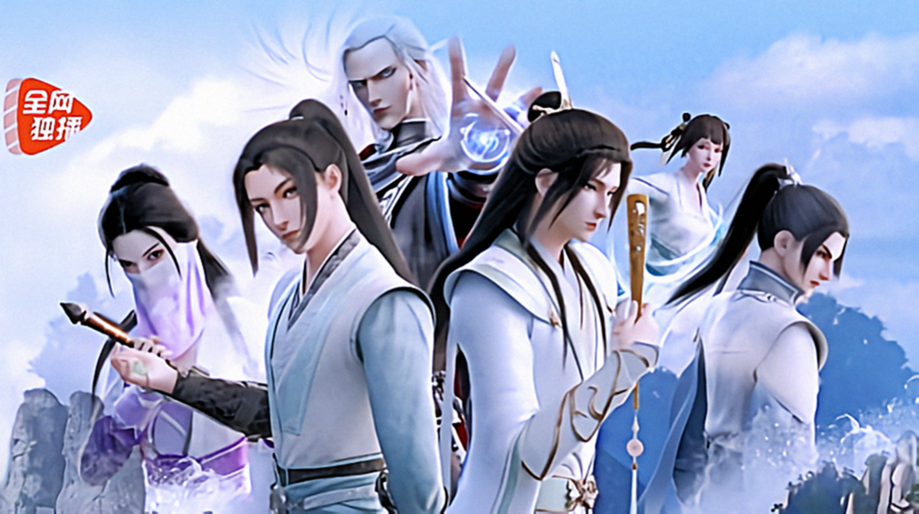 Scumbag System is moving at a steady speed, now that the characters have been established, and the troll system has decided their course of action. I’m actually quite intrigued by the author’s mindset while writing this storyline. Helmed by Mòxiāng Tóngxiù, who wrote the phenomenal “Grandmaster of Demonic Cultivation” (adapted into the globally popular “The Untamed” series), “The Scum Villain’s Self-Saving System” is pretty much set in the same universe where we have powerful cultivators fighting the evil forces. As such, I found myself comparing both the sagas even though they have different characters, albeit similar in nature. The only similarity that strikes out is the quirky nature of main lead Shen Yuan (Shen Qingqiu) with Wei Wuxian.

I’m guessing Mòxiāng Tóngxiù enjoys creating characters who have a biting sense of humor coupled with incomparable cultivation powers. They are largely misunderstood and often perceived as villains, while in reality, they are just gentle souls searching for love and understanding.
As the story progresses in this episode, we experience the troll system’s apparent animosity with Shen Yuan’s love life. It keeps deducting points every time he tries to get into Luo Binghe’s good books.

With such a major deterrent, how will these two lovebirds unite and change the predestined fate? Will Shen Yuan complete the quest to give a better ending to this dystopian alternate reality, in which he has inevitably landed? Most importantly, does this alternate universe exist, or is it a figment of Shen Yuan’s fertile imagination?

While Shen Yuan comes up with different ways to protect Luo Binghe from his unruly disciple Ming Fan’s bullying, the troll system seems hellbent on foiling his attempts with random point deduction. In the meantime, Senior Yua Qing Yuan arrives to remind Shen Yuan about his visit to Shuanghu Town. Yuan finally deduces that Qing Yuan is the system’s “Quest giving NPC.” Left with no option, Shen Yuan decides to travel to the town to figure out the serial skinning murder case. On the way, both Shen Yuan and Luo Binghe experience some moments of unbridled companionship. When they arrive at Shuanghu Town, they are surprised to find that the Skinner is actually a Demon. However, Shen Yuan and Ming Fan’s plans to eliminate the Demon face a major setback when the Skinner kidnaps Ying Ying. The Demon successfully lures Shen Yuan and Luo Binghe to the Chen’s mansion and traps them.

The episode starts with Ming Fan bullying Luo Binghe. I’m not a huge fan of this character as he enjoys torturing the sweet Binghe and most probably was one of the reasons why Binghe turns evil later. Despite that, his rapid attempts to antagonize Luo Binghe bring out Shen Yuan’s protective instincts. Shen Yuan’s ballsy excuses that he is indeed trying to protect Ming Fan’s future so that Luo Binghe doesn’t avenge him later will make you laugh. It’s totally “OCC” (out of character) for Shen Yuan’s core characteristics. He is kind as well as caring, and acting like a cold-hearted bastard doesn’t come naturally to him. It was interesting to watch him battle his inner instincts as he finds Luo Binghe’s lost Jade Pendant. The parallels are so surreal, where Shen Yuan walks away with the jade pendant in his hand while Luo Binghe tightly grasps the green leaf, which magically shielded him from Ming Fan’s attack. His adoptive mother’s jade pendant was close to his heart, and it irks Binghe that he lost it. But instead of that, he now draws comfort from the leaf, without realizing that Shen Yuan was protecting him.

Shen Yuan’s troubles never cease to end. He is basking in delight because the system awarded him 150 points for obtaining a collector’s item like the jade pendant. When his Senior Yue Qing Yuan arrives to remind him about his descent into Shuanghu Town, it’s hilarious how Shen Yuan attempts to reject the quest, and the system unceremoniously retracts his option. The entire universe is scheming against him. The main highlight of this storyline is the constant bartering between Shen Yuan and the troll system. Like when he complains about traveling in a carriage, the system safely reminds him that in this universe, magical broomsticks don’t exist, and Shen Yuan counters back with teasing the system. They are always at odds with each other, or it’s actually funny watching the protagonist respond to a troll system that magically appears out of nowhere. The poor guy is nowhere close to winning against the this system.

That brings us to the next scene, which is my favorite. Ying Ying complains about Luo Binghe being bullied by the disciples on their way to town and requests Yuan to help him. Instantly Shen Yuan asks Binghe to accompany him in his carriage instead of running on the road. This is again “OCC” (out of character), and while the troll system jumps at the chance to deduct his points, Shen Yuan shrewdly counters the attack by pointing out that Ying Ying is Shen Qingqiu’s favorite disciple and he would surely follow her request. It was actually surprising that the system accepts this lame explanation and doesn’t deduct his points. Shen Yuan would probably do cartwheels if he weren’t in a running carriage.

And thus begins the most awkward journey where Shen Yuan pretends to meditate, and Luo Binghe is sitting there looking anxious. I’m guessing this is the first time that Shen Qingqiu has shown him such generosity, and Luo Binghe is pretty confused with his Master’s behavior. It doesn’t help that Shen Yuan throws a medicine bottle towards Binghe, rather callously and orders him to treat his wounds. Again it’s “OCC” (out of character) regarding Shen Qingqiu’s character, and Shen Yuan quickly redeems himself by lying yet again. But the lie seems to comfort Luo Binghe, and he smiles at Shen Yuan. Yuan is so stunned that he smiles back, and that’s when the troll system gives the “Smile Violation Alert.” I pretty much rolled off laughing. Trust the troll system to spoil Shen Yuan’s love life. I can’t believe that it slapped him with petty “Smile Violations.” The troll system is not going to make their romance easy.

The motley group of cultivators arrives at the Chen’s Mansion in town. It seems that the serial killer Skinner is obsessed with killing and skinning young, beautiful women. Shen Yuan asks Ming Fan to handle the case. I questioned his decision because, so far, Ming Fan hasn’t shown any discernible skills of a cultivation discipline. So when he walks up to a ghastly grave outside the town and performs the correct technique to deduce the culprit, I was actually stunned. It seems like he is a good disciple despite having a very bad character. As he reports his findings to Shen Yuan, they discuss tactics to defeat the Demon. This time however, behaving in direct contrast, the troll system appreciates Yuan’s efforts to mimic Shen Qingqiu’s behavior. At this point, I don’t know whether to laugh or cry at their antics.

Ying Ying leads Luo Binghe to the town, but unfortunately, they are attacked by the Skinner Demon. Despite his young age, Luo Binghe valiantly fights the Demon, and you finally realize why he is the protagonist. He tries hard to save his Shijie Ying Ying, and for some reason, that reminds me of Wei Wuxian and Yanli. Yes, this pair isn’t that close, yet Ying Ying is his protector, and seeing her fighting for life pretty much scares the young kid.
The Demon vanishes with Ying Ying and Luo Binghe rushes to get help. As usual, Ming Fan uses this opportunity to berate him, and Shen Yuan has to hold back from disciplining Fan. Luo Binghe is terrified and lost, and Shen Yuan battles with his inner need to comfort the kid. At last, keeping with Qingqiu’s character, Yuan rushes out to rescue Ying Ying, so that he doesn’t end up offering physical comfort to Binghe.

They both follow the trail left behind by the Demon and shockingly end up in front of the Chen’s Mansion. As they are about to strike, the Demon materializes and knocks them unconscious. The turn of events was interesting and scary. Shen Yuan miscalculated the Demon’s strength, and they are now at a major disadvantage. I’m pretty much invested in this anime because of the constant tug of war that Shen Yuan faces. His need to comfort Luo Binghe is at odds with the troll system’s constant warnings. You cannot change your basic nature or character, and it will be intriguing to watch how Shen Yuan batters or outmaneuvers the troll system. The show ended on a cliffhanger again and left me with major questions instead.

Will they figure out the true identity of this demon and its incessant need to skin beautiful women? How will they escape from its clutches and save Ying Ying as well? Will this tragic encounter bring the Master and Disciple closer? How will the troll system react in such circumstances?