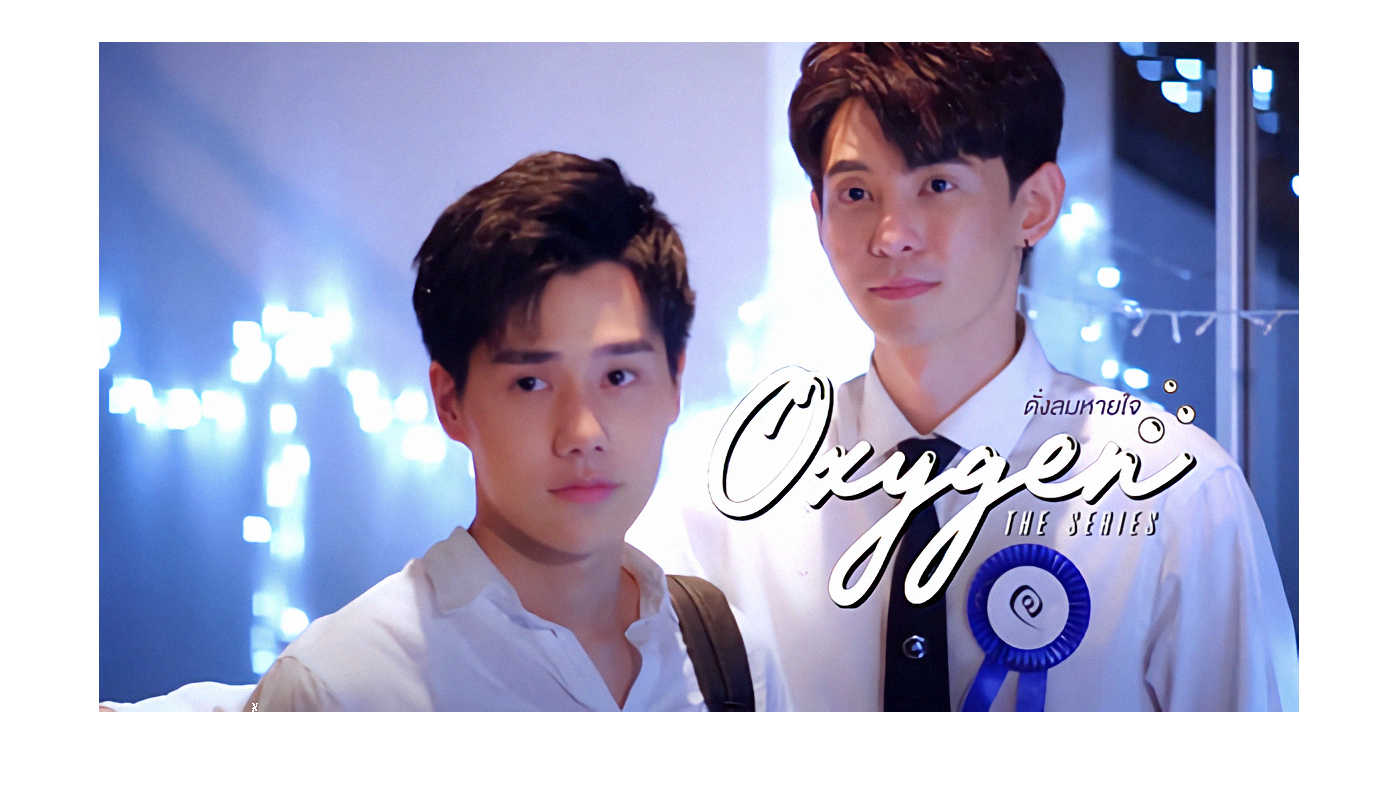 It’s just the second episode, and “Love is in the Air.” Although I have been hearing many complaints related to Nut Supanut and Petch Chanapoom’s apparent “wooden expressions.” We need to consider the fact that both of them are newbies. Despite that, they try to portray a poignant relationship based on mutual understanding where they manage to convey their emotions with simple and silent conversations. They don’t need to talk much because their eyes vividly describe the character’s emotions. So that pretty much sums up Solo and Gui’s budding feelings for each other.

This review is a joint effort with Jenhg. See her thoughts on this episode at her blog. Jen’s perspective is different from mine, and I really enjoy reading the contrast in our thought processes. I’m hoping that our readers will feel the same.

In my personal opinion, a romance should be a slow burn process and wrapped in a warm intimacy that outlasts physical contact. Yes, I enjoy sensuality, but at times I want to feel the sweet and shy connection between the characters. I’m hoping to see the build-up of this relationship. With that being said, the second episode pretty much picks up from where the pilot episode ended. Solo and Gui are just working on their new connection, while Phu tries hard to resist an adorable Kao. While our main leads are on the way to falling in love, the show suddenly delivers us right into the midst of a new love triangle – Dr. Perth, Dr. Petch, and our very fujoshi Khim. I’m still trying to get over this shocker. While the episode has it’s own strong points; it was a little slow-paced. Nevertheless, I enjoyed watching the chemistry brewing between our main characters.

While Gui is having doubts about attending the Freshy Contest, our fujoshi Khim gives him a nudge in the right direction. Solo and Gui are enjoying the daily night rendezvous that is giving them the chance to get closer. New relationships often get plagued by problems, and Solo tries hard to hide his jealousy when he sees Gui get closer to others. It’s adorable and yet gives us a silent glimpse into his innate personality. On the other hand, Kao is trying his best to earn Phuri’s trust and affections. For the most part, his efforts seem to be working as Phuri’s heart is slowly melting for his “bugs bunny.” The show has also set the center stage for a love triangle between our handsome doctors Petch, Perth, and Khim. Granted, Khim gets caught into this whirlpool unknowingly, but the consequences could be pretty disastrous.

Will Gui accept Solo’s affections and become a part of his world? Or would their growing romance be stopped by someone close to Solo? Will Phuri someday accept his affections for Kao? What will happen to Dr. Perth if his love interest Dr.Petch falls for Khim instead?

Life is pretty hilarious when you have one determined fujoshi working overtime to sail all the BL ships in her show. Khim is beautiful, loud, and quite manipulative when it comes to pulling strings. The way she steadily convinces Gui into attending the Freshy Contest and also manages to confuse Dr.Petch about his own sexuality left me speechless. She smacks Petch on his head with the “BL” tag and leads him to believe that he is “gay for Dr. Perth,” which could leave you bewildered. This fujoshi is one of a kind, and like every other reporter who specializes in their field of work, she is top-notch. Khim won’t stop unless she has got all her ships paired together and sailing smoothly. She is on par with the “The Shipper” duo Pan and Soda, so heaven help the BL couples in this show.

I pretty much live for Solo and Gui’s nightly rendezvous. They are so sweet and adorable with a hint of shyness that I love watching them interact cocooned in their private safe-haven. Especially in the moments when Solo requests Gui for permission to call him “Guitar.” Gui readily agrees, no questions asked. He understands that his small concession would bring solace to Solo and his ready acceptance is so heartwarming. Also, the subtle play of emotions when Gui wipes the froth from Solo’s lips, and Solo adds his hand to the contact. They could spend an eternity staring at each other, and I would never get bored. Their relationship isn’t defined by overtly sexual gestures but simple ones like these.

Now our cutie pie Kao and his budding romance with cold-hearted Phuri is still a work in progress. What do I love about them? Kao’s zeal and enthusiasm when it comes to fighting the roadblocks on his way to Phuri’s heart! He won’t give up so easily, and that astonishes Phuri. I’m sure he has never met someone like Kao before because he is used to ordering people around, and Kao’s defiance confuses him. But the attraction is there, and you can see his heart is thawing for the “Bug Bunny.” I was surprised when Solo explains that Phuri likes rabbits. Unexpectedly he paints Phuri’s face with a bunny, which is a testament to his growing affections. Despite his constant refusal, Phuri actually finds Kao adorable. It is not going to an easy journey because Phuri doesn’t seem the type who trusts very easily. Kao will face a lot of struggles, but true love is totally worth it!

Watching Solo get jealous over anyone or everyone trying to get closer to Gui is my favorite deal! He follows Gui around like a lost puppy, driving to him to a store located in an off province, and then uses his influence to get them out of stock flowers. This shows that Solo is at the deep ends with Gui. I don’t think Solo has done this for anyone before, and Gui is certainly his special person. Also, he is like a wolf, marking his territory. The way he scares off potential love interests is amusing. The death glares to other possible suitors are hilarious, and Gui might find it confusing.

But Solo has pretty much decided that Gui belongs to him. Hell hath no fury to those who want to separate him and his love! I especially loved this scene, where he tries to replace the meaning of Lily with his special signature. The words are deep and meant to make Gui realize his importance in Solo’s life! It might seem lackluster, and I understand why their expressions are being tagged as “Wooden.” But for some reason, I enjoy these intense stares that they have mastered.

The jealousy tirade isn’t over yet as Solo yet again gets miffed watching Gui comfort his junior. It’s funny to watch him act like a spoiled school kid whose favorite toffee got stolen. But I appreciate Gui’s maturity because this relationship won’t work if he didn’t take things in stride. He understands Solo’s insecurities and soothes the pain, nevertheless, becoming the silent support that this rich lost boy needs. Their social standing might be different, but when it comes to love, money doesn’t define your feelings. It is graded by how much effort you put into know each other and stand beside the one you love.

Let’s move back to our fujoshi, who isn’t quite done with wreaking havoc on Dr.Petch’s mind. I’m still trying to understand why he goes through all the tricks she conveniently pulls out of her ass. Either he naively believes her ridiculous notions or is really interested in learning more about Dr. Perth’s feelings for him. But that couldn’t be the truth, because he seems happy when the tests fail, and it’s clear that Perth isn’t “in to” him.
I admit that Perth is a really good actor because he manages to hold off his emotions, which is commendable. His inner turmoil doesn’t show on his face, although it’s obvious he is attracted to Petch. Why he chooses to keep his feelings hidden is unknown. But this constant denial has now paved the way for a “Petch & Khim” unlikely romance. I was not expecting this shocking turn of events. For some reason, this reminds me of the failed relationships in “The Shipper,” and I’m not looking forward to a reboot. I’m hoping the confusion clears sooner than later, and Khim manages to get her fujoshi act together. Or else, this love triangle will end badly.

That brings us to the end of this episode. It’s a known fact that the main lead always wins the contest—no prizes for guessing that. But Solo managed to go beyond that and win Gui’s heart. We finally do get to hear their earlier conversation, and it is pretty much a confession. The way he relates his feelings of happiness to Gui spells out his love in bold letters. There is no confusion anymore – Solo has fallen for his adorable Barista!

While Phuri spent quite a lot of time resisting Kao, he can’t keep fending off the cute bunny’s constant efforts. I’m totally invested in this relationship, simply because they are such an intriguing match. While Solo and Gui are more accepting of their feelings, Phuri is more prone to deflection. He enjoys Kao’s adorable antics, but surely this isn’t love. However, when you have one determined human hellbent on winning your heart, how long can you resist? Phuri will fall sooner than later, and I will be there to watch the glorious resulting romance.

Because knowing Kao, it will surely be an out of this world experience. Kao’s emotions are always on the surface, and his innocence is refreshing. He doesn’t mince words, and when he sets his mind on something, he doesn’t rest until he has achieved his goal. The goal, in this case, “Phuri,” cannot escape, and I can already see the cracks in his rude demeanor armor. Here’s hoping that next week’s episode has some sweet moments sprinkled with more clarity on our main lead’s blossoming relationships!

As promised earlier, Psychomilk brings you some snippets from the Special Scenes on Roger Films Facebook page, only available for their supporters. You need a VIP pass to watch these scenes, or you have to wait until they are broadcast on the Mauve Series YouTube account three weeks later. We also have some BTS from Gui “Petch Chanapoom” Instagram posts.

The cast of Oxygen The Series had their first official press tour meet on September 15th, 2020. Here are some more pictures from the event where the actors interacted with the media and their fans.

Keep watching this space for further updates as we bring you more exciting news and features related to this sweet romance!