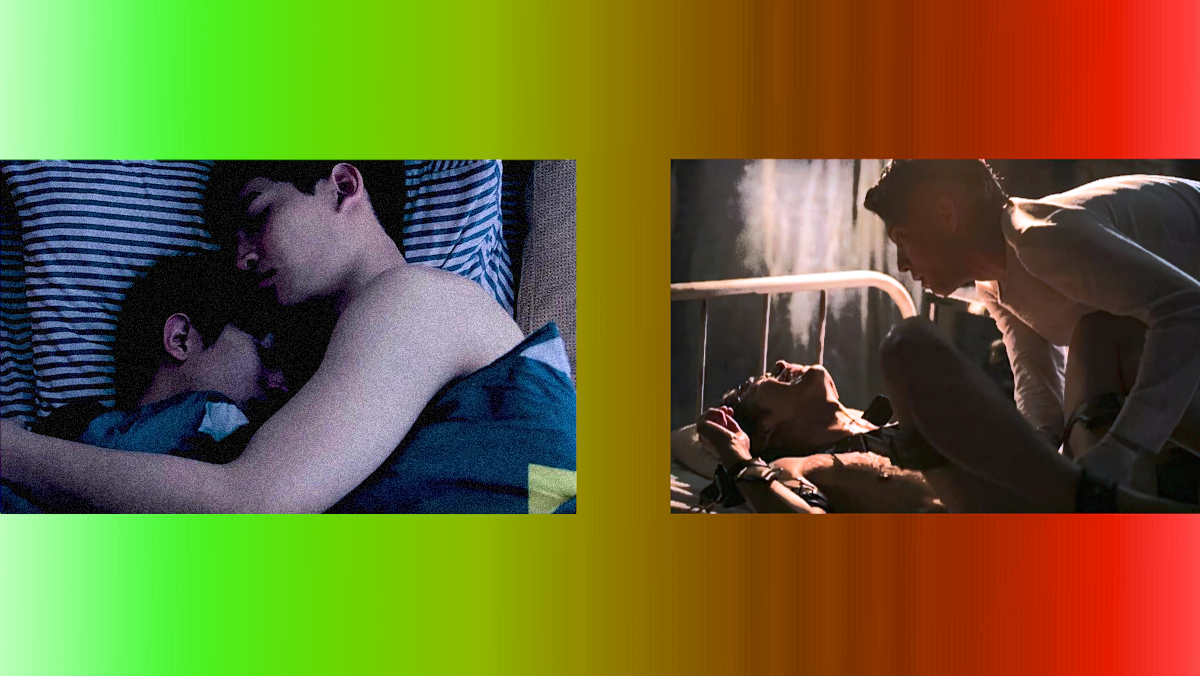 Everyone remembers their first BL. Whether it was “Love by Chance,” “Lovesick,” or “SOTUS.” Or if you’re younger, maybe “Slam Dance,” “Together with Me,” or “Tharntype” the Series.” Whenever you started your activities as a viewer, you have fallen in love with college or high school settings. First loves or the main lead only being gay for one special person. Those staples are common in most ‘Boys Love’ series. But what happens when you venture off the YouTube yellow brick road of suggested videos?

You download one of those Asian streaming apps and find yourself in an unfamiliar and more adult world of cinema. Typing in “Boys Love” doesn’t work, so you click a video and see more than you thought you would. What’s the difference between Boys Love and Queer Cinema? Is there one?

Shows like “Tharntype” or “Where Your Eyes Linger” all have a pattern of almost like a checklist of things in them that make them BL (Boys Love). A school setting, whether it’s a high school or college. First loves and inexperienced men who were straight before they meet that one guy. A crew of slightly attractive friends and or family. But what they don’t have is extreme amounts of violence. Full frontal nudity is something you won’t find in most BLs though you’ll occasionally see a bare butt. The stories and writing also have a formula to them that keeps them to an extent safe. By “safe,” I mean you won’t see national conflicts, things in one culture another might find offensive.

The essence of a BL is in the name; most are geared towards an almost ideal romance between two model-level in looks attractive men. Most I’ve seen in recent years either sugarcoat the coming out experience or bypass it altogether. As part of the formula of a BL show, it works. Most people don’t want to see the uglier side of the experience. We also have to remember that these shows are now being made for a more international audience. So some cultural responses to it have been removed or not filmed. You won’t see much of family members disowning someone over it. The familial guilt trips and beatings are also kept to a minimum. This statement is non-specific intentionally. Every culture is different, so it is naive to say everyone acts the same in response to someone else coming out.

When it comes to Queer Cinema, it’s quite the opposite. In the film “Spa Night,” the main character David is an attractive Korean College student yes. But the story is him grappling with his sexuality in a close-knit community where being in church on Sunday is expected. His way of looking for anything gay is taking a job at a bathhouse and looking at the men engaging in sexual experiences. He is afraid of what he sees, but that fear doesn’t stop him from having his own experiences and learning harsh lessons about life.

The difference is evident from that summary. The subject matter is more mature in terms of content. Many gay films engage in creating a sense of empathy between the viewer and the characters by showing their insecurities. In “Spa Night,” you see actor Joe Seo in various stages of nudity as he compares himself to his friends and strangers. Seeing his average size penis, lack of abs, and height, then seeing the men he compares himself to speaks volumes to his personal view of himself.

You would never see anything of this kind in a BL because of many reasons that create an almost invisible wall of how far is too far. With BLs, the focus of the show sticks to just that, a show. They work within assigned parameters on what is and isn’t acceptable. There are, of course, workarounds for some situations. Things outside of the view of the camera, fade to black, or the lights being off, and you can hear sounds but see nothing. But that’s about as far as a viewer will get in the realm of lovemaking or sex in a BL.

Violence in a BL ranges with the show, but most have a sense of stopping before things get too gruesome. While in Queer Cinema, depending on the movie’s rating, you’ll see everything, including broken bones, mutilation, and so on. It’s because films have much more creative freedom and less censorship, as well as a similar or higher financial budget. I’m not saying gore or not having gore is good or bad. However, we have to remember that there is a limit dependent on what genre is being created.

The content of a BL versus a Queer Cinema film differs in the level the production ventures into it. As well as what exactly the finished product is intended to be. “Red Wine in The Dark Night” features high school students going through love stopped too soon. But these students engage in strong sexual situations and murderous violence. Because it’s a film, these situations are celebrated by viewers as the film going the extra mile to deliver a memorable experience. While in “SOTUS,” the slow burn romance between Kongpop and Arthrit is front and center. We see the characters annoy each other, verbally butt heads, and eventually fall in love, and that’s where the story ends. In fact, that is essentially where most BLs end.

As you can see, the content of the two genres is drastically different. Neither is better or worse for the viewer. At the same time, it’s up to the viewer to decide which show or film is for them. But I implore you to do your own research before watching something. Just because the characters are in college or high school doesn’t mean it’s BL. Many aren’t and contain content that isn’t for everyone. With that said, clicking a title or the start arrow is the true way to learn what you do and don’t like.