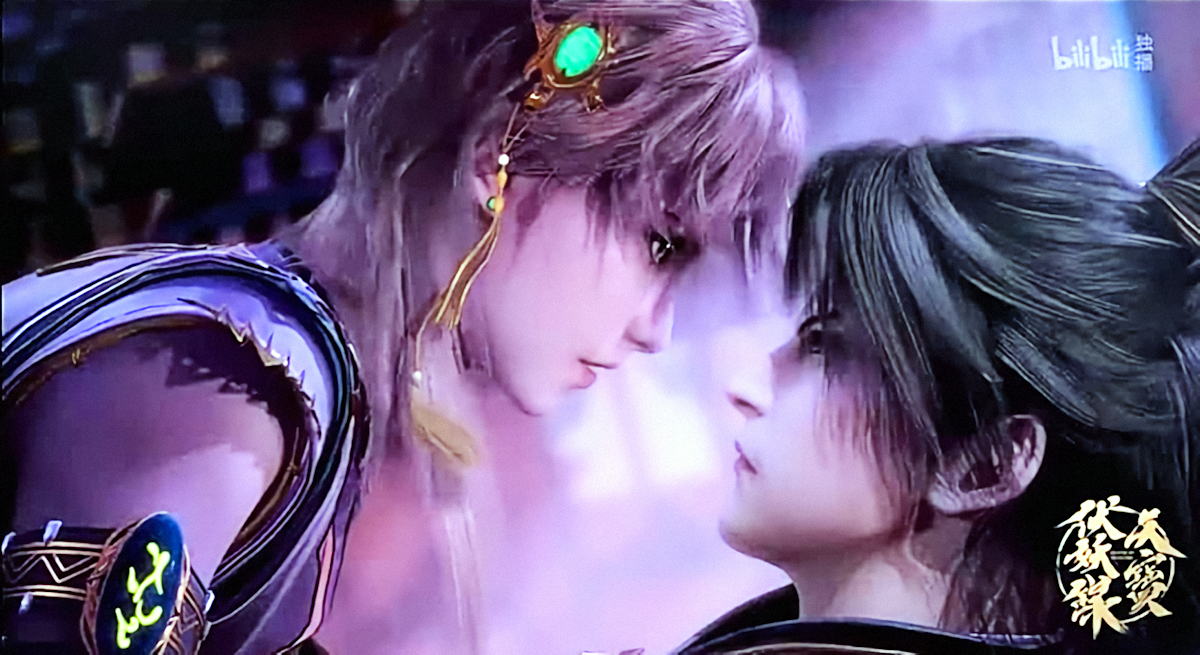 The third episode was pretty hilarious as we get a new line of bare-chested hot men joining the fray to fight the demons plaguing the city of Chang’an. The first interaction between the newly appointed Chief of Exorcism Li Jinglong and his team members goes awry when they tag together to knock him unconscious. Despite that, Li Jinglong is forgiving and puts their differences apart to help Hongjun find the descendants of the great poet Chen Shiyi. Will they find the poet or end up with a dead-end? How will Li Jinglong take control of this group and train them to fight the evil demons?

Ah Tai is a Tocharian nobleman. He is prone to using his handsome looks and flirtatious manner to achieve his goals. Despite that, Ah Tai is a very powerful exorcist and has a mysterious aura. He can call upon the powers of fire.

Mo Rigen is from the Hulunbrier Grasslands. He is an excellent archer and one of the best Exorcists from his grasslands.

QiuYongsi is from the area south of the Yangtze Delta. He is good at calligraphy and drawing. He joins the Court to fulfill his grandfather’s wish and broaden his horizon.

As Hongjun and Zhao Zilong arrives at a dilapidated Court of Exorcism, they are attacked by fellow Exorcist Mo Rigen and have an unusual interaction with the other members. When Li Jinglong arrives at the Court, they mistakenly attack him, and things get out of hand. But Li Jinglong handles things maturely, and they wholeheartedly accept him as their Chief. As Li Jinglong learns about his team members, he also takes initiatives to revamp the Court. Hongjun and Li Jinglong clear their misunderstandings. When he helps Hongjun search for Chen Shiyi, they stumble upon a shocking discovery.

Bilibili certainly has an interesting way of introducing its characters. Watching the faceoff between Mo Rigen and Hongjun, Ah Tai’s flirtatious nature, and QiuYongsi’s shy demeanor, you wonder why these four were selected to be a part of the Court of Exorcism. At least with Hongjun, it makes sense because he is the Demon Prince. I was intrigued as well as amazed by the CGI. The costumes and the characteristics are so vibrant that you are instantly hooked up. I’m looking forward to learning what their powers are.

I appreciate the instant kinship that our four members develop when they work together to overpower Li Jinglong and knock him unconscious. Although I felt bad for our poor Chief, seeing them knock the winds out of Feng Changqing made me crack up. I’m not a huge fan of Feng Changming because he keeps poking at Li Jinglong and belittles him too much. If he does it out of concern or contempt is still unknown. I also enjoyed watching our motley gang’s reactions when they discover that Li Jinglong is the newly appointed Chief of their Court. Their shocked expressions and Zhao Zilong’s instantaneous ramblings are so damn funny; I could not help but laugh at their plight.

Li Jinglong’s reputation is scandalized when he is discovered at a brothel. His relationship with his cousin, Feng Changqing, is tumultuous. Despite being the Deputy General himself, Changqing harbors deep hatred and resentment towards Li Jinglong. Changqing doesn’t believe Jinglong’s when he insists on the presence of Demons in the city and insists on punishment for disgracing their ancestors. It’s obvious from his rude demeanor that bei

They do it unknowingly, and if the hot-tempered Feng Changqing were the Chief, instead, the consequences wouldn’t be in their favor. But Li Jinglong is just and kind. Although he is angry at Hongjun for spoiling his reputation, he asks for clarification and doesn’t hold a grudge against them. Such a contrast of personality in both the brothers! The look on Li Jinglong’s face when Hongjun finally clears his name is so relieved. Li Jinglong is a man of morals, and so his reputation means everything to him.

On the other hand, the team members are confused about why a mortal was chosen to head the Court? They have major doubts related to his temperament and his ability to head the Court. Although they started on the wrong foot, Hongjun is the only one who feels sorry for Li Jinglong.

Despite their misgivings, as soon as the Court is fully renovated to its initial glory, they decide to trust Li Jinglong. The entire team is an unlikely match because each has powers of their own, and Jinglong is a mere mortal. It would be difficult for them to take orders from him because of his standing. Their journey would certainly be interesting to watch simply because of their odd dynamics. Will Li Jinglong earn their trust and gain favor from the Emperor who is simply testing his limits and abilities?

The chemistry between Hongjun and Li Jinglong is palpable. Hongjun is pretty intrigued by Li Jinglong. He is confused about how a mere mortal could break his divine rainbow light and why the Heart Light choose Jinglong as its receptor. I agree with Hongjun’s deduction that Li Jinglong might not be a mortal. His powerful sword is a testament to that. Despite their initial problems, Li Jinglong accompanies him to Chen Shiyi’s residence. Hongjun’s earth-shattering reaction to learning the truth about Chen Shiyi’s present descendant shouldn’t be so comical, but you can’t help adore him. As Li Jinglong explains Chen Shiyi’s past, we get a glimpse of the honest man who stood up against everything unjust. Powerful yet unjust men oppressed him. The fact that Li Jinglong looks like Shiyi’s replica is almost shocking. As they both try to decipher the meaning behind his great poems, they stumble upon the concrete evidence that points towards demons’ existence.

Will Li Jonglong be able to protect the city of Chang’an from the possible attacks planned by the demons? How will he control and lead a powerful team of exorcists? Is Li Jinglong somehow connected to Chen Shiyi, or is he the true descendant chosen by destiny?
Keep watching this space for further updates on this ongoing fantasy anime!