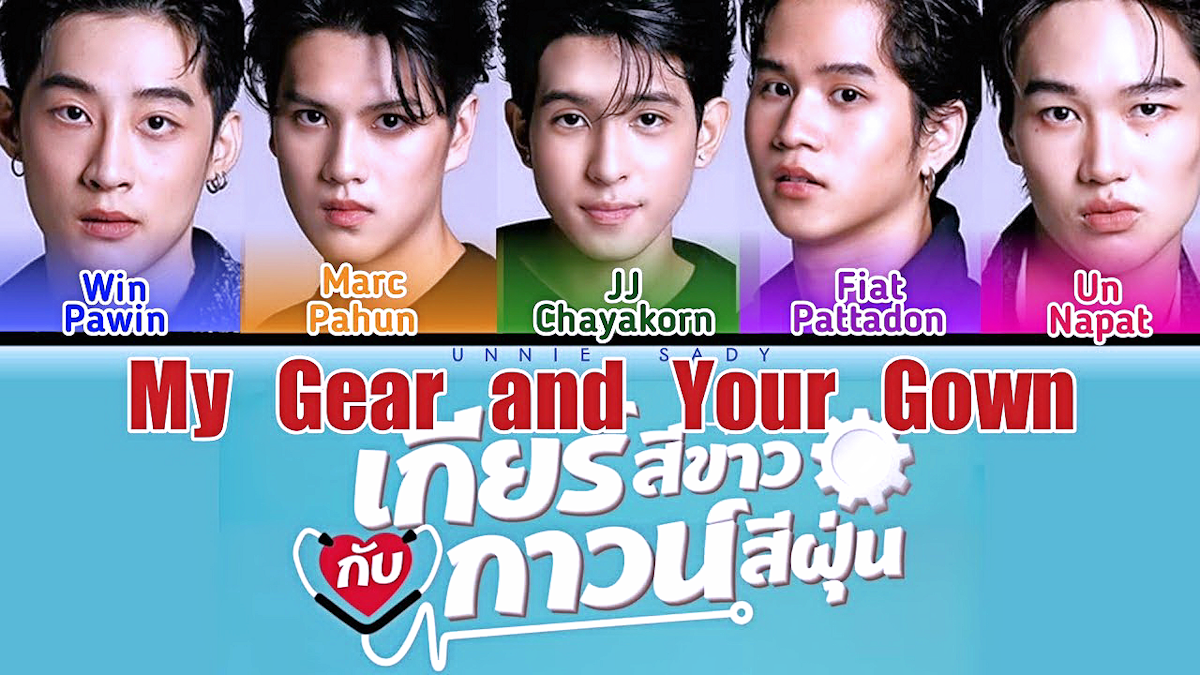 The series My Gear Your Gown premiered on the official GMMtv channel on YouTube on September 14th, 2020. Although I had heard the name some months back, I had not seen any recent promotion or even knew who the main lead of this series was until I hit play. Coincidently, one of our other reviewers, Joshua, was watching it the same time I was, and we got to talking about the series. Surprise Surprise, we had an opposite (OK, not so much) reaction to the show. So we both got writing this review piece together and discussed why I liked the pilot episode, and he did not.

“My Gear Your Gown” is another GMMtv show, the company that has created many great Thai Bls like “SOTUS,” SOTUS-S, etc.  While most shows center around Engineering students, and I’m sure at some point this show will get to that (if the title is any indication), I don’t know why it surprised me getting that familiarity vibe to this show as the episode began—seeing the main girl from “SOTUS” as if she were frozen in amber and hadn’t aged a day in the years since she co-starred in helped with that vibe.

The pairing of a doctor & engineer has been done earlier this year [En of Love], and it did not make much difference to me in terms of the plot. The introduction to the leads was a typical Thai BL style. So we have the meek (type) Pai, a medical student who has gotten LASIK done [does it make a difference?], and we have the Engineering student  Itt, the confident, handsome one [a little rough, but still handsome].

Then the show time jumps back to high school for the main character Pai, after a brief introduction of him in college. I didn’t understand the importance of introducing the show to me as a viewer this way.  If it had been an action scene or something foreboding, then it would have meant more.  But seeing Pai and his friends discussing selecting representatives for something at school, felt common enough not to be used as the jumping place for the story.

The thing about a time jump that keeps the viewer riveted or, in my case, interested is a personal investment in the character.  However, the time jump happened without warning after the credits, and it was jarring.  Instead of the quiet wild-haired college student, Pai is a rich boy transfer-student who seems to refuse nice gestures. Why? I have no idea, but when his driver offers him a ride home, he refuses to the point of being rude about it.  I wonder why they chose to show the main character negatively? Showrunners could run the risk of having a viewer not care about the character.

Probably why the Seme in BLs is the cold-hearted rich boys.  We get to see them from the eyes of the kinder Uke, which endears us to them.

That time jump was indeed so abrupt because until then, I had no clue if Itt and Pai knew each other before or why Itt had to take Pai so far away for just talking? But now we know the story started in high school, and I was a little interested in the show. A nerd and an athlete always make an interesting pairing for me. If only the show also kept it simple that way. But instead, we have a rich, lonely, and very stupid Pai doing whatever he fancies. Itt was supposed to be either a nice person for all or misbehaved and misunderstood jerk. Even after half of the show, I have no clue whether to like either or hate them both. I won’t say Pai is cold-hearted, but he is sure quite shallow, I think. The only saving grace in the show so far is the side characters Waan & Pure.

The cast of the series includes the absent parents of Pai, who leave messages through his maid.  Itt is the handsome athlete who antagonizes Pai every chance he gets.  Pure is Itt’s lackey/friend who seems intent on being just as annoying as Itt but isn’t blessed with any charm.  Lastly, Wan, Pai’s friend.  Wan is enigmatic and self-serving in that everything he does serves his own interests. However, he does seem to care about Pai’s well being. It’s a smaller cast for a ‘first episode,’ but it makes it easier to focus on the moments that matter.  The simple formula of nerds vs. athletes comes into play early on.  Itt and Pure do their damndest to annoy Pai and Wan when forced to share a club

However, this is where it gets interesting for me again. Enemies to lovers trope? OK, I am on board now. Finally, in the last 10 minutes of the show, both actors, portraying Pai & Itt respectively, actually show some potential acting-wise and even the story picks up a little in pace. Right now, I have many theories about the direction this plot can go. The preview for Episode 2 and one scene, in the beginning, hints that they became friends during High School, then what was that indifferent attitude as the college begins? Are the main lead friends going to help like usual supporting cast or create their own mess in the story? Is it going to be all drama first and a happy ending at the end of the twelve episodes, or are we going to see a love story, then side drama, and finally, the reconciliation? Either way, I am definitely hooked to this one for the time being and will wait to see the next episode. I am unsure about the lead actors, but on paper, I like the plot so far. A lot of things could be done differently, so I will wait to watch where this goes.

The plot of My Gear is not new by any means. Rich boy who is neglected by parents acts out and is somehow noticed by the misunderstood bad boy.  It is presented in what feels like random scenes that do not tie into each other very well.  Or that 70 percent of these moments are based solely on Pai being told or asked to do something, and his refusal or need to do the opposite.  These moments make it grating to sit through.

Something as easy as take the expensive car driven by the nice elderly servant seems to difficult for him to do willingly.  So he ran and discovered the reason for the offer of the ride is that there are thugs between his school and home.  On the one hand, he learned a lesson because he had no reason not to take the ride home.  To me, it signifies a two-dimensional character with no real motivation whatsoever. By the end of the show, Pai is going to need to grow up for any firm of happiness is evident.  But will viewers still be watching when he does?

You have to ask, why does the character Pai need to be so obstinate? The other characters seemed more interesting or did more in terms of the actual plot.  Learning that Itt is failing out of school and learning how he believes his teachers see Itt was saddening.  Pure, being an uncaring Casanova who brings girls to the shared clubroom, was a curious twist.  Also, the cavalier Wan, showing empathy, and actual anger, made the side characters memorable.

Much like other GMMtv shows, this one follows a familiar template to an extent.  Showcasing characters and implying beneath their surface are layer upon layer of depth to justify their shallow way of being is not a new concept or one any fan can miss.  What this episode did not do was give me any reason to watch the next.  Its an OK show but nothing new.

Maybe I am just a little too hopeful, and I like my characters flawed (in this case, a little too much) but finally learning to be better people to each other. I am willing to give another few episodes some slack and wait if the series offers something new. Overall, this was nothing close to GMMtv standards in terms of acting or production value. The actors are not newcomers, and even some newcomers have done better under the GMMtv umbrella. It seems like the network’s focus to turn out quality BL was a little lacking here.  Will that be the reason this fails or not is yet to be seen.