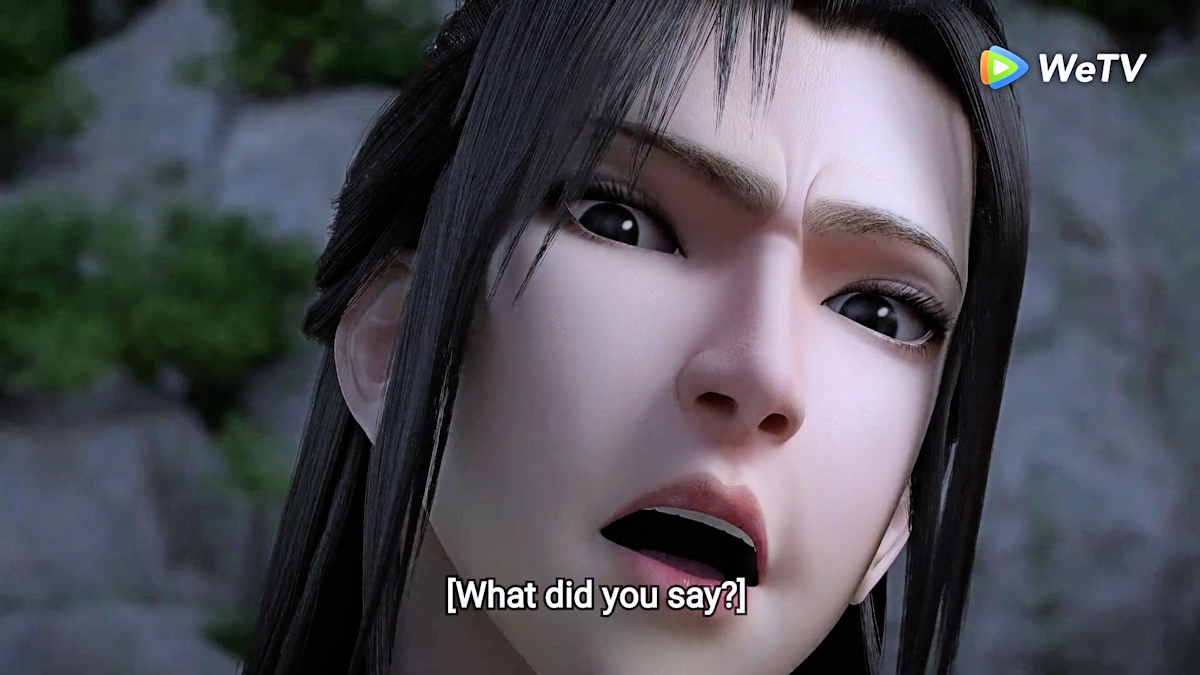 If you are wondering why I choose this picture as the banner image, don’t fret! This unusual picture of Shen Yuan’s shocked expression is currently the most used Twitter Profile Image, as anime enthusiasts worldwide are celebrating his silly attitude and overdramatic tantrums! Scumbag System is leaving me surprised and gobsmacked every week with its stunning visuals and riveting CGI effects. I’m not exactly a huge fan of Chinese BL, but I must admit that their animations are much better than most other anime from the Asian Subcontinent.

As our transmigrating hero Shen Yuan decides to increase his spiritual powers by meditation, a sudden encounter with Shen Qingqiu’s old rival leaves him shell shocked. Despite his ridiculous overtures, Shen Yuan shows him kindness and tries to rebuild the burnt bridge, which leaves the rival both surprised and doubtful. Shen Yuan’s return to the Heaven Sky Clan is wrought with new problems as the Demon Clan ostracizes his disciples, and their Saintess provokes them for a duel. Keeping in mind that he can’t deviate much from the original storyline, Shen Yuan is compelled to take immediate decisions that will either earn him more points or result in a major setback.

Shen Qingqiu’s evil deeds seem to follow Shen Yuan everywhere. While meditating in the Lingxi Caves, Shen Yuan comes face to face with Liu Qing Ge. Qing Ge sees him as a rival, and an unexpected face-off concurs. Because of his unstable aura, Liu Qing Ge is unable to fight Shen Yuan. Shen Yuan decides to win over Liu Qing Ge and turn him into an adversary, all a part of his grand scheme to protect his future self from the clutches of Evil Luo Binghe. When Shen Yuan returns after successfully gaining more spiritual powers, he finds Heaven Sky Clsn in dismay as the Demon Clan attacks them. Sha Hua Ling, the newly appointed Saintess, provokes them for a duel, which Shen Yuan readily accepts. As he wins the first round, the troll system puts a spin to his plans by issuing a new order that leaves him shocked.

Shen Yuan might not be villainous like Shen Qingqiu, but he is certainly quite vain. His sudden duel with Qingqiu’s old nemesis, Liu Qing Ge, should be dramatic but ends up being overtly amusing. Liu Qing Ge seems to be a powerful Cultivation Master who was killed by Shen Qingqiu while he was meditating in the Lingxi Caves. They share a lot of bad blood, and Liu Qing Ge vehemently denies taking help from Shen Yuan. Our transmigrating hero’s nature might be a direct opposite to his predecessor, but he is still in the midst of the game, and Yuan moves his pawn carefully. His sincere attitude and kindness surely leave Liu Qing Ge equal parts amazed and doubtful about his actions. It doesn’t help that Shen Yuan’s demeanor doesn’t match up to Qingqiu, which puts Liu Qing Ge on edge.

Add to the fact that Shen Yuan is over the top, Liu Qing Ge’s doubts seem well-founded. I couldn’t stop laughing when he tries to convince Liu Qing Ge about repenting for his past mistakes and then, in the same breath, mutters about being cringeworthy. Liu Qing Ge spits out blood in disbelief, and I’m amazed at how the storyline toys with Shen Yuan’s annoying overtures. Cultivation dramas always have a serious tone, but Scumbag System is such a lighthearted fun anime that it leaves you smiling. He almost convinces Liu Qing Ge and also earns massive points for reducing Shen Qingqiu’s “grudge meter.” I seriously can’t believe these random terminologies that the troll system comes up with. They are always in sync with the current situation and seem unlikely, but everything boils down to Shen Yuan being victorious, so all is well! Although Liu Qing Ge still doesn’t trust him, Shen Yuan assures him and leaves to meditate again.

The next scene where he meditates won my heart. The CGI effects are so amazing that his ridiculous complaints about the troll system just don’t register in your mind. I kept wondering that if this show is remade into live in action, how would this scene be recreated? Three years of meditation ends in minutes because we are in the midst of an alternate universe. Shen Yuan walks out of the cave to encounter new problems. The fact that he already knows the storyline, again makes me laugh. It’s like watching him direct a show where the entire script in already read and rehearsed. The only concession is the random changes that Shen Yuan is allowed to orchestrate. They either win him points or valid deductions. I was amused by how he compares his meditation period to those in television dramas; Shen Yuan is truly a realistic character.

As Shen Yuan walks out of the cave fully prepared to fight the Demon Clan, he is met with his disciples who inform him that Luo Binghe is in trouble. The way Shen Yuan rushes to save him is endearing. Although Luo Binghe puts up a good fight, he is no match for the demons, but Shen Yuan arrives on time. Even though they are meeting after three years and he is happy to meet Luo Binghe, Shen Yuan has to fake his emotions to match Shen Qingqiu’s rude demeanor. Luo Binghe is relieved to meet his Shizun, and they look so adorable together. Again, Shen Yuan puts a measurable act about facts related to the Demon Clan’s sudden attack on the Heaven Sky Clan. He already knows that the two main female protagonists are to be introduced and are ready to face the consequences.

Thus begins the encounter between the Heaven Sky Clan’s disciples lead by Shen Yuan, and the Demon Clan lead by their newly appointed Saintess Sha Hua Ling. She is beautiful, seductive, and also cunning. In the future, Sha Hua Ling would be a part of the evil Luo Binghe’s harem, and when Shen Yuan looks at Luo in contempt, you don’t know whether to laugh or cry. The poor kid doesn’t understand why his Shizun is glaring at him like that, and I’m enjoyed watching Shen Yuan’s bursting jealousy. According to the storyline, Sha Hua Ling betrays her own clan because she is hopelessly in love with Luo Qing He. So how the hell did she end up being a part of Luo Binghe “3000 Women Harem”?

Although Sha Hua Ling is seductive and charming, she is a villain to the core. She casually brushes aside the destruction caused by the Demon Clan and instead expresses her desire to have a duel between the two clans. Shen Yuan’s decision to follow the script surprised me because I wasn’t expecting him to jump into the battle right away. But he decides to accept the “Three Duels” challenge and successfully wins the first round as well. What cracked me up is Shen Yuan’s casual admission of understanding Shen Qingqiu’s arrogant attitude. The win inflates his ego, and he contemplates fighting the remaining two battles himself, just for the troll system to burst his bubble. The resulting horrific expressions on his face are a whole new experience. I just love how the animation is so in sync with the character’s weird expressions, and they are doing justice to the original novel. I’m hoping to see some romance brewing between Shen Yuan and Luo Binghe because they aren’t humans. At least let the anime characters enjoy some love, even if the Chinese censorship doesn’t allow the same in live-action dramas.

How will Shen Yuan manage the new commands assigned to him by the troll system? Will Luo Binghe manage to fight one of the Demons in the ensuing duel? Will Liu Qing Ge put aside his doubts and help Shen Yuan to fight the Demon Clan?

Join the discussion No Comments