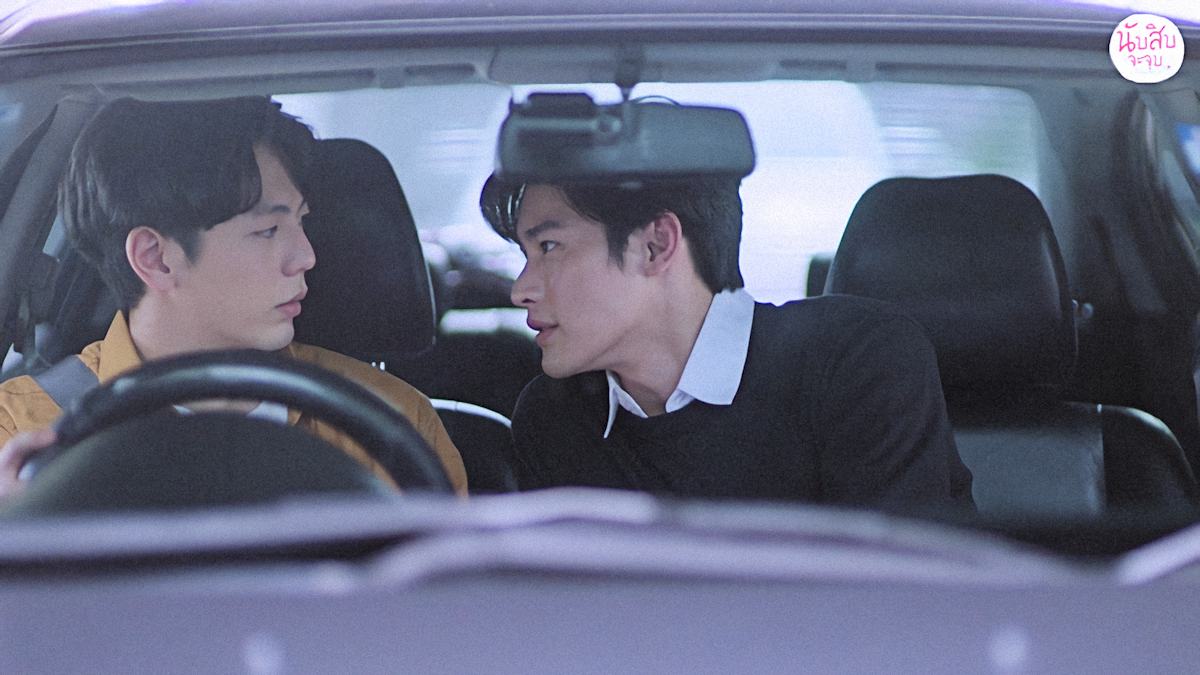 Coming in 2021 from Channel 3 is the new BL series “Lovely Writer the Series,” and it looks like it’s going to be a hit.  Starring new actor Up Poompat as seasoned author Gene, who is trying to get his dark fantasy novel published.  His publisher shuts him down hard and instead asks him to write another Boys Love novel instead.  Why? Because his latest “Bad Engineer” is a big hit.  So big it’s being turned into a series.  Dejected, Gene leaves the office, and the next time we get to see him, he’s sitting at a casting for “Bad Engineer.”  Just when he is about to go to the bathroom, Nubsib, played by BL fans favorite “Kao Noppakao,” begins his audition.  Before Gene can get out of the room, Nubsib grabs him as a prop and delivers a powerful performance stating that the mark he left on the character’s neck marks him as his.  Gene and I (the viewer, me) were speechless from the performance, and that begins the trailer for the show.

I was immediately hooked for it because finally, we aren’t dealing with college or Engineers, but adults and a behind-the-scenes look at making a BL series based on the popular novel “Dozens of Kisses” by Wankling.  The series focuses on Gene and his time with Nubsib.  When asked by a friend to house Nubsib, he is understandably opposed to this.  Nubsib is 20 years old and a complete stranger and writers by nature, like their private safe space.

Nubsib, undeterred by the disgustingly messy apartment, cooks and cleans for Gene and eventually gets to live there.  I love the chemistry of Up and Kao; the two actors play off each other very well, and I found myself giggling along with the scenes as Gene sets a task thinking Nubsib won’t be able to do it. (Produce a piece of toast with heaps of jam) Nubsib does it with ease.  Much to Gene’s chagrin, I chuckled and thought, “It’s just toast, man! Give him something harder.”

The series does something I have yet to see in a BL series and shows a candid look at the behind the scenes world of filming a BL series as Nubsib has to kiss his costar and he can’t seem too.  Gene watching is visibly jealous of this, and my gaydar was dinging.  Gripping his own leg and shifting uncomfortably as Nubsib moved in for the other man’s lips.  Using the behind-the-scenes moments added emotional weight to the trailer as it highlights how hard it can be for a new actor to do a love scene with another man.

Now, this wouldn’t be complete without a dash of drama.  The actor Nubsib was supposed to kiss notices Gene and takes a moment to needle him about his feelings for Nubsib.  Gene is once again speechless because he was caught unawares, and we are given a buffet of scenes of the pair growing closer until Gene realizes what Nubsib is really about.  I won’t spoil it, but the series’ official premise is “Nubsib is a Wolf in sheep’s clothing.”  Any BL fan can tell you what that usually means, or I can. “Seduce you and leave you” I’m not gonna lie; I’m curious how that will go.  It’s obvious Gene has never had a same-sex experience, but under his curmudgeonly writer exterior, he’s a lonely man.  So having a sexy 20-year-old doing everything he can to get him to open up will have disastrous consequences if he does.

Judging from his attempt to kick Nubsib out and Nubsib tearfully shaking his head, so Gene leaves to sob in his car; he gets Gene. This story looks very new, which is something BL fans clamor for.  Of course, there is a bit of drama as people tell Gene to end whatever he and Nubsib are doing, and we get a lovely but interestingly edited scene of the pair having a lovely moment to conclude the trailer.  I say interesting because it’s only 2 shots, instead of the tiresome 3-shot-moment whenever the director wants to make a point, of Nubsib pulling Gene to him. BUT, after a close shot of their pelvises pressing together, continuity deserts the scene, and in the immediate next shot, there is space between them. It drove me nuts; sorry I know, focus on the cuteness; but bad shot selection can ruin the moment seconds before they start talking.

This show is directed by Tee Sintanaparadee, the man who directed the series “TharnType.” (I wish he were directing part 2 as well.) So we can expect a lovingly crafted series with very intimate filming and attention to detail.  The cast themselves are mostly fresh, and new talent save two actors. Kao, who played in “Until We Meet Again.”  The other is Kenji Wasin, who is playing “Hin.”  He also acted in “Theory of Love” and “TharnType.” Here is the rest of the cast, so if you are lucky enough to find a copy of the book, you can put their names to faces.

Personally, I love new talent, and seeing them act in the trailer, none of them seem new to acting.  They all have real talent and bring a lot to their roles, so I am very excited to watch this series when it airs