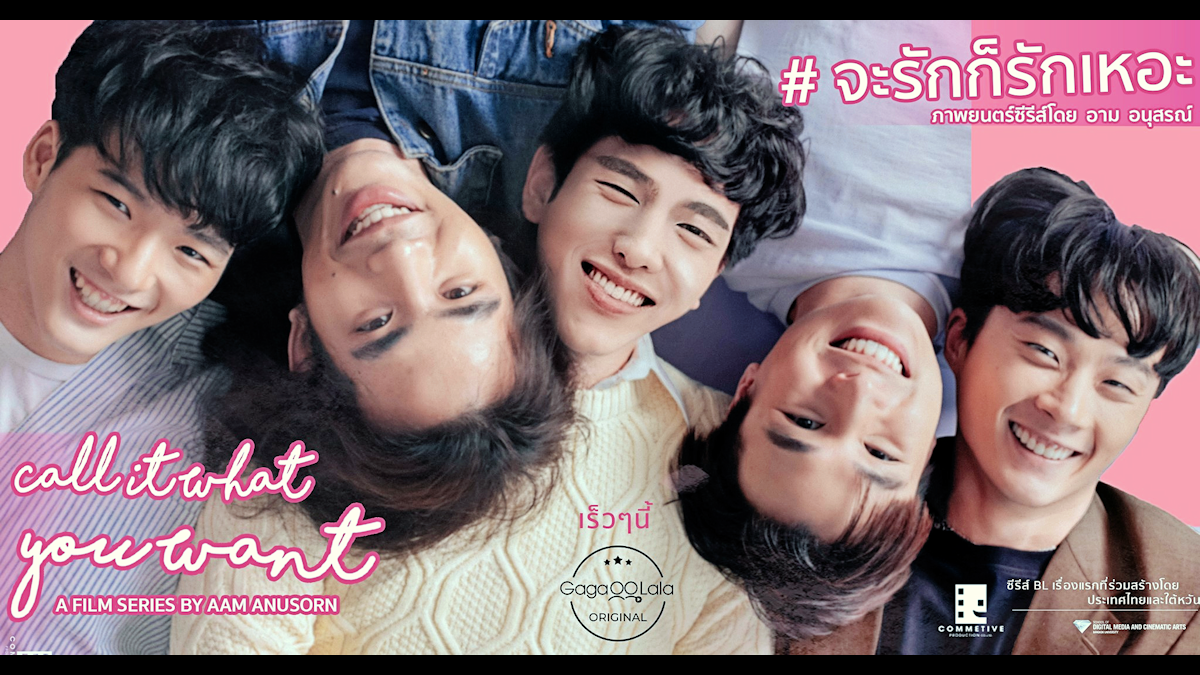 GagaOOLala, as one of the major platforms for LGBTQ+ content, aims to strengthen its presence in Asia by collaborating with filmmakers outside its home country, Taiwan. After penetrating the Pinoy BL industry, GagaOOLala strikes again with its newest production, Call It What You Want, a partnership with Thailand’s notable director, Aam Anusorn Soisa-ngim. The young and talented director who is known for his endearing movies, Present Perfect and Present Still Perfect, as well as the hit BL series, 2 Moons 2, will give you a realistic portrayal of the BL industry in Thailand through the series that will premiere in the first half of 2021.

In mid-2020, director Anusorn has released a documentary short film on GagaOOLala, titled BL: Broken Fantasy, where he talks about the growing BL industry in Thailand. Through the documentary, he highlighted the backstory of people working in the industry and issues that arise within the BL community. And to give more perspective for BL viewers, director Anusorn decided to create a story that revolves around BL filmmaker’s struggle. Telling the story of BL director, James (Time Dhamawat Suntanaphan), who has a secret on-set romance with one of his actors, Ait (Benz Panupun Wongjohn), Call It What You Want the Series will explore the darker side of the entertainment industry, and the pressure actors receive from talent agencies; revealing the corrupted BL industry that is indeed far from perfection.

The series, currently in production, will feature a cast of Thai and Taiwanese actors and be the first Thai BL series produced by GagaOOLala. This new venture will be the second collaboration between the Taiwanese streamer and director Anusorn after his phenomenal movie, Present Still Perfect in early 2020. Since its first announcement, Call It What You Want has gained popularity across social media, making it one of the most awaited BL series in Thailand. Before we see the series’ premiere, let’s take a closer look at the cast, which will surely drive the BL viewers crazy with their looks and talent.

The Full Cast of Call It What You Want

The 23-year-old Thai actor will portray the main lead, Ait, a struggling actor who is trying to build his career in the BL industry. During the workshop that he has with James, the two get closer and develop a romantic feeling for each other.

He first appeared in director Anusorn’s hit movie, Present Still Perfect, as Kham. Making his way back in the industry, Time will play Ait’s love interest, as the character James. James, a director himself, has had a troubled past with his boyfriend.

This experienced actor has played in numerous BL series before and will make his come back to the industry by playing the role of Bas. He is the best friend of Ait, who also works as an actor in the BL industry and is stuck in a tangled relationship with the producer.

The Taiwanese actor and singer Cheng will portray the role of Marco. Secretly in love with his best friend, James, Marco will try his best to get James’s heart and separate him from Ait.

Kaprao previously portrayed Park in 2Moons 2. Kaprao is ready once again to steal BL viewers’ hearts with his new role in Call It What You Want. Playing the role of Kaprao, he will showcase his formidable acting skills, as well as his undeniable charm.

To get more information about the series, you can follow their production process through GagaOOLala social media (@GagaOOLala) or Call It What You Want’s official Twitter and Instagram accounts (@CIWYWTheSeries).

Besides producing a new Thai BL series, GagaOOLala is also establishing a partnership with LINE TV to broaden its presence in Thailand further. Bringing 12 of its original titles to the Thai streamer catalog, both parties aim to broaden their network by gathering more viewers. Mr. Kanop Supamanop, Chief Content Business Officer of Line Thailand, stated that the popularity of Y Series and Boy’s Love on LINETV has contributed to Thailand’s mainstream culture. This popularity evokes viewers’ interest in queer content that features various dramas and romantic themes with intense admiration. Therefore, the partnership with GagaOOLala– the world’s largest Asian-based video streaming platform with a focus on LGBTQ+ and BL content – will promote the awareness of the LGBTQ+ content and undoubtedly bring a wider variety of content for selective viewers.

Here is the list of 12 GagaOOLala films and documentaries that are accessible for free on LINETV:

We at PsychoMilk would like to extend our sincerest congratulations to director P’Aam Anusorn Soisa-ngim for his newest project, Call It What You Want, which we believe will become another success, and to GagaOOLala for its partnership with LINETV Thailand. Hopefully, this partnership will bring more opportunities for talented filmmakers across Asia to create more LGBTQ+ themed series and movies to achieve a broader representation of the community in the industry.